Jessica Ahlquist on the Front Page of the Providence Journal October 11, 2011 Hemant Mehta

Jessica Ahlquist on the Front Page of the Providence Journal

You all saw the front page of the Providence Journal today, right? 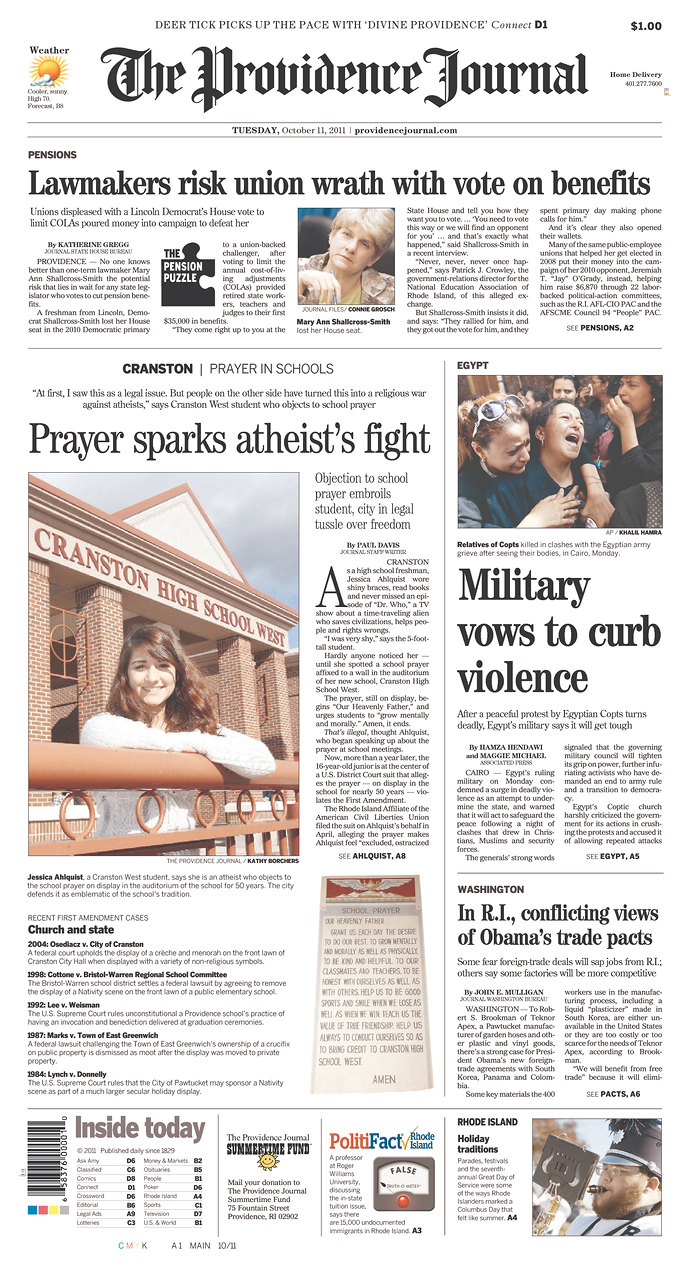 Paul Davis‘ cover story highlights Jessica Ahlquist‘s legal battle against Cranston High School West and how its leaders have stubbornly refused to obey the law and take down the unconstitutional Christian banner hanging in the auditorium:

In March, the School Committee voted to keep the prayer because it is a historic document created more than 50 years ago — along with a school creed, school colors and a mascot — to give the new school an identity and tradition, they say.

The vote was “based not upon some desire to inject religion into the public schools,” but on a belief “that school history and tradition should be maintained,” they argue.

When a friend showed her the school prayer at Cranston West, she told her father, who said, “What do you want to do?”

“I wanted to say something, but I was busy with my final exams, and I didn’t know who to talk to,” she says.

Later, when a school board subcommittee met to discuss the issue, Ahlquist spoke up.

Since then, she says, students and adults have called her a “stupid atheist,” an ACLU tool, a witch and a “media whore.” They’ve also threatened her through e-mails or at school, she says.

A former classmate told her that, if she knew what he really thought of her, she would kill herself, she says.

Ahlquist says she made the statement to stop future threats and insults. She says she never imagined the issue would become so public — and so overwhelming.

“At first, I saw this as a legal issue. But people on the other side have turned this into a religious war against atheists.”

On a day when we celebrate people who go through the challenge of Coming Out and encourage others to do the same, it seems appropriate that Jessica is honored as someone who has shown little fear making her views (and her understanding of our Constitution) known to the public. She’s not afraid of saying she’s an atheist no matter how many threats Christians throw her way. She’s not afraid of saying this banner, as popular as it may be, has no business hanging in a public high school.

She’s an inspiration to a lot of us and I wish her luck (and a level-headed judge) this Thursday as she heads to court to defend church/state separation.

October 11, 2011 Bill Maher Talks About Mormonism on The Rachel Maddow Show
Browse Our Archives
What Are Your Thoughts?leave a comment