Richard Dawkins is Banned by the Wyndgate Country Club in Michigan

You know, if your country club is fortunate enough to host Richard Dawkins, you ought to offer a discount to his publishers. He’s going to draw a huge crowd, talk about the importance of science education, and get your company a lot of free (positive) publicity.

If you’re afraid he’s going to offend religious clients, then you shouldn’t offer him a contract in the first place.

I don’t know why that would even happen right now. His latest book, The Magic of Reality, isn’t a rant against religion. It’s an homage to science and it’s aimed at children — what a wonderful lesson to teach them! — and if religion gets mentioned, it’s because it’s a casualty of honest inquiry.

So you can guess what happened…

The Wyndgate Country Club in Rochester Hills, Michigan… terminated the agreement after the owner saw an October 5th interview with Dawkins on The O’Reilly Factor in which Dawkins discussed his new book, The Magic of Reality: How We Know What’s Really True.

In a phone call to CFI–Michigan Assistant Director Jennifer Beahan, The Wyndgate’s representative explained that the owner did not wish to associate with individuals such as Dawkins, or his philosophies.

Oh no! Not educating children and imparting scientific wisdom! We can’t have that in Michigan!

(And seriously? Based on his O’Reilly appearance? The only thing I learned from watching that is that Bill O’Reilly has no business ever teaching children anything.)

I looked at the club’s website. Nowhere on it does it say “Atheists aren’t welcome.” 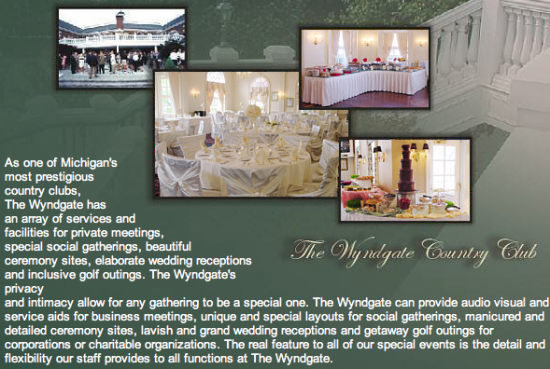 It’s important to note that while Wyndgate is a privately-owned business, it is “open to the public for special events and occasions.” That means they can’t reject Jewish people who want to hold a wedding there, or an African-American family holding a reunion party … and they shouldn’t be rejecting an author’s book tour event because he happens to be an atheist.

You know exactly the uproar that would occur if the owner tried to ban a Christian author who was paying the full rental price for an event and already signed the contract. Every Christian group in the country would be calling for a boycott on the company, holding protests outside of there…

Watch what happens now. The same people will probably jump to the owner’s side, defending his irrational decision.

***Update***: There’s a petition calling for Wyndgate to apologize here.

October 10, 2011 Richard Dawkins' Introduction Honoring Christopher Hitchens
Browse Our Archives
What Are Your Thoughts?leave a comment