Is This an Unrealistic COEXIST Sign? October 9, 2011 Hemant Mehta

This image has been making some rounds on Facebook and found its way into my inbox: 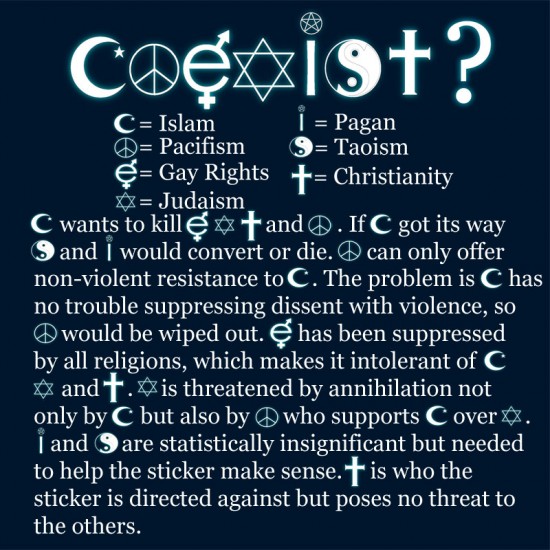 It looks like a funny response to the image until you start reading it and find out its Christian propaganda.

Do Muslims want to convert or kill non-Muslims? The Koran says yes, but (obviously) most Muslims don’t accept that. The same goes for the Bible, with all of its violent passages. We’re fortunate that in the cherrypicking that religious people do, most come to their senses when it comes to killing non-believers.

Gay people are far from intolerant of the religions that do everything they can to suppress them. Part of the reason some progressive Christians don’t fall in line with the Christian bigots is that they are fully aware of the gay Christians in their presence. They’re in no need of being “cured” and the Christians know there’s no good reason to deny them equal rights.

It boggles my mind why any gay person would continue to be part of a faith that wants little to do with them, but for whatever reason, a lot of people in the GLBT community still go to church.

And then there’s that last sentence. Christianity “poses no threat to the others”? Really? Christians aren’t an obstacle to gay rights? Christians wouldn’t close down every abortion clinic in the country given the chance? Christians aren’t trying to turn their religious beliefs into law? They’re not ruining science education in this country?

They may not be killing everyone in sight, but there’s a reason there’s so much pushback against the faith: They’re a huge threat in America.

Coexisting is a nice theory, even if there are good arguments as to why it’s completely unrealistic. But the things written on this poster are the wrong arguments.

(Thanks to Liz for the link!)

October 8, 2011
How Did the Protest of Pastor Mark Driscoll Go?
Next Post