Despite His Health, Christopher Hitchens Is Still As Awesome As Ever October 9, 2011 Hemant Mehta
Patheos Friendly Atheist. ... Want more from the Friendly Atheist? Get our FREE Newsletters and special offers!

Despite His Health, Christopher Hitchens Is Still As Awesome As Ever

I missed his talk at the Texas Freethought Convention/Atheist Alliance of America convention this weekend, but it sounds like Christopher Hitchens was in excellent form even if his health didn’t match his verbal ferocity. PZ was there and said this:

He was looking frail and thin, his voice was husky, but he was amazingly strong. He gave a wonderful, fiery, eloquent acceptance speech, and then he took questions for almost an hour — and he was willing to go on longer and seemed grateful for an opportunity to talk to the public again. He was fierce, courageous, and well-spoken as always, and kept the audience awed and inspired the whole time.

Hopefully, video of his talk will come out soon.

You want evidence of how awesome he is? Despite the massive crowd wanting to get a little bit of his time, he spent fifteen minutes speaking with an inquisitive 8-year-old girl:

Though he was asked a variety of questions from the audience, none appeared to elicit more interest than the one asked by eight-year-old Mason Crumpacker, who wanted to know what books she should read. In response, Hitchens first asked where her mother was and the girl indicated that she was siting beside her. He then asked to see them once the presentation was over so that he could give her a list.

As the event drew to a close, Mason and her mom, Anne Crumpacker of Dallas, followed him out. Surrounded by attendees wanting a glance of the famed author, Hitchens sat on a table just outside of the ballroom and spent about 15 minutes recommending books to Mason.

You can see his recommendations here. 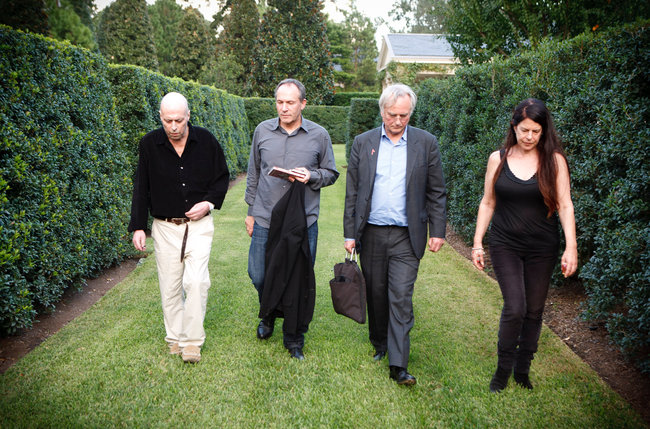 Mr. Hitchens is gaunt these days, no longer barrel-chested. His voice is softer than it used to be, and for the second time since he began treatment, he has lost most of his hair. Once such an enthusiastic smoker that he would light up in the shower, he gave up cigarettes a couple of years ago. Even more inconceivable to many of his friends, Mr. Hitchens, who used to thrive on whiskey the way a bee thrives on nectar, hasn’t had a drink since July, when a feeding tube was installed in his stomach. “That’s the most depressing aspect,” he said. “The taste is gone. I don’t even want to. It’s incredible what you can get used to.”

I had the opportunity to meet him about five years ago, just before the release of God is Not Great. I remember asking him how his book was going to be any different from Dawkins’ The God Delusion.

The response was short and to the point: “It’ll be better.”

And he was proved right (at least by one metric) when his book went to the top of the NYT Bestsellers list a few weeks after it was released. 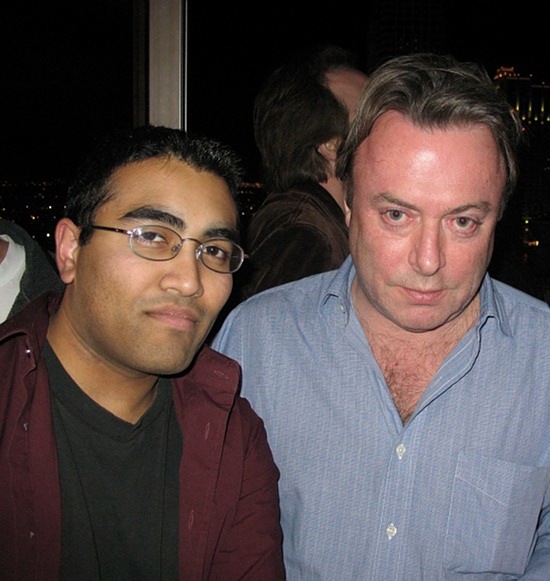 (Thanks to George for fixing the red eye in my picture!)

October 9, 2011
A Group for Atheists in the South
Next Post

October 9, 2011 Just Give Me Until December 26th...
"I agree. It's an easy verse to take out of context. When it was written, ..."
Trystin Beaumont Should Two Oregon Educators Be Fired ..."
"The national debt in 1960 was 53.01% of GDP. Today, the national debt is 130.05% ..."
Trystin Beaumont Christian Nationalist Preacher: God Will Soon ..."
"God I miss hunting. Unlike the US I can shoot as much as I like ..."
guerillasurgeon Rick Wiles: A “Satanic Zionist Power” ..."
"That's sure some efficient and dense racism. Possibly straight nazism."
painedumonde Rick Wiles: A “Satanic Zionist Power” ..."
Browse Our Archives
What Are Your Thoughts?leave a comment