How Did the Protest of Pastor Mark Driscoll Go? October 8, 2011 Hemant Mehta

How Did the Protest of Pastor Mark Driscoll Go?

It slipped my mind that today was the day the University of Georgia Atheists were protesting Pastor Mark Driscoll‘s event… until I started seeing 349723 comments coming in from Christians trolling the informational post. 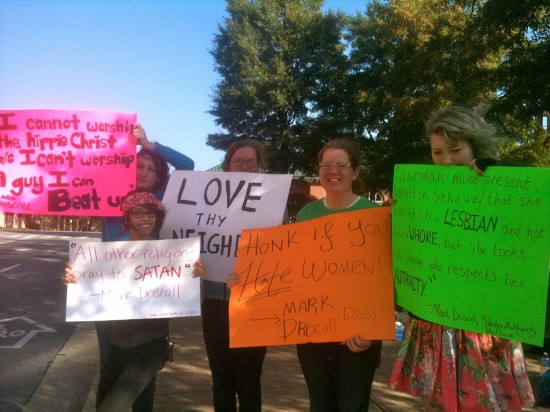 Well, they caught Driscoll’s attention. He even told his fan club:

If you read through those comments, you’d get the impression the atheists were trying to start a riot… which they weren’t. They just wanted to inform the attendees at the LoveLife Conference about the awful things Driscoll says and believes, the things that tend to get looked over by casual Christians who don’t really know him because he puts the word Pastor in front of his name.

Check out some of the comments from that thread (spelling left unchanged):

Meanwhile, here’s how protest organizer Lisa Lansing described to me what they did… surprise! It’s a world of difference from what the commenters made it out to be:

We had around 10-15 people show up, and maintained a peaceful protest atmosphere. We passed out fliers, copies of sermons, and had a few discussions with attendees and people walking by the Classic Center. Most of the attendees refused to acknowledge his sexism, even when presented with evidence taken directly from his church website. The local churches who hosted the event even invited us in to listen to Driscoll preach, [but] we declined and told them we had listened to and read hours and hours of sermons, and seeing him in person [didn’t] change our position against bigotry.

A few more pictures are below. Click on them for larger versions: 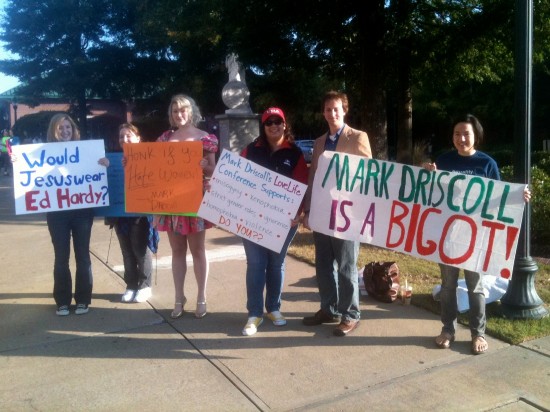 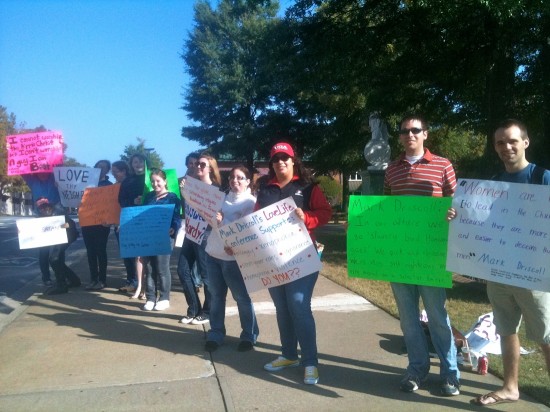 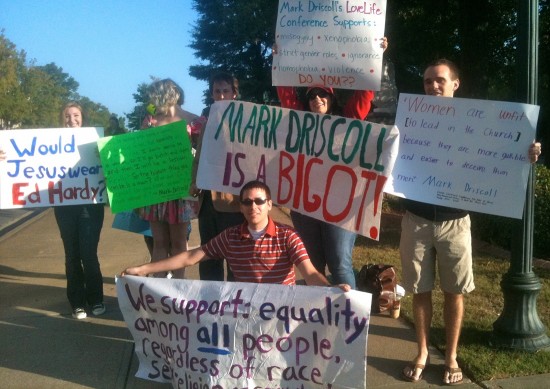 Looks like the atheists were able to get out their message and their mere presence was enough to get Christians to label them as some sort of hate group. Despite the fact that many of those posters contained direct quotations from Driscoll.

October 8, 2011
I Guess They're Taking 'Hallowed Be Thy Name' Literally...
Next Post