Bill O’Reilly: ‘I Don’t Believe a Meteor Crashed Into the Earth’

Richard Dawkins, promoting his new book The Magic of Reality: How We Know What’s Really True, appeared on The O’Reilly Factor a couple nights ago…

If you haven’t seen the clip, here’s the spoiler: It went down exactly how you would have imagined it.

As usual, Bill O’Reilly‘s ignorance of science was in full bloom:

Dawkins: How can it possibly help to postulate a divine intelligence to explain something complicated like [the origin of existence]?

O’Reilly: Here’s how it can help. If you believe in the teachings of Jesus, or Buddha, or someone like that who wants people to be peaceful and to love each other, that is a good thing.

Dawkins: Yeah, but what’s that got to do with the origin of the moon?

Dawkins made the ultimate mistake: he thought O’Reilly was raising legitimate questions out of his own curiosity instead of just talking out of his ass… and he tried to answer them. It’s a waste of time. O’Reilly doesn’t care about the answers. He just loves raising the talking point. Whether it’s correlating atheism with violence or stating how he doesn’t accept the scientific consensus on various issues, he loves to play devil’s advocate to anything an opponent says… no matter how sensible the opposition might be. It’s amazing Dawkins didn’t just give him the Dave Silverman look the whole time: 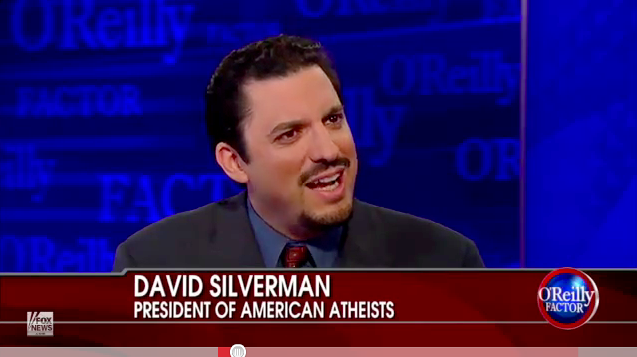 October 8, 2011
Even Boys Can Be Victims of Christians' Unhealthy Views About Sex
Next Post