Hate the Sin, Beat Up the Sinners October 7, 2011 Hemant Mehta

Hate the Sin, Beat Up the Sinners

Jerry Pittman Jr. and his boyfriend Dustin Lee recently visited Grace Fellowship Church in Fruitland, Tennessee — the church Pittman’s father leads — and they had greeters waiting for them:

“I went over to take the keys out of the ignition and all the sudden I hear someone say ‘sick’em,” the younger Pittman explained.

“My uncle and two other deacons came over to the car per my dad’s request. My uncle smash me in the door as the other deacon knocked my boyfriend back so he couldn’t help me, punching him in his face and his chest. The other deacon came and hit me through my car window in my back.”

Pittman added that even after officers arrived, the deacons continued yelling anti-gay slurs. 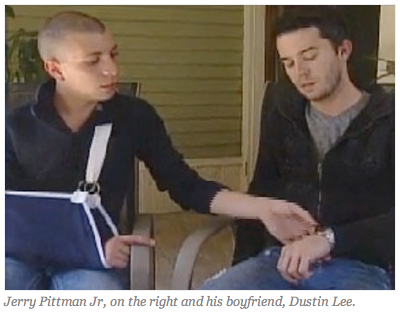 Charges were filed and I don’t know how Pittman (Sr.) could possibly get away with this. But even if he slips through the cracks, it turns out he’s being charged with theft, too:

Police in the nearby town of Trenton said Pittman’s wife asked them to investigate reports that someone had been stealing from her business, and they believe Pittman and another man took hundreds of pounds of copper, valued at more than $1,000. There were at least three incidents of theft, police said.

What’s the worst part about this story? That he’s a pastor? That he commanded others to do the assaulting on his behalf? That the uncle and deacons listened to him? Or that he’s the victim’s father?

And where are the members of the church speaking out against the pastor? Or are they just going to sit their in silence and hope this whole thing just goes away fast?

More evidence that Christianity is not synonymous with morality or kindness.