An Atheist Goes to a Christian Men’s Conference (Part 2)

This is a guest post by Don Cook. Don lives in Burleson, TX (birthplace of the famous “See You at the Pole” event) with his wife and two sons. He works in the IT field.

You can read Zachary Moore‘s experience at a different Christian Men’s Conference here.

I knew I would be excited when the moment came, but as the hour of departure neared I found that I was actually nervous. In just a few short hours I would be driving north for forty-five minutes to do something that I haven’t done in over twenty years: visit a church.

A few questions ran through my head on the way there. What will I do if I’m put on the spot? Should I come up with an elaborate back-story just in case? In the end, I just decided I’d wing it, but I promised myself I wouldn’t tell anyone that I was an atheist –- I didn’t want to open myself to a barrage of proselytization. My friend Jonathan joined me on the trip — he doesn’t consider himself a “religious man,” but he does believe in a higher power. I wanted to bounce my thoughts off of him and get a second perspective. Also, if nothing else, I figured I could easily outrun him in case the torches and pitchforks come out 🙂

When we pulled up to Milestone Church in Keller, TX at 6:00p, the scheduled start time, I was surprised to see a large number of men already there: We estimated about 300 in attendance, though “official” numbers said there were closer to 500. They were all here for a men’s event titled “Meat, Message & Mayhem.” Even though we arrived at the listed starting time, it seemed like everyone else had come hours earlier. They were right in the middle of what I would call a “Man Carnival.” There was a large JumboTron type screen playing the Broncos-Packers game, a pretty elaborate football throwing contest with stand-alone targets, a large target hung from the church building itself, a beanbag toss, and a mechanical bull (hey, this is Texas after all). As expected, there wasn’t a female or child in sight — it would stay that way for the remainder of the event. 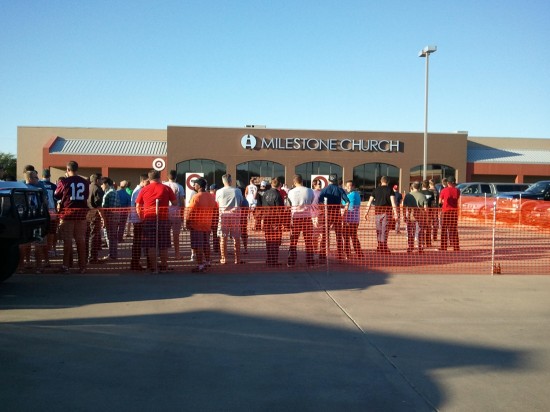 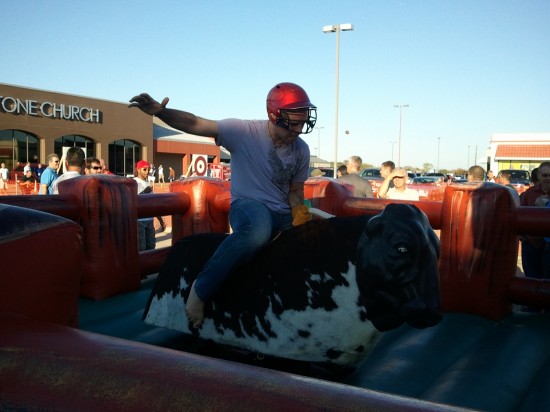 Not really knowing what was going on at this point, Jonathan and I made our way to the church entrance where a few other guys were hanging out by the doors. Inside I could see the local barbeque restaurant that was catering the event preparing the food. Shortly after 6:00p they opened up the doors, instructed us toss our $10 in a large trash can, get a plate of food, and find a seat in the church auditorium. We found a table near the front and center of the stage — a perfect seat, as far as we were concerned. 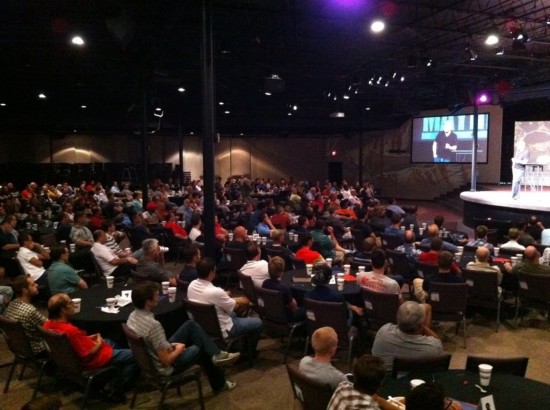 Before I even had my first bite of brisket, I had a small “What the hell…?” moment when a guy came walking through the room with a shotgun. For a second, I thought I had been identified and that Jonathan was going to become my human shield… until they said that the gun was a prize for whoever managed to win the football throwing contest outside.

We were joined at our table by three other guys. As we engaged in some small talk, a “man montage” played on a loop on the two large projection screens on either side of the stage — Basically, just Internet clips of various sports plays and random hunting videos. I’ll admit, though, it was a bit strange eating barbeque while watching a man get mauled by a cheetah… The guys at our table asked us a few questions. Where are you from? Have we been to their church before? and What church do we attend? I just replied with, “We’re in between churches at the moment” and they let it slide.

As we chatted, I noticed some small cards on the table. We were supposed to fill them out with our names and email addresses so that they could be entered into a raffle for the opportunity to win “manly” prizes: a $500 grill, a TV, a golf club… and that shotgun. We finished our meal and that’s when the pastors came up on stage.

They started by announcing the winner of the grill, which was the man who stayed on the mechanical bull the longest (56 seconds). The winner of the football throwing contest was announced and he won the shotgun (a Remington Model 870). The golf club had to be earned — they drew some names from the box and those guys had to get up on stage and try to hit a practice golf ball across the room into the camera area.

Things became far more elaborate when it came time to give away the TV (a 40” Sony Bravia). Two names were drawn from the box, and it was announced that we were all going to see a real MMA fight on stage. They brought up two amateur MMA fighters — one of whom was a member of the church — and the two fighters were matched up with the raffle picks. The fighter who won the match was going to win the TV for his partner. Even if the fighters were amateur, the staging was not. There were fancy lights, entrance music, and a referee. 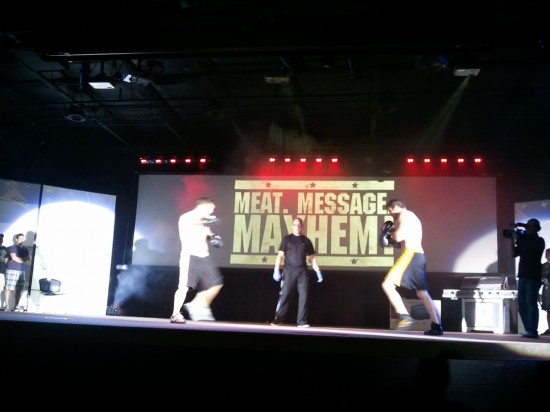 Since this wasn’t a sanctioned event, they weren’t going to beat each other to a pulp, but to make it more interesting, they were each given comically huge boxing gloves which made the whole event a little more entertaining. 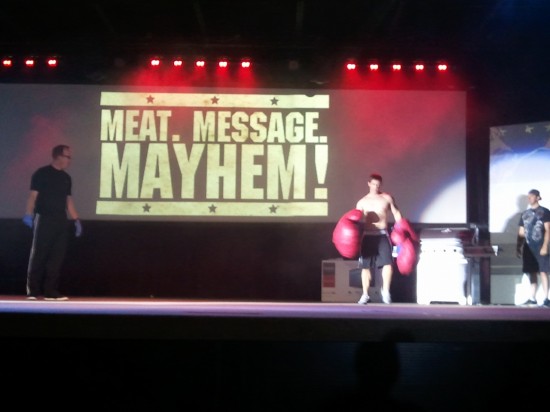 After the fight was over and the prizes were gone, there was a small break before the head pastor, Jeff Little, came on stage. At this point, I’d been at the event for over an hour and a half and had only heard one remotely religious statement, and even that was a just lame joke about a golf club. Because of that, I expected to be listening to the head pastor preach for the next two hours… Thankfully, he was just there for 30 minutes. With that, the event was over.

I predicted he was going to continue with the “manly” theme during his sermon and that’s exactly how it played out. As he walked up on stage, a clip from the movie Gladiator played on the screens — somehow, he tied it into the Bible. I’m still not sure how, since I didn’t see any connection between the two. As he spoke, he kept trying to convince the crowd that he knew what we, as men, had to deal with. I heard a lot of “I know what you go through” and “dude” (because, you know, he was hip.) He spoke a lot about marriage and our careers, sounding more like a therapist than a pastor at times. He even made a joke about men telling their wives during an argument, “But the Bible says you are to submit! It says it right there! It’s in the Bible!” He followed that up with the sarcastic question, “Yea, how’s that working out for you?”

After talking about raising children and his own memories with his father, he told us that if a man lived for Jesus, it didn’t mean he couldn’t be masculine. In fact, the single best thing a man could do for his family was to give himself to Jesus. The last five minutes or so were spent with everyone’s head bowed while he prayed to Jesus for everyone there to be granted strength in their marriage and careers. He even “saved” a select few from the crowd if they had asked for it. This was the only part where he actually sounded like the quick-tongued pastors I’m used to seeing.

So why did this church put on the event? I had watched a few videos on Pastor Jeff Little’s blog and they gave me a little more insight into the answer. He wanted to draw more men to his church because he felt they have more things to bring to the church, like money and “man skills.” He also believes that if a man, being the head of the household, gave his life to Jesus, then his wife and kids would likely follow suit. However, from what I could gather, a lot of the people who were there were already members of his church, so I’m not sure if he accomplished his goal.

In any case, they went to great lengths to “man” up the whole event. Even though I knew there was going to be preaching involved, I was very surprised that it only amounted to about 20% of the total time. This was the first time they had done anything like this, but they plan on making it a twice-a-year event. Honestly, if they could draw hundreds of men to a first-time gathering complete with barbeque, mechanical bulls, football, guns and Jesus — in Texas — I doubt they’ll have trouble getting more men to come the next time around.