What Would Happen if a Mormon Woman Fell for an Atheist Philosopher…? October 5, 2011 Hemant Mehta

What Would Happen if a Mormon Woman Fell for an Atheist Philosopher…?

This is the first line of a description for the book A Lost Argument: A Latter-Day Novel (Strange Violin Editions):

The summer after her freshman year at all-Mormon Brigham Young University, Marguerite Farnsworth falls in love with philosophy by way of falling in love with an atheist philosophy student.

Author Therese Doucet has some experience with the subject since she’s an ex-Mormon herself. She was kind enough to offer a slightly risqué excerpt from the novel (see below) and she’s giving away a free copy of the book to one reader! (More on that in a moment.) 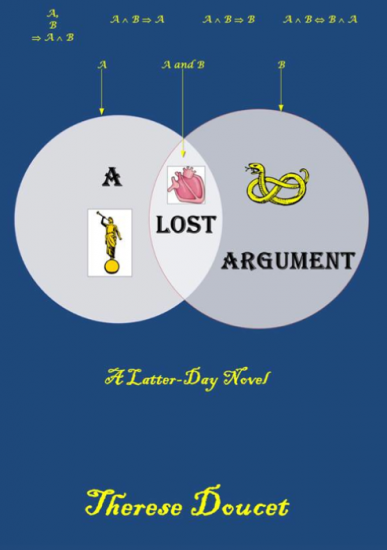 A little flustered by the attention, Marguerite said, “Well, I doubt you’ll convince me, but I’m not afraid of any arguments. The truth is the truth, and it should hold up no matter what anyone says.”

“Ah, well. That all depends on how you define truth. But come here, come sit by me, and let’s talk.” Damon patted the bench next to him.

Marguerite complied and scooted further down the bench to sit closer to him.

“What makes you believe in God, first of all? What reasons do you have for believing?”

“Well–” she blew air out of her mouth. “Where to start. There are so many reasons. The scriptures, of course, they say He exists and loves us. Then there’s so much beauty in the world, and so much goodness in people. There’s the fact that I was raised around a lot of people who believe, and it’s hard to imagine they could all be wrong.”

As she listed off reasons, he countered them. The scripture were flawed historical documents–why trust them anyway? Why should any human being be trusted solely on the basis of the authority he claimed to have from God? What about all the evil and ugliness in the world? All these things she called evidence were ambiguous and could be interpreted multiple ways. How could she be sure it was God and not something else, or pure coincidence behind them?

But Marguerite had an ace up her sleeve, and now she brought it out: There was also such a thing as personal revelation through spiritual experience. Mormons, Marguerite included, believed if you prayed, God would let you know through spiritual feelings the Church was true and He was real.

“Interesting,” said Damon, “but if that’s so effective, then what are you doing sitting here talking to me? If God came down and told you He exists, then why should you have any doubts about it?”

Marguerite hesitated. “I suppose it’s not as clear as God coming down and telling you what’s what–I mean, it’s never been that clear for me. Joseph Smith, the founder of Mormonism, did have a vision where God came down and said, ‘This is my church,’ but for me and most of the people I’ve talked to about it, it’s more like a feeling you get when you pray–a feeling of peace and calm and rightness.”

“So I guess you’ll say that’s just another ambiguous piece of evidence like all the rest, because it’s just a feeling.”

“That’s pretty much what I was going to say.” He grinned. “This is going to be easier than I thought. You’re doing all the work for me.” His face sobered. “But you know, this is serious stuff. This is your life here we’re talking. We only live once, and it’s tragic, don’t you think, to waste it on something that’s not for real and give up your happiness because someone guilted you into believing in an imaginary God who’s going to punish you in the afterlife if you don’t obey. Aren’t you worried about that?”

Marguerite shrugged and tried to think of a way to answer him. While she was still considering it, Damon asked what kinds of things Mormons believed anyway–what sort of commitments and sacrifices did her belief system entail? Marguerite listed off the usual roster of don’ts, but when she got to the part about staying a virgin till you were married, Damon, who was already starting on his third beer, howled in protest.

“No, that’s not for real. You’re shitting me. Excuse my language. So, you’re telling me you’re still a virgin? A girl as cute as you?”

“So, if you can’t have sex, how far can you go? Is oral sex okay? Can you get naked with your boyfriend? Can he feel you up?”

“I don’t have a boyfriend. And I guess the answer would pretty much be no.” She was still in shock at having heard the phrase “oral sex.”

“Oh, that is tragic. So all you can do is kiss, basically. God, that must be incredibly frustrating.”

“Well … I don’t know … I’ve never had a real boyfriend exactly, not what most people would consider a boyfriend. The truth is, I’ve never even French-kissed. Although that’s allowed, I think.”

Damon looked thunderstruck. With an expression of mingled pity, anger, and disgust, he said, “Now that’s just obscene. We really have to do something about this. I mean, doesn’t this upset you? Don’t you want to be with someone?”

Marguerite wouldn’t meet his eyes. “Well, yes, I mean–yes. But it’s not so bad. At least I never have to worry about getting pregnant or getting some awful disease. And in a way I kind of like it–the purity of it. It’s nice to feel naive and innocent, relatively speaking. And … I like the idea that I’m saving myself for my future husband, for someone who’ll love me enough to want to be with me for the rest of my life, and for eternity.”

Damon leaned back and rubbed his chin with the fingers of one hand. Then he said slowly, “But what if you never get married? Or worse–what if you get married and it turns out you’re sexually incompatible? I mean, if you can’t even fool around before you marry him, how do you know you’ll like how he does it to you?”

Marguerite struggled not to show how uncomfortable this phrasing made her. “I always thought that was sort of a myth–sexual compatibility, I mean. Everyone always says you can work on those things. If you have your whole life ahead of you to work on it together, surely you can get good at it at some point?”

“I hate to break it to you, but that’s not how it works. In any relationship, it’s an ironclad rule that the sex is best at the beginning, and it’s all downhill from there. Because in the beginning you’re all excited, and it’s new and it’s hot and you don’t know what to expect. If it’s lousy to start with, you’re in for a very long marriage full of bad sex, or more likely, no sex at all, because you’d probably just give up on it at some point. So you better be pretty sure it’s going to be hot with a guy if you’re planning to stay with him for life. And how can you even get a sense of that if you have no experience beforehand?”

Marguerite at last managed to look up and meet his eyes. “Luckily, I have a good imagination.”

I’m not asking for your personal scandalous stories… but I’d love to know how your views on sex changed from back when you were religious to after you came to your senses.

Leave your thoughts below, and if you’re interested in winning a copy of the book, put the word “Palmyra” at the end of your comment. I’ll choose one winner at random next week!

October 5, 2011 An Atheist's Heartfelt Love Song
"The first version of Microsoft BASIC was written in part on a PDP-10 owned by ..."
Mike Meredith For Many Christian Women Raised in ..."
"Computers and laziness.It's marginally easier to parse numbers without commas and marginally easier to output ..."
Mike Meredith For Many Christian Women Raised in ..."
"Be careful what you wish for. Menopause kicked my a$$. :/"
GrandmascienCe MAGA Cultist Eric Metaxas: Reject the ..."
"There's a grifter born every minute, and needs a church to take the suckers in."
se habla espol Court: Anti-LGBTQ Church Can Purchase Iconic ..."
Browse Our Archives
What Are Your Thoughts?leave a comment