Quick: What are these?

Rebekah Kuschmider of the Washington Times found that out when she went shopping recently:

I saw a bag of candy corn in the prematurely erected Halloween display in my grocery store, and needless to say, I had to get closer to investigate this… when I got closer to the display I realized the bag I saw contained not loose candy corn that could be scooped up by the fistful, but the individual baggies appropriate for handing out to trick-or-treaters. And upon further examination, I saw that it wasn’t even called candy corn: it was called Jesus Harvest Seeds and each individual baggie was emblazoned with a Bible verse. 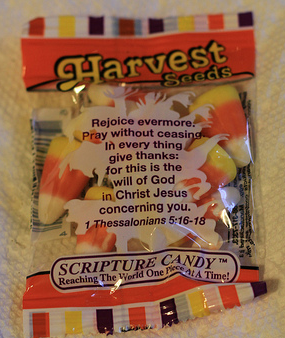 Kuschmider is having none of it:

Never mind the mind-melting comic potential of a product called “Jesus Seeds”, the concept of Bible candy meant to be handed out to kids really, really bothers me. Actually, no. What bothers me is the idea hat someone might hand it out to my kid. Because I’m not Christian, I’m not raising my child Christian, and I don’t want anyone else trying to convert him to Christianity when he’s still young enough to trick or treat. There will be plenty of time for the evangelically minded to proselytize to him when he reaches the age of majority, thank you very much.

When people proselytize to children, they’re admitting they have no real arguments. They won’t even try to go after intelligent people who might offer rebuttals, or ask questions, or laugh in their faces. So they go after the innocent, the kids who will believe anything they’re told. It’s the mark of a weak faith to give these candies to children.

That’s why I suggest handing these out during Halloween… you know, to counteract all those irrational candies 🙂 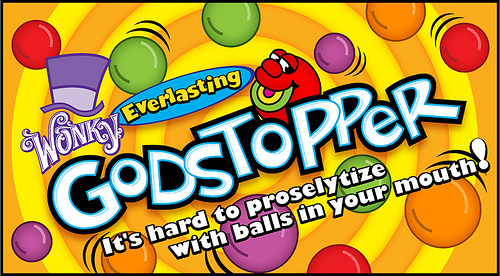 At least they would taste better.

(Thanks to Michel for the link!)

October 4, 2011
An Atheist Group Forms at Presbyterian College
Next Post