That’s One Way to Promote Your Atheist Bus Ads…

But now that a judge ruled in their favor and the ads are set to make an appearance on buses this week (if they’re not up as we speak), it’s good to know that some members of the coalition are taking every opportunity to spread their message… and I do mean *every*.

For example, in a local (just for fun) kickball league, a team consisting of atheists in the Coalition promoted the billboard with their uniforms… 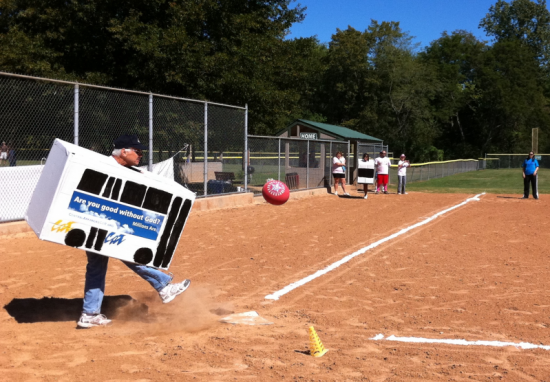 Since atheists are naturally athletic, I suppose those costumes were hardly obstacles at all…

By the way, the group calls itself “The Non-Prophets.” And you have to appreciate their logo:

It might seem silly, but it got the attention of the media:

“How easy or difficult is it to maneuver out there wearing the costume?” asked FOX16’s Kelly Dudzik.

“It’s quite difficult actually. When we’re kicking, we tend to just have our head out, but on the field, I have both my arms through the head hole so I can actually grab the ball and field it,” says [team captain LeeWood] Thomas.

If you watch the clip below, I was laughing out loud at the way Thomas said “It’s quite difficult actually.” Also take note of how he says “Vroom Vroom” as he runs 🙂 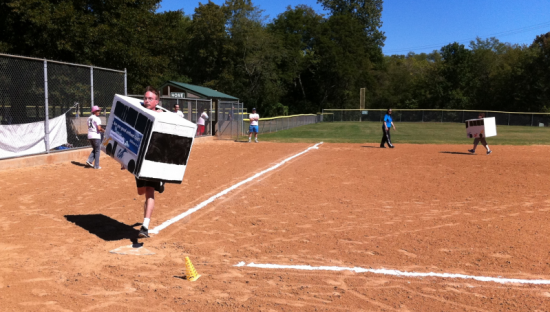 If you have a few seconds and you want to amuse yourself, check out the names of the other teams in the Laidback League (part of the Little Rock Kickball Association). 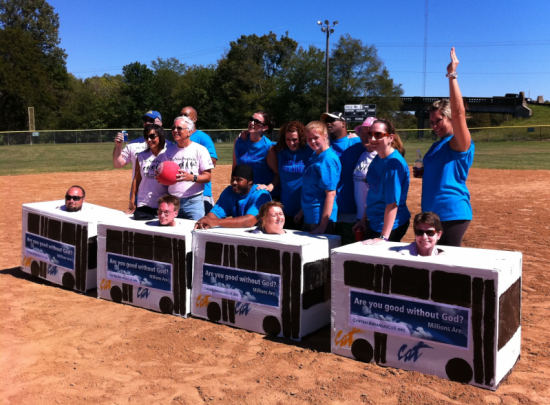 What do you think: Lovable losers or totally-awesome-and-you-want-to-join?

(via Central Arkansas Coalition of Reason)

October 4, 2011
Can Progressive Christians Still Win Over the LGBT Community?
Next Post

October 4, 2011 Supreme Court Won't Hear Illinois Moment of Silence Case
Browse Our Archives
What Are Your Thoughts?leave a comment