How Can We Prevent Modification of Atheist Chalkings on Campus? October 3, 2011 Hemant Mehta

How Can We Prevent Modification of Atheist Chalkings on Campus?

This is a guest post by Kimberly Danner, the co-founder and Vice President of the Atheists @ Oakland University. 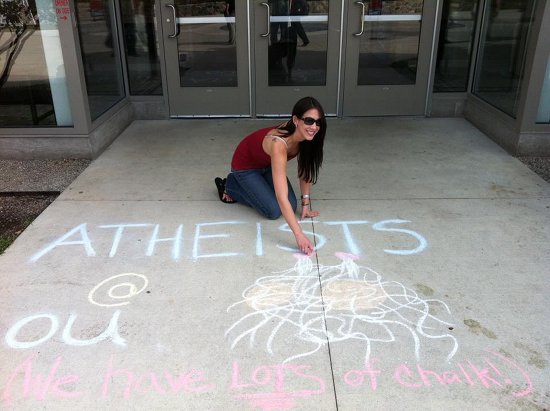 Atheists @ OU is the first secular organization at our conservative school. A fellow student and I (both female) founded the group this past January and we now have 30 regular members at our weekly meetings. Our school awarded us the “Best New Student Organization” of 2011 after only four months in existence.

Our faculty advisor, Dr. Todd Shackelford, has been incredibly supportive of us and was instrumental in getting Richard Dawkins to come to our campus later this month to promote The Magic of Reality. Despite all of our excitement, though, discrimination has been difficult to avoid.

We posted fliers promoting our group all over campus… but they didn’t last very long. Some were ripped down within an hour. One student even told us, “I have been actively seeking out fliers for more information because I saw one and did not see another for months.” As time passed, we only saw the situation get worse. Our new fliers promoting Richard Dawkins were ripped down even faster than the ones for our meetings and those that remained had signs of tampering… including a Hitler mustache. 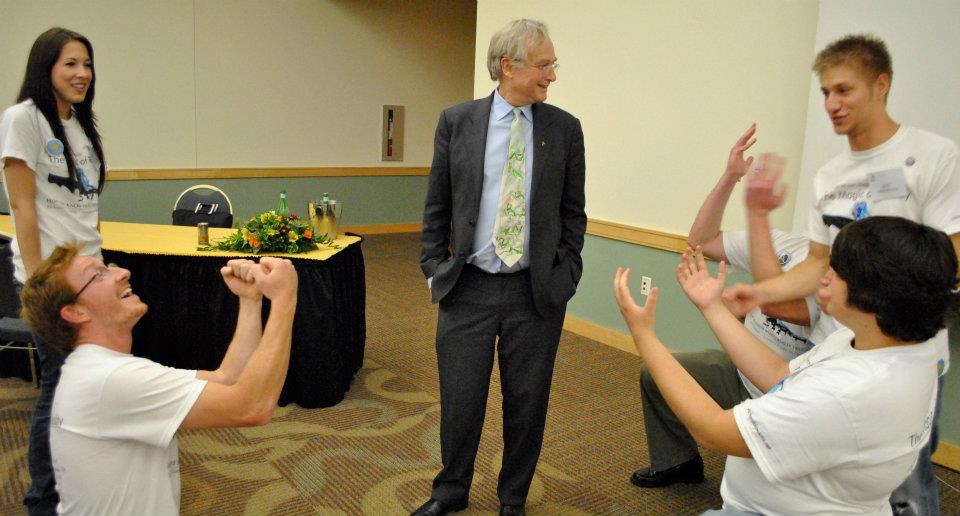 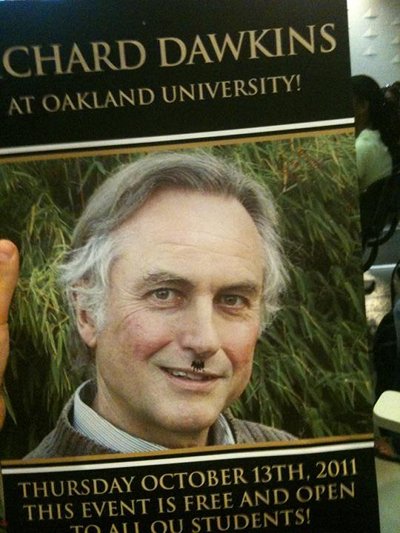 One popular way to draw attention to your group on campus is “chalking” your organization’s name on the ground. Our first design featured the Flying Spaghetti Monster and it was nearly complete… until a group of six men approached us, spitting on our work. When one girl asked him to stop by saying “God wouldn’t want you to do that,” he replied with, “What do you care? You don’t believe in God, anyways!” That’s when they began to put their cigarettes out on the ground, right on the chalking. 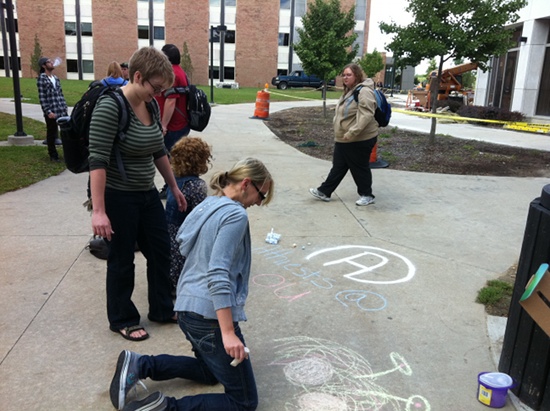 While we understand that the group is public, it was still an attack on our beliefs. They quickly became more intense verbal attacks. They narrowed in on the only male in our chalking group, James Kleiner. One of the guys yelled, “I’m going to knock your fucking heads off!” to the entire group. We decided to walk away before a potentially dangerous incident occurred. (We told the Campus PD. They’re still investigating the situation.) Nearly all of our chalkings were destroyed, spit on, or manipulated by the end of the day. The last one we saw had our group name washed away with a revision statement, “God still loves you John 3:16.” 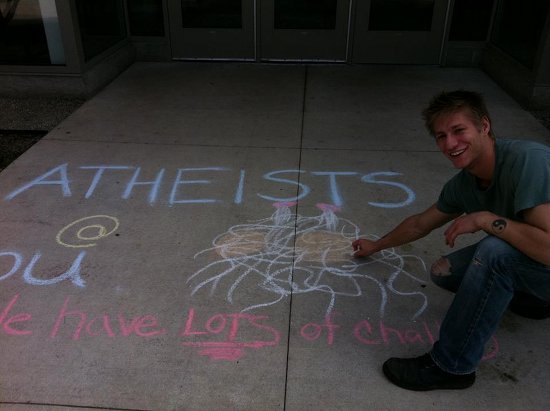 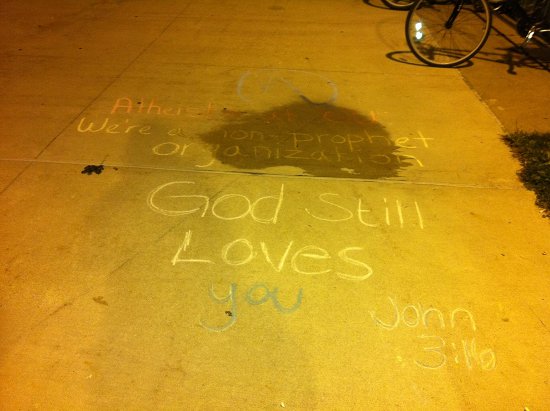 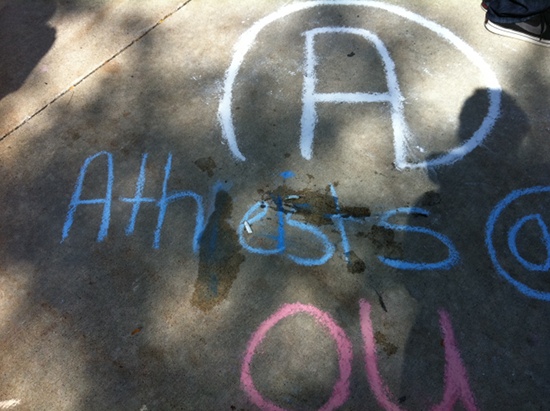 “People can be very dismissive — very quick to shun new ideas that they don’t want to hear and a lot of people can’t conceive that we don’t have a belief in God, so they find it threatening, I suppose,” Kleiner said.

I’m shocked that some people would react this way toward a group just because they don’t believe in the same things as them. Why is this a problem? Lives have been lost for being a freethinker, and you never know how these things will escalate. I don’t think I’ll ever understand why we’re punished and threatened as atheists… are they really that angry at us for accepting scientific evidence? My only conclusion is people may feel threatened simply because they fear the unknown. We find our own meaning in life, and that scares them. We are not devil worshipers, baby killers, or the wretches of society. While some religious texts instruct their believers to kill atheists (even if that doesn’t happen in practice), I’ve never heard of an instruction manual for atheists telling us to kill religious individuals. The backlash is especially surprising when our intent is not to push atheism down peoples’ throats. 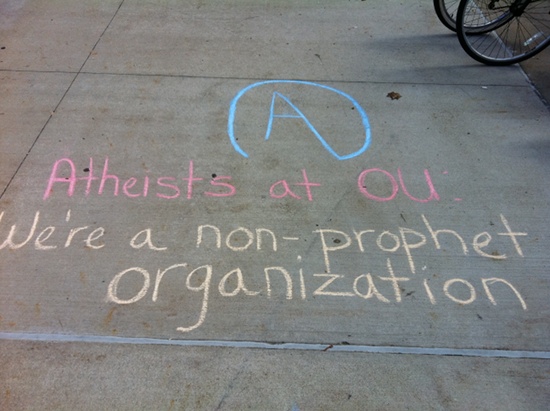 To prevent these situations from happening, we need to make people more aware of what we’re dealing with. We can always provide information to debunk the misconceptions of atheism — promoting a positive image of atheists may open some eyes and help correct stereotypes. 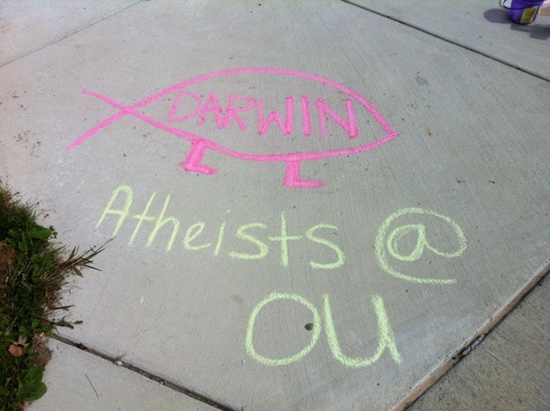 Atheist organizations across the country shouldn’t be expected to simply “deal” with this sort of behavior just because of the nature of our groups. We need help from college officials and campus police. We need help from other students who might witness these actions taking place. Take pictures. Help us identify the culprits. Let the authorities know. Even if you’re not an atheist, realize that we’re your friends, teachers, and even family members. We just happen to be advocates of science and the natural world. We shouldn’t have to fear making our views known on a campus where free inquiry and challenging thoughts ought to be welcome.

October 3, 2011 Another Oregon Couple Found Guilty in Child's Faith-Healing Death
Browse Our Archives
What Are Your Thoughts?leave a comment