Paul Harris at The Guardian (UK) has an article about how the rise of atheism in recent years is putting the ‘religious right on the defensive’… and he got this quotation from Herb Silverman, president of the Secular Coalition for America:

So far just one member of Congress, Californian Democrat Pete Stark, has admitted that he does not believe in God.

“Privately, we know that there are 27 other members of Congress that have no belief in God. But we don’t ‘out’ people,” said Silverman.

I’ve heard a paraphrased version of this statement, but never an exact number… If accurate, it would mean that just over 5% of Congress (535 members altogether) is non-religious. For reference, here’s the religious makeup of the 112th Congress (as of January, 2011, anyway): 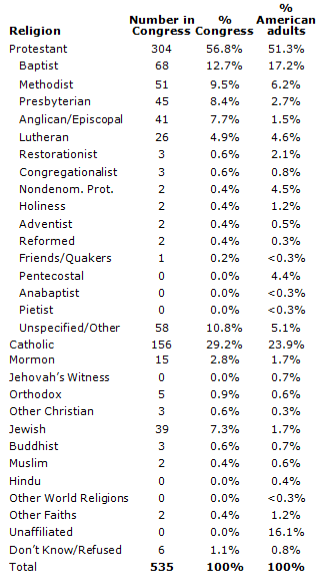 Point of interest: according to the list, there are 0 “unaffiliated” members of Congress. But what about Pete Stark? He’s officially a “Unitarian,” even though he doesn’t believe in a higher power.

The SCA won’t “out” anyone, but that doesn’t mean we can’t make some educated guesses as to who the non-religious might be. Any theories? (Any Republicans?!)

October 1, 2011 I Hope They Serve Tater Tots...
Browse Our Archives
What Are Your Thoughts?leave a comment