Why Are Christians Leaving the Church? Turns Out It’s the Churches’ Fault September 29, 2011 Hemant Mehta

Why Are Christians Leaving the Church? Turns Out It’s the Churches’ Fault

David Kinnaman, the president of the Barna Group (a Christian-focused polling organization), just released his newest book, You Lost Me: Why Young Christians are Leaving Church and Rethinking Faith. 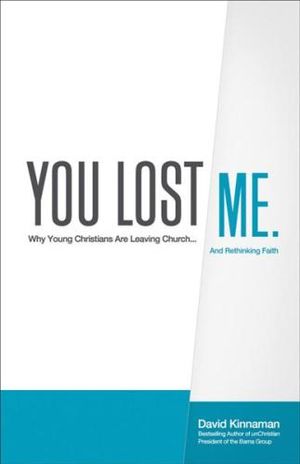 No single reason dominated the break-up between church and young adults. Instead, a variety of reasons emerged. Overall, the research uncovered six significant themes why nearly three out of every five young Christians (59%) disconnect either permanently or for an extended period of time from church life after age 15.

I have no reason to doubt Kinnaman’s findings — and keep in mind these are only the top six reasons, not all the reasons. I’ll admit to being surprised that “I just stopped believing what they preached” and “I was ashamed of the church’s stance on homosexuality” didn’t make the cut.

Even if atheists never wrote another book or blog post, young people will continue to fall away from Christianity. We can always help the process move faster, though, by constantly discussing/debating these issues in our communities, challenging the lies they tell, pointing out their hypocrisy and intolerance at every opportunity, and giving brand new atheists a community to join when they leave their Christian groups.

The Church is doing the bulk of our work for us. But there’s no reason we can’t help them out.

(Thanks to Nancy for the link!)

September 29, 2011
Ask Richard: I’ve Learned My Friend is a Creationist
Next Post

September 29, 2011 University of Georgia Atheists Will Lead Protest Against Pastor Mark Driscoll
"I adore Monty Python but I missed this one somehow. Anyhow, every MP reference is ..."
CorporalKlinger Rick Wiles: Dr. Fauci Must Be ..."
"God air-conditions in mysterious ways ..."
Klapaucius Christian Minister Gives God Credit for ..."
"Uh, yep, only for thousands of years though, since latin, the word opposite trans is ..."
🔄arithrianos🔄 Richard Dawkins is Still Denying the ..."
"How about cis women in place of natural woman, not clumsy aka bigoted at all, ..."
🔄arithrianos🔄 Richard Dawkins is Still Denying the ..."
Browse Our Archives
What Are Your Thoughts?leave a comment