Registered college organizations have to adhere to a few rules, one of which is that they must not be discriminatory. You can’t reject homosexuals or black people or Republicans or atheists from your organization because you don’t agree with their views.

Vanderbilt University in Nashville, Tennessee audited the constitutions of around 300 campus groups and found that 12 of them were violating that rule. Five of those were religious groups. Four of those were Christian groups. (Surprise…) 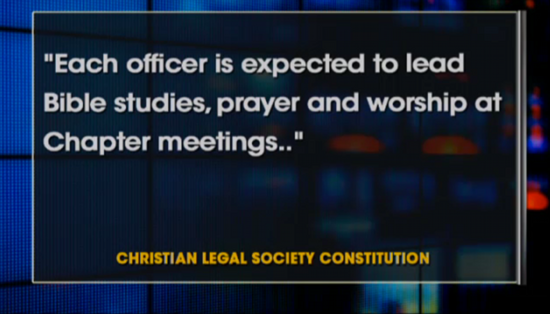 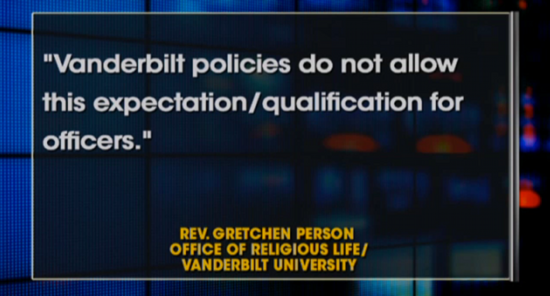 “Each officer is expected to lead Bible studies, prayer and worship at chapter meetings.” [Christian Legal Society] President Justin Gunter told me, “We come together to do things that Christians do together. Pray, and have Bible studies.”

To that, Rev. Gretchen Person — interim director of the Office of Religious Life at Vanderbilt — responded “Vanderbilt policies do not allow this expectation/qualification for officers.” Gunter has been negotiating with the university and has taken some language out of the CLS constitution — including the requirement that Student Coordinators “should strive to exemplify Christ-like qualities.” But he says he has to draw the line at the requirement regarding Bible studies, prayer and worship.

He told me, “At the point where they’re saying we can’t have Bible studies and prayer meetings as part of our constitution -– if we go beyond that -– we’re compromising the very identity of who we are as Christians and the very thing we believe as religious individuals.”

You can kind of understand where he’s coming from, but why would anyone want to belong to a group like that unless they wanted to do those things anyway? Surely, the Christian group can get by without excluding other people, assuming that only Christians would want to be involved with their group.

But that’s where the conspiracy theories begin:

You might be asking yourself, even if they allowed a person who didn’t share their beliefs to run for a leadership position, how would he or she ever get elected? That’s an argument the Catholic student group at Vanderbilt agreed with. Vandy Catholic changed its constitution to read that potential board members need only be “undergraduate students at Vanderbilt University.”

CLS says it could never agree to that. The Vanderbilt group –- and the national CLS organization are worried about “infiltration”, arguing that a person hostile to the group could rise to a leadership position, then attempt to tear it apart through conflict.

So they honestly believe if they make their constitution non-discriminatory, enough atheists would join that we could overtake their membership, elect our own people into leadership positions, and… and then what? It’s not like Christianity’s going to come to an end if the CLS is taken over.

For what it’s worth, atheist groups shouldn’t limit membership to only atheists, either. In fact, most of the groups I know welcome people who believe in god — conversations and debates are waaaaaay more interesting when they include someone who might actually disagree with the group.

I’m pretty sure the atheists wouldn’t do that, in any case. As long as our groups are able to hold their own meetings and co-exist with the other groups on campus, I doubt you’ll see any of us wasting energy on taking away someone else’s right to meet and practice their faith in peace. That would go against what so many of us believe.

If you attend the school, by the way, check out the Vanderbilt University Secular Student Alliance!

(Thanks to Kevin for the link!)

September 27, 2011
Why Did This Canadian Public School Recite the Lord's Prayer Every Morning?
Next Post