Read this message from the ACLU and try not to get furious:

Recently, a South Carolina middle school held a worship rally that sought to convert students to Christianity. The worship rally took place during an in-school assembly and featured a Christian rapper, a sermon delivered by a local minister, and volunteers who prayed with students, urging the students to accept Jesus Christ. The school district may be planning to hold similar rallies at other schools.

More specifically, New Heights Middle School in Jefferson, South Carolina invited Christian rapper B-SHOC (a.k.a. Bryan Edmonds) to speak at an assembly on September 1st. Here’s how that went down (the relevant part begins at the 3:04 mark):

He actually posted that video and then quickly removed it when he realized how much trouble it was going to cause. The video above is the FFRF’s copy of it. I love the Internet… 🙂

Normally, when schools officials who want to proselytize to children invite Christian groups to perform at assemblies, the groups talk about ethics, or staying off of drugs, etc… then they invite children to the local church later that night so they can really proselytize.

This school doesn’t even bother to have a cover.

The Freedom From Religion Foundation can’t believe how bad this case is:

The foundation’s attorney, Rebecca Markert, termed the event “the most egregious” she’s seen in her three years with the non-profit group she said was founded in 1976 to protect the constitutional separation of church and state. Markert said her organization has dealt with dozens of events, mainly in the South, where churches or religious groups seek to enter schools to hold assemblies and talk about a secular issue, such as bullying, alcohol use or drug addiction.

“They speak about that issue, then they invite the kids to an evening pizza event at their local church,” she said. “But this is the most blatant event I have seen, an assembly held during the school day.”

Even worse is when B-SHOC reveals that the school’s principal was guilty of breaking the law at the 3:58 mark:

And so your principal looked at me and I said, “How are you getting away with this?” And he said, “I’m not.” He said, “I’m tired of being a hypocrite. I’m tired of playing the game.” And he said, “I want these kids to know that eternal life is real and I don’t care what happens to me, they gonna hear it today.” And then I got so pumped up! It was that Braveheart moment, like “Just do something, dude, and I will follow you!”

And listen, whether you agree with it or disagree with it, I was preaching today and I saw one of the teachers looking at me and shaking her head like, “no. No, no, no.” And I never get mad because they speak about evolution. I tell people all the time, if you teach evolution five days a week, nine months out of the year, then let me have 30 minutes to tell them that Jesus loves them. And I will win because the message of Christ is much deeper, better, stronger and more powerful.

Umm… even in the best of public schools, no one teaches evolution every day. Even if they did, it’s no excuse to push a misguided faith onto gullible young minds. They deserve to be educated, not indoctrinated.

FFRF has already sent the district a letter of complaint (PDF) outlining this Establishment Clause violation. It’s not the only one, either. On the tenth anniversary of the 9/11 attacks, the same school put crosses on the front lawn to symbolize the victims (who, apparently, were all Christian in their fantasy world). 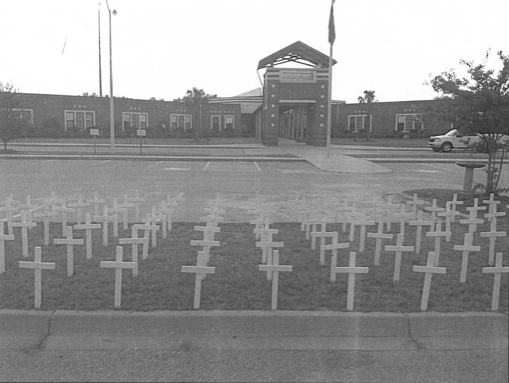 Furthermore, the school promoted a Christian “See You at the Pole” event on the school’s website as if it were sponsored by the school itself and not, say, a Christian club.

It’s pretty clear that administrators at this school are more interested in treating the building as a church instead of a public school and they deserve to be punished for it. My lawsuit teeth are salivating.

The district has not responded back yet… but I can’t wait to hear their excuses. Or maybe their apologies.