Churchgoing Christians in Alabama Are Literally Getting a ‘Get Out of Jail Free’ Card September 24, 2011 Hemant Mehta

If you’re a non-violent criminal in Bay Minette, Alabama, you now have an option for how you’d like to handle your punishment: Stay behind bars… or attend the church of your choice.

Operation Restore Our Community or “ROC”…begins next week. The city judge will either let [misdemeanor] offenders work off their sentences in jail and pay a fine or go to church every Sunday for a year.

If offenders elect church, they’re allowed to pick the place of worship, but must check in weekly with the pastor and the police department. If the one-year church attendance program is completed successfully, the offender’s case will be dismissed.

[Bay Minette Police Chief Mike] Rowland says the program is legal and doesn’t violate separation of church and state issues because it allows the offender to choose church or jail…and the church of their choice.

I know what you’re thinking: “Sign me up for jail!”

I’m just kidding. You’d never have to make that choice because atheists rarely go to jail.

Wait! I have another one!

I know what you’re thinking: “I’ll go to church!” [Two weeks later…] “SEND ME BACK TO PRISON!”

Wait! I have another one!

How long would a service have to be in order for it to “count”? What if the criminals don’t show up for the worship music? What if they arrive late (like plenty of other Christians)? What if they openly disagree with what the pastors say? What’s stopping them from committing another non-violent act since the punishment is simply “give up an hour of your Sunday”? What if I’m a non-violent criminal and an ordained minister online — can I just start my own church?

None of those questions have been answered.

And just to flip the equation, I wonder how churchgoers in Bay Minette feel right now… their weekly ritual is now someone else’s voluntary punishment? That’s gotta make them feel like crap…

But, come to think of it, what if a church-going Christian commits the crime? This policy would not only mean that the crime would essentially be “off the books” after a year, but also that the criminal would get away without any real penalty. It’s not a punishment if you have to keep doing something you already do! To those suggesting that couldn’t happen, yes, it could. Just check out the image below from the Freedom From Religion Foundation’s “Black Collar Crime Blotter” in Freethought Today for proof. (Click to enlarge) 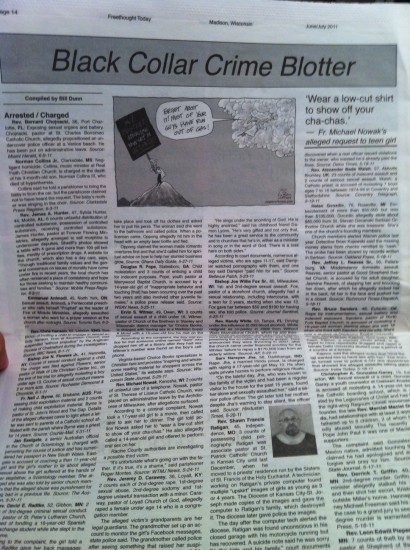 The only people this policy would hurt are those criminals who choose not to be religious… or who refuse to lie about their religious beliefs in order to serve a lighter sentence.

While more than 50 churches have signed up to participate in this program, no word yet on whether mosques, synagogues, or [insert wherever a local Humanist group meets] are included on the list.

But Christian pastors are excited:

Pastor Robert Gates of Christian Life Church leads one of 56 congregations participating in the effort. He predicted it would succeed.

“You show me somebody who falls in love with Jesus, and I’ll show you a person who won’t be a problem to society but that will be an influence and a help to those around them,” he told the television station.

If the goal is to save the city money — which Police Chief Mike Rowland has argued — then I can suggest a number of ways for the criminals to serve their time while actually helping the community (instead of sitting in a pew, doing nothing):

All of those would have to be supervised, of course, but I would much prefer any of those options for non-violent criminals over having them listen to a pastor preach lies and bigotry on a Sunday morning.

The ACLU of Alabama can’t believe this is happening:

“While we certainly support alternatives to putting people in prison, Operation Restore Our Community flagrantly violates the Constitution and we intend to send a letter to Bay Minette officials demanding that this illegal program be suspended immediately. In the face of mounting budget deficits, states and local jurisdictions are right to embrace cost-effective alternatives to incarceration that hold people accountable while better addressing the root causes of crime.

But it is a fundamental principle of the Establishment Clause that the government cannot force someone to attend church. When the alternative to going to church is going to jail, the so-called “choice” available to offenders is no choice at all.” — Olivia Turner, Executive Director of ACLU of Alabama

And, as usual, FFRF is already on the case (PDF):

This is government endorsement of religion and it needs to come to a stop quickly. Then again, it’s Alabama… this is the state where former state Supreme Court Chief Justice Roy Moore put up an illegal Ten Commandments monument because he believed his religious beliefs were more important than the law. So keep complaining and maybe someone in Bay Minette will hear you. 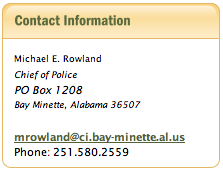 If you do contact him, don’t be a dick. And let us know what you wrote in the comments.

***Update***: It seems something similar is happening in Idaho.

September 23, 2011
How Can Atheist Groups Flourish in the South?
Next Post