The Pledge of Allegiance Petition

There’s a petition making the rounds on the White House website to remove “Under God” from the Pledge of Allegiance. It’s getting a lot of support… which, as you know, means absolutely nothing. The Pledge won’t change anytime soon. (If it ever does change back to it original form, you can bet it’ll be via the judicial system, not Congress or the President.)

But there’s no reason you can’t lend your symbolic support: 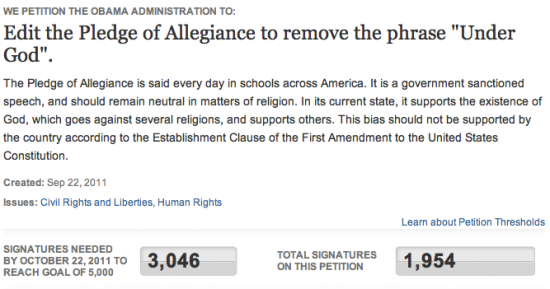 Odds are this won’t get an “official” response, and it’s pathetic that we need to petition our government to remove a phrase that never should have been in the Pledge in the first place, but maybe we can get this issue on somebody’s radar. There’s more discussion about this petition on Reddit.

***Edit***: Apparently, there’s also an active petition to get “In God We Trust” off the currency.

(Thanks to Sinfanti for the link)