The Secular Student Alliance at Southern Illinois University Carbondale is now an official student organization… but that almost didn’t happen.

The Undergraduate Student Government voted against their existence earlier this week: 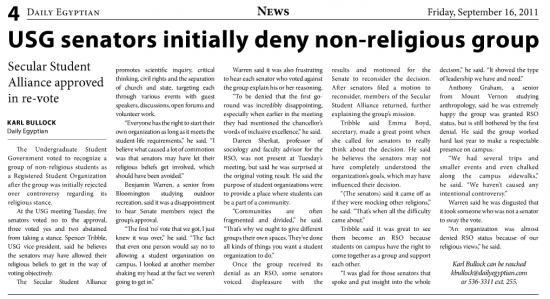 At the USG meeting Tuesday, five senators voted no to the approval, three voted yes and two abstained from taking a stance. Spencer Tribble, USG vice-president, said he believes the senators may have allowed their religious beliefs to get in the way of voting objectively.

Benjamin Warren, a senior from Bloomington studying outdoor recreation, said it was a disappointment to hear Senate members reject the group’s approval.

“The first ‘no’ vote that we got, I just knew it was over,” he said. “The fact that even one person would say no to allowing a student organization on campus, I looked at another member shaking my head at the fact we weren’t going to get in.”

So what were the reasons against allowing the atheist group to get the same access to rooms and funding and table space at organization fairs as every other student group on campus?

“(The senators) said it came off as if they were mocking other religions,” [Tribble] said. “That’s when all the difficulty came about.”

So discussing and criticizing religion, doing community service as non-theists, bringing in speakers who might challenge students’ ways of thinking, and creating meaningful dialogue with other faith groups on campus = Mockery.

According to the SIU group’s Facebook page, the senators also believed the atheists would cause “controversy on campus” (as if that could only be a bad thing).

All this, after the senators apparently spoke about their “inclusive excellence.”

Thankfully, a couple of the senators “voiced displeasure with the results” and got the body to reconsider the decision. The SSA members returned to make their case and some senators (I’m not sure how many) changed their minds.

Fortunately, they came to the right decision — but it’s too bad it had to come after an irresponsible wrong one.

Still, kudos to the SSA members for speaking up at the USG meeting and for smartly going straight to the Daily Egyptian campus paper with this story. If people don’t know what happened, they can’t do anything to prevent it from happening again.

(Thanks to David for the link!)

September 16, 2011
I Would Make a Horrible Christian Man
Next Post