Young Atheists Are Uniting with the Help of Tolerant Teachers September 15, 2011 Hemant Mehta

Young Atheists Are Uniting with the Help of Tolerant Teachers

The Southern Poverty Law Center puts out a magazine called Teaching Tolerance a couple times a year. It’s aimed at educators, letting them know how they can be inclusive and accepting of all kinds of minorities.

The Fall, 2011 issue has a wonderful article by Victoria Lim called “The Unaffiliated Unite” — it’s about the plight of secular students like Damon Fowler and Brian Lisco and many other high schoolers who had (and still have) a hell of a time getting accepted for their beliefs. 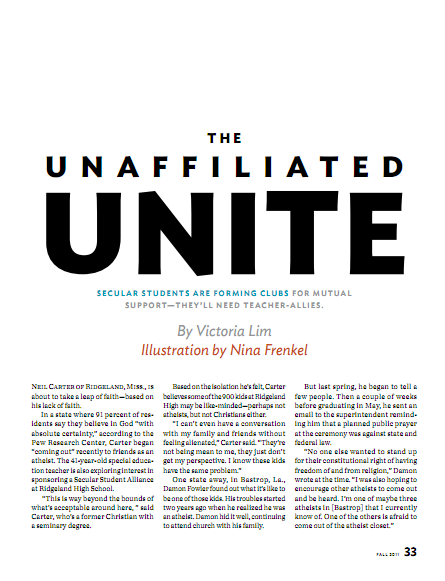 There’s also a nod to the teachers who function as faculty sponsors for Secular Student Alliance groups:

Teachers wanting to take the first step towards forming a secular student club must lead by example. It’s what [Rutherford High School AP English teacher Mike] Creamer said he’s found to be most effective in providing those kinds of lessons outside the traditional classroom setting by forming the SSA.

“You’ve got to be able to stand up at the faculty meeting and say, ‘Hey listen, my Secular Student Alliance did this’ knowing 95 percent of people in that room don’t want to hear about it,” Creamer said. “If you’re not willing to do that, I don’t think it’s going to go.”

Creamer said many people believe the SSA’s main function is to “bash God.” That’s not true, and that’s also not the purpose of a local SSA. He said club members participate in activities — like a recent Frisbee tournament to raise money for a local homeless shelter — and spend time discussing rationalism, skepticism, politics and legislation.

One of the ways this problem of exclusion gets solved is by young students coming out as atheists and accepting adults giving them a place to gather (as well as providing them with leadership). This article highlights just a few examples of many. If you prefer reading a PDF copy of it, here you go (it begins on page 33).

At the end of last school year, the SSA had 25 high school affiliates. I’m expecting that number to jump tremendously by the end of this year. If you’re interested in starting a group, just head here.