Bradley Johnson is a math teacher at Westview High School in the (public) Poway Unified School District in California. He’s been working in the district for decades.

You know he’s a math teacher because he’s had these posters hanging in his classroom for decades now: 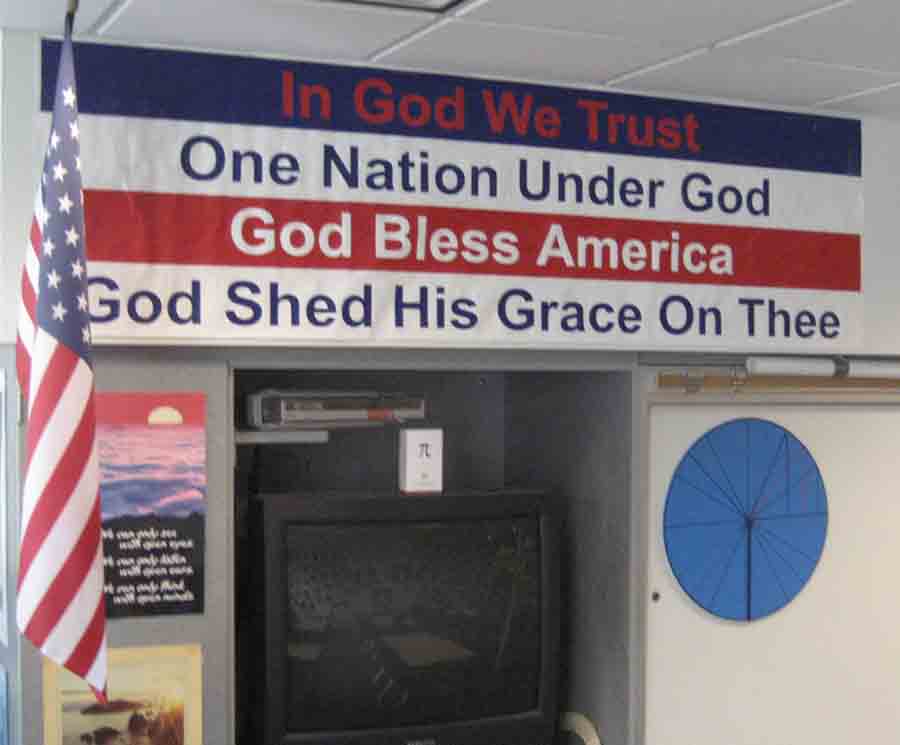 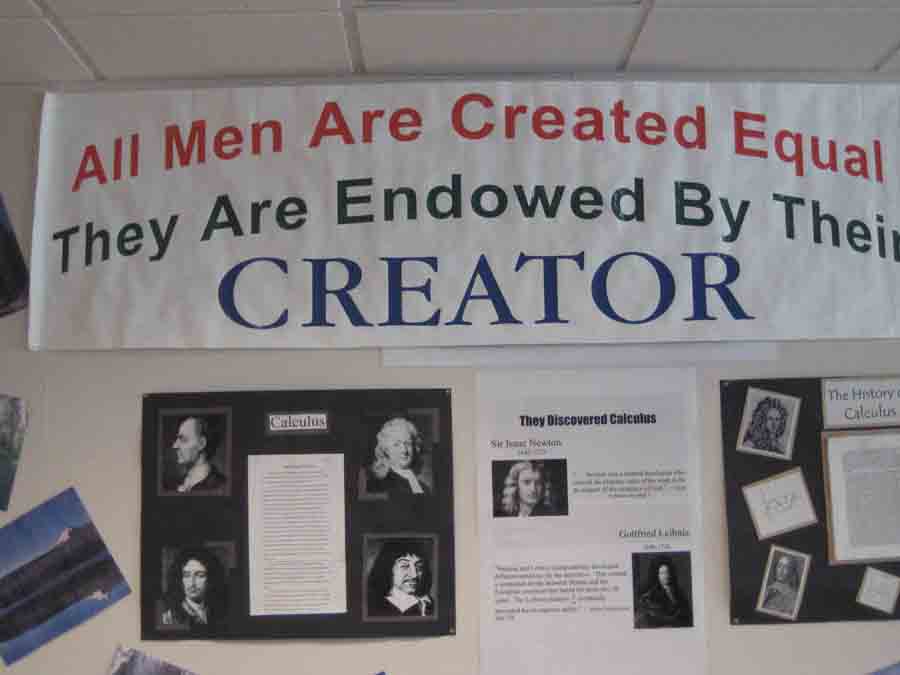 In God We Trust
One Nation Under God
God Bless America
God Sheds His Grace On Thee.

All Men Are Created Equal, They Are Endowed By Their CREATOR

They remained in his room for 25 years and 17 years, respectively, without a complaint. But after he moved to a different school (in the district) in 2007, Principal Dawn Kastner correctly told him to take those posters down.

Back in March, 2010, Judge Roger Benitez ruled that Johnson *could* keep the posters in his classroom. It was a shock to me, because I know I could never get away with promoting my beliefs about god in the classroom — and that’s the way it should be.

On Tuesday, though, the U.S. 9th Circuit Court of Appeals, finally overturned that horrendous ruling. (Our friends at Americans United wrote an amicus brief (PDF) siding with the school district in which they essentially said “he’s a government employee [when he’s in the classroom] and he’s not entitled to push a religious agenda.”)

Judge Richard C. Tallman is very blunt in the decision, too (PDF):

We consider whether a public school district infringes the First Amendment liberties of one of its teachers when it orders him not to use his public position as a pulpit from which to preach his own views on the role of God in our Nation’s history to the captive students in his mathematics classroom. The answer is clear: it does not.

Just as the Constitution would not protect Johnson were he to decide that he no longer wished to teach math at all, preferring to discuss Shakespeare rather than Newton, it does not permit him to speak as freely at work in his role as a teacher about his views on God, our Nation’s history, or God’s role in our Nation’s history as he might on a sidewalk, in a park, at his dinner table, or in countless other locations.

In essence, when you’re at school, teach the kids math. When you’re not supposed to be teaching, do whatever the hell you want. It’s really not that difficult.

The most shocking part of the ruling — something that’s gone basically unreported — is how Principal Kastner politely tried to explain to Johnson why the banners needed to come down before all the lawsuits began:

Kastner asked Johnson to consider how a student of a different faith might feel if they walked into his classroom and saw his banners. “[T]hey may feel like, ‘Wow, I’m not welcome,’ or ‘I’m not gonna fit in this classroom.’ And they may feel bad. And I can’t imagine that that would ever be your intent.” Johnson was not convinced. According to Kastner, he told her, “Dawn, sometimes that’s necessary,” and refused to either remove his banners or display the more contextual versions the school offered to provide. He explained that he had displayed the banners in some form or another since 1982, that they simply contained patriotic phrases, and that he considered it his “right to have them up.”

Wow… this guy’s a jerk. Even homophobe Jerry Buell said he respected all of his students despite his Christianity.

This should’ve happen a long time ago. It probably would have, too, if anyone else felt comfortable going up against him. It took another teacher at the new school to finally complain about the banners… decades after they originally went up.

At least the court got it right. And now Johnson and the (Christian) Thomas More Law Center are stuck paying the legal bill for the school district, an appropriate punishment given how they wasted everybody’s time.

September 14, 2011
Tim Minchin's Coming Back to Chicago
Next Post