The Person Who Sent in the Falling Man Image to PostSecret Explains Why He Did It September 14, 2011 Hemant Mehta

The other day, I posted this image from PostSecret: 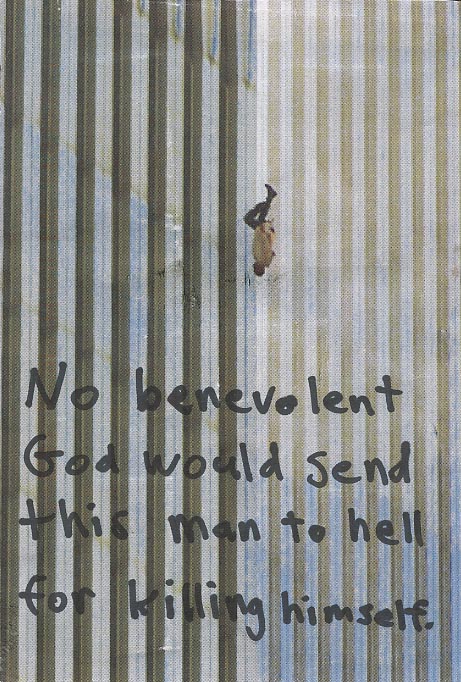 Well, it’s no longer a secret who sent in that image. It was Michael Convente, a graduate student and someone who’s not religious at all. (He emailed me proof that he really was the sender). At the Daily Kos, Michael explains his rationale behind sending in the secret:

I have heard before from certain groups of Christians who consider suicide a sin that results in that person’s soul being sent to hell. The argument behind this belief is as follows — because the afterlife with God is divine and eternally restful, there must be a barrier in place to prevent people from ending their lives prematurely to rush their ascent toward heaven. An additional argument is that because “thou shall not kill” is one of the Ten Commandments, a person who commits suicide is committing a sin and cannot repent because he or she is dead.

Though, as many of the commenters pointed out on Reddit.com and the PostSecret Community, anyone who fell from the Twin Towers on 9/11 did not enter the building knowing they were going to jump. They were forced not into a choice of not whether they would die, but how they would. They took that decision into their own hands. Therefore, medical examiners ruled those who jumped as homicides attributed to the terrorists.

My words are a criticism of religious (and particularly, Christian) absolutism. Even though many claim the Falling Man had no true choice, he did indeed. Choice for one of several methods of death, while extremely distressing and saddening, is choice nonetheless. And the choice of the Falling Man, when interpreted through the lense of a Christian absolutist, is that of suicide. And in that same lense, that of a one way ticket to hell.

It’s mind-boggling that that anyone would consider the Falling Man’s decision to jump as a “wrong choice” or even a choice at all.

Amanda Marcotte can’t believe it, either:

When I first read about how the choice to jump instead of stay in the WTC to burn to death became stigmatized, I didn’t understand it at all. Why were people judging one choice over another in a choice-free situation? Then I realized the role that religious teachings about “suicide” played in the discourse, and, well, I’m too full of disgust to even respond with much beyond “fuck that noise”.

You want to know why this image is so relevant? Because religious people have to grapple with the notion that their God may have sent this person to hell.

Or, perhaps, that suicide isn’t always a pathway to hell, contrary to what many Christians leaders would have them believe.

Or, to paraphrase a commenter at Pandagon, if this is the sort of action that a “benevolent” God would allow, there’s no reason to put your faith in him.

September 14, 2011
According to This Christian Group, a Woman's Dominion Is...
Next Post