It’s the beginning of the school year and a lot of campus atheist groups are chalking the sidewalks and sitting behind tables at organization fairs to sign up new members.

The Alabama Atheists and Agnostics have been around for two years and they’ve actually had a good run at the school considering how conservative the state is.

Gordon Maples, an officer of the group, said everything seemed to be going well during the first tabling of the year:

The table started off excellently: lots of civil discussion and casual debate with students and religious peoples who had become accustomed to our presence, and had genuinely interesting things to ask and sincere questions for the tabling crew. Better yet, we saw even more new members join the fray: for the first time, there were more new members coming to the table than questions (and not necessarily for a lack of questions).

Familiar faces from religious student groups even stopped by: not to challenge us or convert us, but just to say “hi”. We may not agree on theological issues, but we are all part of the greater community of campus. There’s no reason not to be civil, if you ask me.

But then they started writing chalk messages on the campus, letting students know about the group, and that’s when the trouble began…

Like the message that read “Millions of Americans are good without God”… which turned into this less than an hour after it was drawn:

I know, I know, it’s just water. It could’ve been worse. But the point is that someone thought that message was offensive.

When the atheists wrote the message again somewhere else, they came back less than an hour later to find the “-out” part of the word “without” scuffed out. So even if you think the water might have been an accident, this one was definitely deliberate.

I’ll give Gordon’s group a lot of credit, though. They didn’t stop chalking. In fact, they put up larger messages that are hard to ignore and very difficult for anyone to erase without a lot of effort.

Gordon wrote about the people who are trying to get in the way of the group’s message:

… Even one new active member is worth a box of wasted chalk. We ARE making progress. I know it because I see it every day. These instances are disheartening, but not surprising. We just have to redouble our efforts against intolerance and bigotry. All i have to do is remind myself of my peers on the front lines elsewhere: Hattiesburg, fighting for their ratification; Athens, challenging their SGA’s religious bias; Auburn, paving the way into our state’s high schools…

It gets better. It is getting better. Three years ago, even we didn’t exist. Now, we’re paragons on the front lines. Only four semesters turned a small group into a powerful force.

We are just like that surviving chalk: this will NOT put us down, and we are NOT going to be silenced. There may be a long road ahead, but we’re stocked for the duration.

If you’re at the University of Alabama and interested in going to a meeting, the Alabama Atheists and Agnostics Facebook page is right here. Check them out! 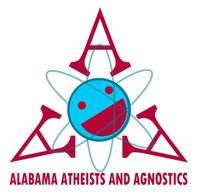 September 8, 2011
We Created God In Our Image, Not the Other Way Around
Next Post