The New Atheists, Ponies, and Alcohol

As Kelley Freeman showed us last month, the best way to make the Four Horsemen — Sam Harris, Richard Dawkins, Christopher Hitchens, and Daniel Dennett — appealing to women is to turn them into ponies.* 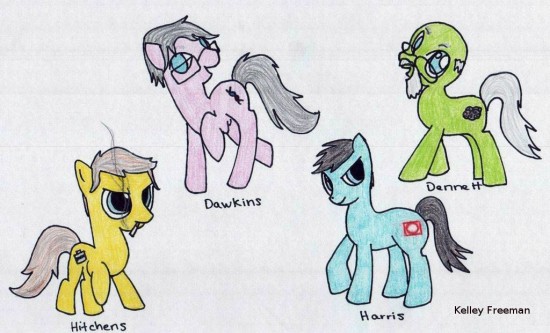 Now, Kelley (of the Pastafarians at USC) and Katie Hartman (of the Missouri State branch of the Church of the Flying Spaghetti Monster) have teamed up to turn those ponies into something everyone can appreciate: Shot glasses! And they feature the lovable Four Horseponies!

Anyway, Kelley and Katie are selling the shotglasses for $19.99 a set — with all proceeds being split equally between their two groups. Even if you don’t drink, the money’s going to two fantastic student groups — and they’ll make a great gift! So get a set for that special atheist lady in your life* 🙂

September 9, 2011
An Atheist Donates to a Catholic Group Because They Have the Infrastructure in Place to Help Others
Next Post

September 9, 2011 Humorous Australian Show Gets Ad Agencies to Promote Banning of Religion
Browse Our Archives
What Are Your Thoughts?leave a comment