Why Are They Rejecting Atheist Generosity? September 8, 2011 Hemant Mehta

Why Are They Rejecting Atheist Generosity?

***Update***: The American Cancer Society has responded to this post.

This isn’t necessarily a story of discrimination against atheists. But I find it hard to believe a church group would have been treated the same way… hear me out and let me know if you feel the same way.

To preface the story, I’m reminded of Kiva, the microlending website. On that site, individuals can loan out a relatively small amount of money, say $25, to a person who really needs it. By gathering a couple hundred dollars or so via small loans, many people around the world can get the capital they need to get their “businesses” off the ground. It might even help them get out of poverty. (Ideally, they pay back the loan, allowing you to reloan the money to somebody else.)

That’s a powerful project. But one way Kiva encourages even more people to loan money is by allowing them to be part of a larger group. Like the group called “Atheists, Agnostics, Skeptics, Freethinkers, Secular Humanists and the Non-Religious.” As I write this, the 17,000+ members of that group have loaned out more money than any other group out there — nearly $5,000,000. (The Kiva Christians are in second place by a mile.)

Now back to the current story.

A couple months ago, philanthropist Todd Stiefel came to the Foundation Beyond Belief board (which I’m on) with an excellent idea.

Every year, the American Cancer Society sponsors an international event called Relay For Life. While details vary from location to location, the Relay is basically an event in which teams walk for 12 or 24 hours straight (or take turns doing it, hence “relay”). I’ve participated in Relay For Life three times, as a student and as a teacher (all the events took place at the high school I was at). Someone in my group would bring a tent and we would “camp” overnight around the school’s football field while my friends and I took turns walking around the track. It’s an incredible event, inspirational and fun for everyone. More importantly, all the donations go to a worthy cause.

As it turns out, your local group can also be part of a National Team… which is perfect if you’d like to help the cause with a huge group of people who don’t live in the same area.

So, Todd said, wouldn’t it be amazing if we could get atheists around the world to participate in their local Relays — but under the umbrella of the Foundation Beyond Belief?

What a brilliant idea. Can you imagine the headlines if a group of atheists, worldwide, raised more money for cancer research than any other National Team?!

To sweeten the deal, Todd made another proposal: His family would contribute up to $250,000 in matching funds! So, whatever amount your local group raised (under the FBB National Team banner), Todd would double that donation up to a quarter-million dollars.

(Obviously, running this endeavor requires a lot of time and effort. So Todd also pledged an additional amount of money to FBB for operational support so one of our interns could manage this whole shindig.)

What would we need to make this happen? Simple. The American Cancer Society would just have to list “Foundation Beyond Belief” as one of their National Teams so that local groups could go to the drop-down menu and sign up “under” that FBB banner. 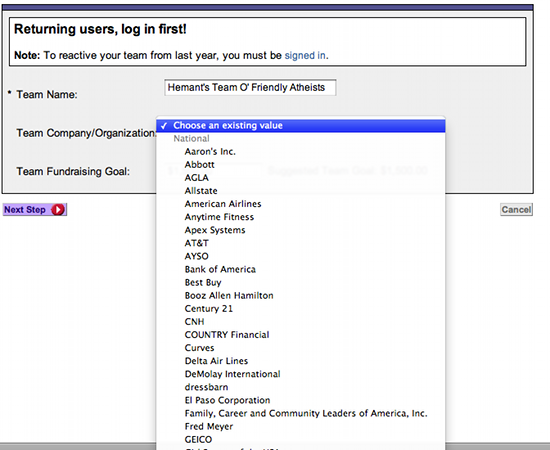 Normally, for a National Team to be listed in the menu, you must have had 50 local groups participate the previous year. We didn’t have that. But Todd was basically going to help raise $500,000 for the ACS — why on earth would they refuse to list us?

You can see where this is going…

So, back in July, Todd got in touch with one of the people who runs Relay For Life — I’m going to call him “Bob” — and explained what he wanted to do. Bob said this shouldn’t be a problem — not only could we have the team, the ACS would take care of everything on their end while Todd went out of town for a couple weeks. When Todd returned, though, he hadn’t heard back from Bob. Todd sent an email asking Bob how things were proceeding. Another two weeks passed without a response. No phone call. No email. Nothing. Todd called them again and left a message expressing his concerns about their lack of responsiveness, asking if we should look to partner elsewhere. Two more weeks passed without response.

Think about that for a second. You work for a non-profit organization and a donor calls to say they essentially want to hand you half a million dollars. What do you do? You get back to that person as-soon-as-goddamn-possible. But the ACS didn’t respond for over a month…

Keep in mind, by the way, that Todd’s local group, the Triangle Freethought Society, raised over $23,000 during Relay For Life last year, more money than any other local group. This was someone who believed in what Relay For Life was doing and wanted to further the American Cancer Society’s cause. It’s a non-profit’s dream come true.

Finally, Todd heard back from someone. But it wasn’t from the national office. It was from a local Relay For Life leader in Raleigh, North Carolina, who got in touch with Todd, only coincidentally while all this stuff was going down, simply to meet him in person and thank him for his team’s efforts last year. Todd arranged to meet with her — and also mentioned how he was having some difficulties getting through to the ACS. He told her what had happened since he first contacted Bob. The lady was appalled and told Todd she’d get to the bottom of this.

Finally, after all this time, Bob sent an email to Todd. Todd asked why he hadn’t heard from him and inquired whether or not he should take his money elsewhere.

Bob explained the situation like this: The Relay for Life website was in the process of getting a major update, and some things with the organization were changing. For example — surprise! — they’re no longer allowing National Teams that are “non-corporate”… because of limited resources, the ACS decided to stop putting effort into non-corporate teams. So they had to decline the Foundation Beyond Belief group. Bob added that FBB teams were welcome to participate in events locally, but they would not be treated as a unified group.

Wait, says Todd. Let me get this straight. You don’t have enough resources to allocate to non-corporate groups… even when it might bring in $500,000?! You don’t need additional staff. You don’t need a new website. You just need to write one line of code in the drop-down menu!

(I’ll take a moment here, as someone who has worked with non-profit groups, to say that if a staffer ignored an offer of $500,000 from a donor because it involved 20 seconds of writing some code, that person would be fired on the spot.)

It seemed like all hope was lost. But Todd got in touch with Bob one more time because he had a few questions.

Their conversation happened earlier this week

Based on what I know of the story, here’s my imagined, scripted version of how the conversation went.

Todd: You said we couldn’t have a non-corporate National Team?

Todd: Well, since Foundation Beyond Belief is a 501(c)(3) corporation, can we be part of the Corporate Team program?

Bob: You don’t meet the criteria.

Bob: You’re not a business.

Todd: So? How does it hurt you to have a non-business corporate National Team?

Bob: Umm… It’s our decision. We’re only going to have corporate partners.

Todd: Ok, well, what about the Matching Challenge?

Bob: If you want to give us money, that’d be fine.

Bob: Yes. But we won’t be able to help you track the money your local teams collect.

Todd: … even though you track the money for all the local groups anyway?

Todd: Well, can we start a National Youth Partner team for the Secular Student Alliance or CFI – On Campus? Between them, they have hundreds of chapters.

Bob: We’re not set up that way. In fact, we’re going to be de-emphasizing our National Youth Partners program when we revamp our website. Right….. NOW!

Todd: But I’m looking at the drop-down menu on your revamped website. Sigma Alpha Lambda is one of your National Youth Partners and you list them under the banner of National Teams: 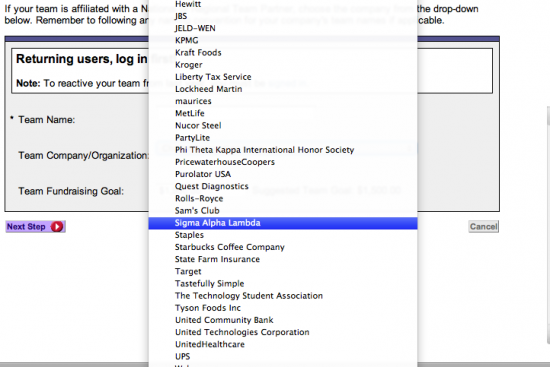 Bob: Umm… we haven’t updated that part of the site yet.

Todd: Didn’t you just update everything on your site last week?

To summarize everything, Todd and Foundation Beyond Belief are able to run local teams and we can still do the Matching Challenge, but the American Cancer Society won’t recognize us nationally.

Todd did ask very bluntly if this was a publicity issue, about the ACS having a connection to a group of atheists. Bob insisted that wasn’t the case — in fact, they had supported LGBT teams in the past without hesitation.

So that’s where we’re at.

Todd’s frustrated. Those of us at the Foundation Beyond Belief are frustrated. The only people who don’t seem fazed by this are the people at the ACS.

It seems like they’d rather give up $500,000 because it’s raised by atheists… than do a minimal amount of work on their end, or make an exception that could benefit so many people, and give us a National Team to make it easier to mobilize our community to hit that goal.

For what it’s worth, the ACS did agree to provide support to our intern to help get teams organized and they offered to provide some promotion of the Matching Challenge… but it’s a far cry from what could have been. I have to wonder if a donor representing a large national Christian group would have been treated the same way.

I don’t know if anyone reading this has a connection to the ACS or Relay For Life, but I’d love to hear their response to this.

September 7, 2011
The Superstitions of the Presidential Candidates
Next Post