Shocking: Young Americans Have a More Favorable View of Atheists Than Senior Citizens Do

One more result from the new report (PDF) put out by Brookings and the Public Religion Research Institute.

It seems that the younger generation (18-30) is far more accepting of minorities of all kinds — including atheists — than those Americans 65 and older: 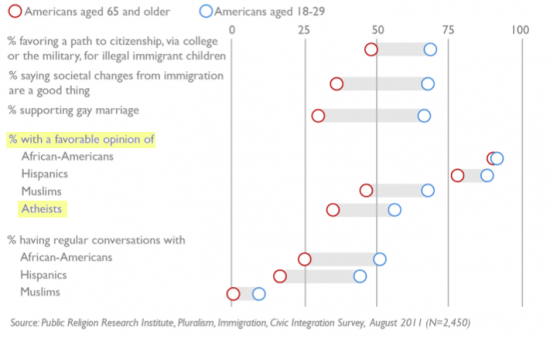 Is anyone surprised by that? The more educated you are, the more contact you’re going to have with other educated people who don’t believe in a god — and the more contact you have with atheists, the more you understand where we’re coming from. This isn’t to suggest there are no religious people in higher education (or dumb atheists, for that matter). But as you meet more atheists, it’s increasingly harder to demonize us. That’s all.

That’s why it’s so important for all of us to come out to people we trust. Start small and work your way up — to the point where you don’t even feel shy telling an acquaintance about your beliefs (if the topic arises).

One more finding about perceptions of atheists:

Only 68% of religiously unaffiliated Americans hold a favorable view of atheists?! I’m not expecting high numbers anywhere on this list, but even that is a lot lower than I would’ve imagined… I wonder why that is.

September 8, 2011
If People of Faith Commit a Crime, Do They Still Represent the Faith?
Next Post

September 8, 2011 We Created God In Our Image, Not the Other Way Around
Browse Our Archives
What Are Your Thoughts?leave a comment