Helping Atheists Get Elected in Arizona

The Secular Coalition for Arizona is doing something so awesome, so unique, and so important, that I’m amazed it’s getting no publicity whatsoever. (Yet.)

They’re organizing trainings this fall… for atheists who want to run for public office. 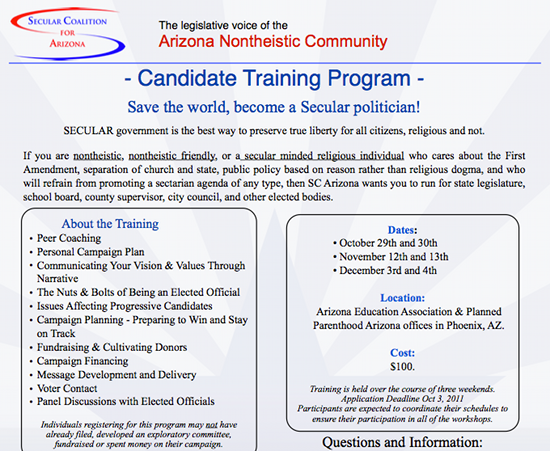 Training will primarily be aimed at those interested in running for local and state level offices such as school board, city council, and state legislature. This training will focus on campaigning, messaging, and the nuts and bolts of effective leadership.

“We hope to inspire some secular candidates. The best way to combat the Religious Right is to elect people who will stand up for the separation of church and state and the rights of secular Americans,” said Matt Schoenley, Executive Director of the Secular Coalition for Arizona.

There is a $100 cost for the training, but it would be hard to find a more worthwhile activity for the Arizona affiliate of the Secular Coalition for America to hold. This is precisely what we need — encouragement and help for qualified atheists who want to run for local (and, later, perhaps statewide and national) elective offices.

September 7, 2011 Questions for Richard Dawkins?
Browse Our Archives
What Are Your Thoughts?leave a comment