The Pastor from Jesus Camp Has a New Book Out September 6, 2011 Hemant Mehta

The Pastor from Jesus Camp Has a New Book Out

It’s been a while since we’ve seen her, but if you’re like me, you didn’t miss her one bit.

Becky Fischer is the woman at the heart of Rachel Grady and Heidi Ewing‘s shocking 2006 documentary Jesus Camp.

Fischer, the founder of Kids in Ministry International, was the one who urged children to be part of the “Army of God,” who said Harry Potter “would have been put to death” had he lived in Biblical times (also adding that “Warlocks are enemies of God!”), and who told the children to speak in tongues (and — can you believe it? — they found a way to do it!)…

In case you missed the film, here are some excerpts:

She’s a despicable person any way you think about it. She knows exactly what she’s doing when brainwashing these children and finds nothing wrong with it. (I, on the other hand, have a serious problem with anyone who teaches children exactly what to believe about god instead of teaching them how to ask the right questions about belief in god, giving them proper guidance along the way, and letting them find their own path.) While the “camp” featured in the movie is no longer in session, her ministry lives on.

Six years after she was filmed, Fischer is now telling her side of the story. Her book is called Jesus Camp, My Story: 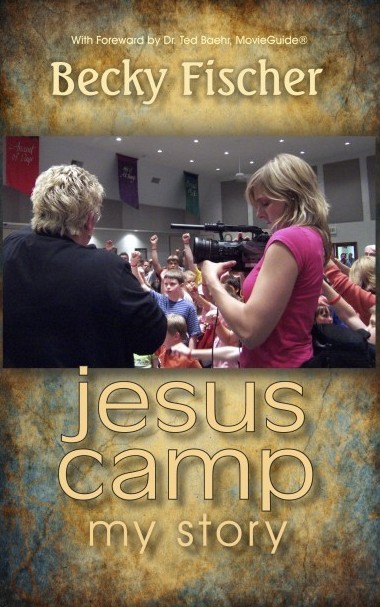 You can download the first chapter for free by going here.

I’ll admit, I was a little taken aback when I found out about her educational hero:

Bill Nye the Science Guy, the host of an educational TV show produced by Disney, was my educational hero. He was a master teacher combining humor, music, and entertain- ment with hard core science, biology, astronomy, and other sometimes hard to understand topics for kids. He created the most fun and fascinating shows to explain these technical concepts.

I used to watch him and think, “Why can’t we use his concepts to teach children about the power of Jesus? Instead of just teaching kids about the body’s circulatory system, why not also teach them about the fascinating things the Bible has to say about the blood of Jesus?”…

Here’s the whole book in a nutshell: The film was *clearly* the result of liberal, anti-Christian bias… but it totally portrayed her accurately, because she doesn’t deny anything we saw in the movie. In fact, Christians have contacted her asking how they could start their own Delusion Factories and she now travels worldwide teaching others how to be just like her.

If you were in the mood to read a good horror story, I think you just found one.

September 6, 2011
Republican Congressperson Wants to Make the 9/11 Cross a National Monument
Next Post

September 6, 2011 A Flipped Version of Pascal's Wager?
"Yeah. It's too often those phrases needed slight modification.Religion's ALLEGED Canadian gf.Them: "I have a ..."
Wisdom, Justice, Love Academy Award Voter to Female Director: ..."
"Typical religious bigot. These people have no problem forcing a person to remain in a ..."
(((Hornèd Pontilibratificus))) Judge Tosses Lawsuit Saying Divorce Violates ..."
"If I was straight, neither Melania nor Ivanka would be an aesthetic I’d look for ..."
Raising_Rlyeh A Baptist Pastor Delivered a Wildly ..."
"Academy Award Voter to Female Director: I Refuse to Watch Your Pro-Abortion FilmDisqus Commenter to ..."
(((Hornèd Pontilibratificus))) Academy Award Voter to Female Director: ..."
Browse Our Archives
What Are Your Thoughts?leave a comment