A Restored Version of the Jefferson Bible September 4, 2011 Hemant Mehta

A Restored Version of the Jefferson Bible

Thomas Jefferson didn’t like the Bible as it was written. He thought Jesus was a good moral teacher, but those miracles were bullshit.

In a letter to William Short in 1820, Jefferson wrote:

Among the sayings and discourses imputed to [Jesus] by his biographers, I find many passages of fine imagination, correct morality, and of the most lovely benevolence: and others again of so much ignorance, so much absurdity, so much untruth, charlatanism, and imposture, as to pronounce it impossible that such contradictions should have proceeded from the same being. I separate therefore the gold from the dross; restore to him the former, and leave the latter to the stupidity of some, and roguery of others of his disciples. Of this band of dupes and impostors, Paul was the great Coryphaeus, and first corrupter of the doctrines of Jesus. These palpable interpolations and falsifications of his doctrines led me to try to sift them apart.

Jefferson made good on his promise by taking a razor to his Bible and cutting out any reference to angels, prophecy, the Trinity, Jesus’ divinity, Resurrection, and miracles. He called the resulting text The Life and Morals of Jesus of Nazareth (a.k.a. The Jefferson Bible).

In November, a restored edition of the book will be published by the Smithsonian. It’s called The Jefferson Bible, Smithsonian Edition: The Life and Morals of Jesus of Nazareth: 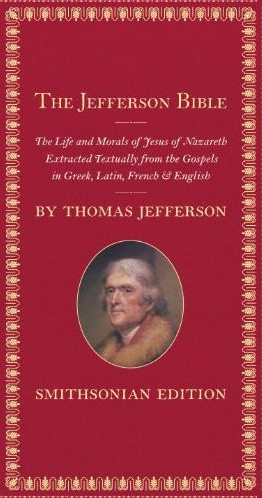 After completion of The Life and Morals, about 1820, Jefferson shared it with a number of friends, but he never allowed it to be published during his lifetime. The most complete form Jefferson produced was inherited by his grandson, Thomas Jefferson Randolph, and was published in 1895 by the National Museum in Washington.

September 4, 2011
It's the Gays' Fault: A Hilarious Swedish Parody
Next Post