So I Got Ahold of Jerry Buell’s Syllabus… September 2, 2011 Hemant Mehta

So I Got Ahold of Jerry Buell’s Syllabus…

Jerry Buell is the teacher who was reassigned out of the classroom because of anti-gay messages he posted on his private Facebook wall (though he was “Facebook friends” with current students, which is just shady…).

Even though he’s now back in the classroom, the evidence shows that Buell had no problem talking about his faith while teaching. While I heard second-hand stories about what his syllabus said, I finally got ahold of the one he used for Honors United States History. Now, we can all read it for ourselves (click image to enlarge): 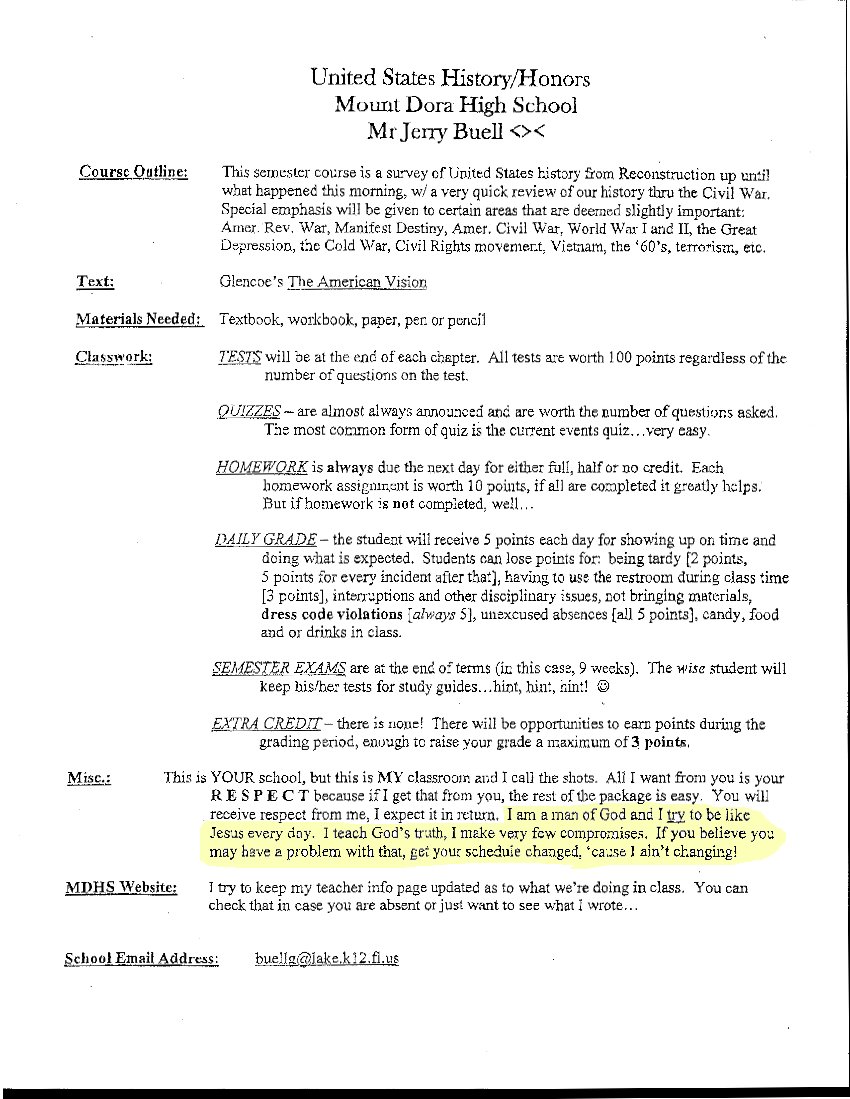 “I am a man of God and I try to be like Jesus every day. I teach God’s truth, I make very few compromises. If you believe you may have a problem with that, get your schedule changed, ’cause I ain’t changing!”

As I wrote before, if I said similar things on my syllabi as an atheist, I would be immediately reprimanded (or worse).

Why isn’t Buell getting the same treatment?

A group called Equality Florida is trying to keep the pressure on his administration and they issued this statement today:

Yesterday, Florida Rep. Scott Randolph (Dist. 36) became the most recent voice to call on the Lake County School Board to strengthen their anti-bullying and non-discrimination policies in light of the virulently anti-gay bias of Jerry Buell, a Lake County school teacher. As a growing number of students continue to come forward to share their classroom experiences of Buell’s anti-gay behavior, we grow increasingly concerned that Lake County has left their students vulnerable to discrimination and harassment by not including sexual orientation and gender identity in their anti-bullying and non-discrimination policies.

I would love for Buell’s supporters to tell me what qualifies as appropriate and inappropriate ways to express one’s beliefs in the public schools. The law doesn’t grant special privileges to Christians, so whatever applies to one group must apply to the others… At what point would they say, “Buell crossed the line”?

You know if an atheist or Muslim teacher *ever* tried to pull the sort of shit Buell did (and continues to do), they’d be getting pilloried for it.