I love when college groups find a way to combine both fundraising and consciousness-raising.

For the second straight year, members of the Pastafarians at the University of South Carolina held a fundraiser on campus by allowing students the chance to throw water balloons at them — “stone” them — for $1. 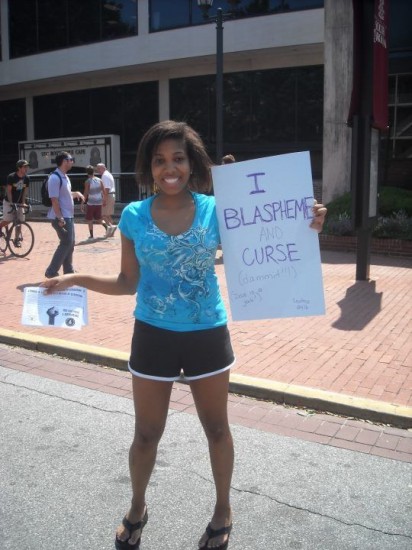 They called it “Stone-a-Heathen” and they got the idea from the Bible:

Besides raising money for a good cause, the group also got out the message that there are some ridiculous things in the Bible if you’re not afraid to actually read it. Their promotional posters contained an assortment of verses in which stoning was the punishment for some silly “crime.” 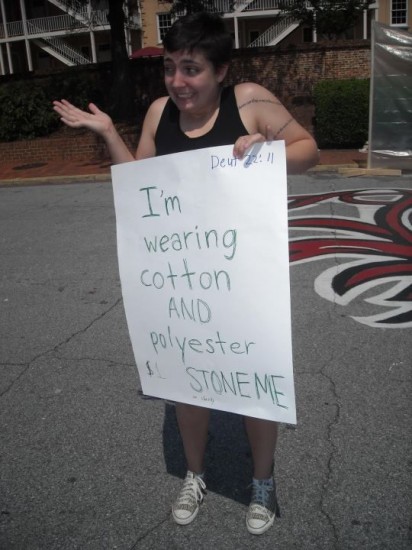 Last year, when I posted about the event, I wrote that some students didn’t want to throw water balloons because they “claimed to be Christian and… it was ‘against their religion’ to stone people.” (Ironic, no?) This year, too, some people found the event offensive. 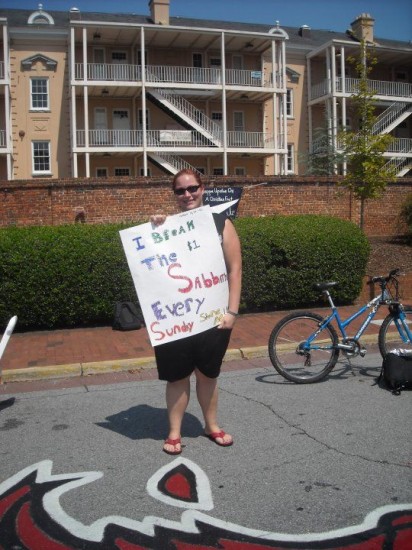 But in case you think stoning is an ancient form of cruelty and doesn’t happen anymore, the Pastafarians spread the message that it still goes on in some parts of the world:

“A lot of people disagree with our group and will not participate in throwing a balloon,” [USC Pastafarians president Kelley] Freeman said. “We’re not trying to get into an argument out here. Today, we’re trying to raise awareness for a much bigger cause.”

This “bigger cause” is one intended to end the suffering of people like Aisho Ibrahim Dhuhulow, whose story was told on the Stone-a-Heathen fliers.

Dhuhulow, a 13-year-old Somali girl, was buried up to her neck and stoned to death for adultery. Only, according to reports from Amnesty International, she didn’t commit adultery; she was gang raped by three men and had the courage to report it.

Pastafarians held up signs reading “I rebelled against my parents. Stone me!” and “I blaspheme and cuss. Stone Me!”

Both are crimes punishable by execution by stoning in countries such as Somalia, Afghanistan, Iran and Sudan.

“People don’t realize that stoning is still used as a form of execution in the Middle East,” [Director Dustin] Tucker said. “It’s unacceptable. This is the 21st century and we should be moving past things like this.”

The not-too-shabby $100 that was raised will be donated to Amnesty International “for their efforts to eliminate this barbaric practice.”

September 2, 2011
My Interview on The Humanist Hour Is Now Available
Next Post