A Fantastic Article About Atheists in Arkansas September 2, 2011 Hemant Mehta

A Fantastic Article About Atheists in Arkansas

Doug Smith wrote a cover story about local atheists for the Arkansas Times. He did his homework, too — it’s one of the most in-depth pieces you’ll ever read about Secular Americans in a mainstream publication: 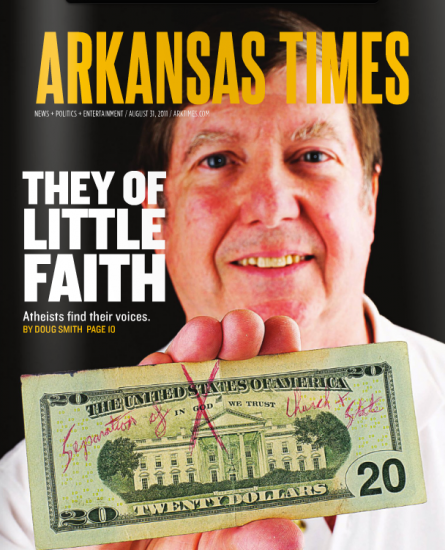 It’s said there are no atheists in foxholes, and that’s baloney, according to a military man we’ll call “Brad.” At an atheists’ social gathering in Little Rock, Brad told a reporter that as an Air Force pilot, he’d been in situations where his life was in danger, and on those occasions, the farthest thing from his mind was seeking assistance from an omnipotent Santa Claus.

“In an emergency, you do what you’ve been trained to do,” he said. “If you’re praying, you’re not doing the very thing you need to be doing, your job.”

It may be another indication of keeping a cool head under fire that although Brad mixed freely with fellow freethinkers in a beer-and-pizza get-together at Vino’s, and answered questions for a reporter, he didn’t want his real name or photograph used in a newspaper article. “The military is a conservative culture,” he said. “One ultra-religious commander could ruin your career.”

The article covers everything from the rejected bus ads to the state Constitution’s (unenforceable) prohibition against atheists running for public office. 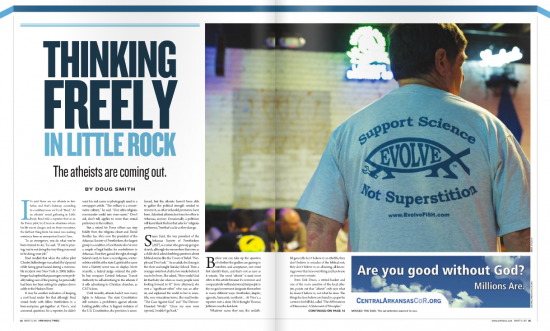 And it ends with the suggestion that what we’re doing — publicizing our existence and doing it without disparaging faith — is working:

The [local Religious Right activist] Jerry Coxes are right to fear the atheists’ ads. Advertising works; a familiar, friendly kind of atheism will almost certainly produce more atheists, when combined with all the other reasons that people lose faith. The Arkansas Razorbacks have lost their best running back before the season’s even started. Would a merciful God let that happen?

If any religion reporter wants to write an interesting story, sure to get tons of shelf-life and comments online, just visit a local atheist group. No doubt you’ll find stories of conflict, family tension, and living life as a minority… as well as stories of generosity and kindness despite a lack of belief in a higher power.

(Thanks to Martin for the link!)

September 2, 2011 My Interview on The Humanist Hour Is Now Available
Browse Our Archives
What Are Your Thoughts?leave a comment