Reader Nic shares this story (via email) about how Christians seem to get special parking privileges in Philadelphia:

I used to live just two blocks from Tenth Presbyterian Church in Philadelphia, and I remember how the streets would fill with cars on Sunday mornings, all of them conspicuously parked in areas that would otherwise be off limits during the rest of the week (like, for instance, in one of the city’s few reserved bike lanes).

They would all have a neat little placard in the windshield stating the owner was attending church service, which would excuse their otherwise illegal parking. And this in spite of the fact that there is a large parking garage just two blocks from this church.

Evidently, the nature of the activity (worshiping) in itself warrants an exemption, or the church is provides such an essential service to the community that it has earned amnesty from the rules for its members.

So, if worshiping qualifies, what else would qualify, and who decides? Who hasn’t tried (and failed) to justify a parking ticket based on what they were doing when they got the ticket? I once got a ticket for parking illegally at my girlfriend’s front door for 5 minutes in order to drive her to the ER while she was having a seizure. I pleaded for amnesty. No luck. What if I’d said I was praying with her? I’m being facetious, of course, but it nevertheless remains that there’s an unspoken determination that worshiping is somehow universally noble, and practitioners should be treated differently. It’s the same prevailing bias which makes people respect a “man of god” as automatically good, moral and decent.

Chicago tried the same thing a while back, though I’m not sure if they won. It’s incredible to watch how pastors pretend like they’re not asking for unique treatment:

“We’re not asking for special privileges,” said the Rev. Philip Blackwell, pastor of First United Methodist Church at Chicago Temple. “We just happen to be religious institutions. The strange hours that we keep are complementary to the way the rest of the Loop gets used. If we’re going to co-exist in the city we have to have some nuanced understanding about how space is being used. That goes for government vehicles, bikes.”

If anyone has insight into this issue (in any city), I’d love to know what’s going on and why the local governments grant churches special treatment. Would attending atheist gatherings also qualify under the rules?

On a side note, some anonymous rapscallion created a website called ChurchParkingForAtheists.com — if you visit, you can print out a placard to put on your car on Sundays for free parking in parts of Philadelphia. The downside is you have to pretend to be a Christian for a couple hours. 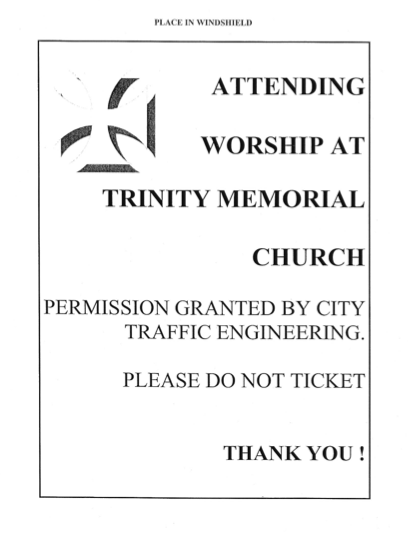 It’s a clever idea, but we shouldn’t have to resort to this. Everyone should get the same exemptions or none at all.