How would you like it if the new manager at your workplace came in and said you’d have to reapply for your job because there are new requirements for all employees? That’s what happening at a daycare in Waukee, Iowa.

Happy Time Daycare and preschool, while housed in a church, didn’t sound like that bad an environment… but under new management, it’s now going to be called the Point of Grace Children’s Academy and all 22 workers will have to be rehired under new guidelines.

A teacher at the daycare spoke to KCCI about the changes on Tuesday on the condition we not reveal her identity.

“My thought is this can’t be happening, this isn’t real, this is out of the blue,” said the teacher.

She said she was upset with what was included with the letter.

The Christian Lifestyle Commitment Agreement given to workers states that employees must abstain from: sexual relationships outside of marriage, homosexual conduct, viewing pornography, drinking alcohol, using profane language and behavior that would question Christian testimony.

The points each included a bible verse or two to explain them.

The requirement that employees regularly attend church is also stated at the top of the employee application.

Let’s get more specific. According to the application — oh, by the way, they’re hiring! — these are non-negotiables (PDF):

That’s not all, though. Check out a couple of the other questions on the application: 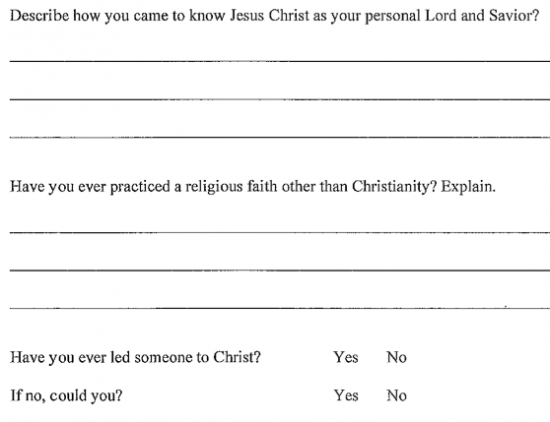 Because all of that is what matters most when it comes to taking care of children.

(I wonder what they all do during Happy Hour… or if that even exists.)

The anonymous teacher who told KCCI Des Moines about the new rules said she’s looking for a new job. I don’t blame her. Who’d want to work for management that demands to know what you’re thinking and doing even when you’re not on the clock?

I feel bad for the current employees who were barely given any notice about the management change until recently:

Katie Roberts, 18, of Waukee, was one of the Happy Time employees who received a letter late Friday afternoon. She said a member of the church staff informed them, without any prior notice, that Happy Time was closing.

“They took us out into the atrium and basically said, ’Happy Time Daycare is no longer here as of September 6,’” Roberts said. “’You will need to reapply for your job. Here’s your packet.’ I just walked away. I was bawling.”

“One of my co-workers is a lesbian and she said, ’I can’t reapply. You can’t be a homosexual,’” Roberts said. “It’s ridiculous. She was just doing her job.”

Bonnie Ribbens, one of the Happy Time directors, was also let go.

“I am confused and hurt and distraught over this,” Ribbens said. “I felt I was great in my position and I met the requirements.”

It’s not that the new requirements are illegal — The church runs the place and they’re free to discriminate as they wish. But you have to wonder how these employees will interact and communicate with the children in their care. What level of indoctrination must take place within the church? How do they punish misbehaving kids?

While the application asks for references, work history, and teaching qualifications, more space is allotted to discuss how strong a Christian the applicant is. The priorities are all messed up and I don’t know why any parent, even a Christian one, would want their kids attending the school. At least some of them are removing their children from the program:

Happy Time parent Andi Tisor of Waukee said she’s most upset that parents were not given any inkling of the changes prior to Friday. The way the church treated staffers was also disconcerting. The end result, Tisor said, was to remove her 16-month-old daughter from the facility.

“The church is basically telling me that because of their (staffers) lifestyles, they are not qualified to take care of my daughter,” she said. “I’m the parent and I have every right to pull my daughter out of that daycare and take her somewhere else. I do not need to be told how to judge someone else’s lifestyle.”

Neither Nicholson nor Tisor were members of the Point of Grace Church.

Parents pulling their children from Happy Time Daycare and looking for other options are meeting Thursday, from 6 to 7 p.m. at the Waukee Public Library.

(Thanks to MoonFairy4 for the link!)

August 25, 2011
On the Internet, Christianity is Losing By a Long Shot
Next Post