***Update***: I wrote a follow up piece to this post here. Turns out Jerry Buell hasn’t kept his beliefs private after all…

When I first heard what Jerry Buell said about gay people, I wanted to join in on the backlash. But the more I read about him, the more sympathetic I become. 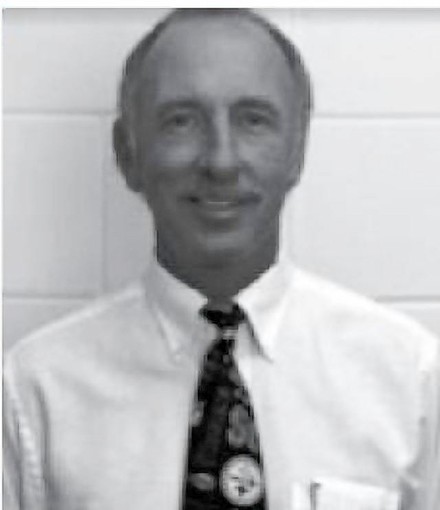 Here’s the story so far: Buell is a former Teacher of the Year at Mount Dora High School in Florida. He’s a Christian. And he said the following things on his personal Facebook page:

“I’m watching the news, eating dinner, when the story about New York okaying same sex unions came on and I almost threw up. And now they showed two guys kissing after their announcement. If they want to call it a union, go ahead. But don’t insult a man and woman’s marriage by throwing it in the same cesspool as same-sex whatever! God will not be mocked. When did this sin become acceptable???”….

“….I will never accept it and refuse to condone it or shut my eyes to it. It is an insult to the marriage between my wife and I. We are married, don’t know what the heck those people call it but it ain’t a marriage…

His views are really no different from most mainstream Christians… or from many teachers in public schools all over the country. People are rightfully upset with what he said — myself included — but should he be punished for it?

Keep in mind: there’s no evidence he acted on these beliefs in the classroom. He never cast an evil eye on gay students in class. He didn’t give gay students lower grades than straight kids for the same work. He wasn’t preaching to his social studies students. On Facebook, he wasn’t demeaning specific students of his. This was private speech made outside the classroom, the kind of speech you hear Christians pastors say on a regular basis.

I’ve been in a position like his before. I’m *very* public about my atheism outside the classroom and I’ve said things about religion on this site that would no doubt make Christian students uncomfortable. But it never affects my classroom — I would never treat an openly religious student any different from an openly non-religious one. My job is to teach them math, not convince them that their parents’ religious beliefs are full of shit. When a Religious Right group encouraged parents to remove their students from my classroom, my administration stood up for me precisely because they knew I didn’t bring my activism into the classroom. Whether they agreed with me or not on the social/political issues was irrelevant.

I’m sure there are gay students, now aware of Buell’s private beliefs about homosexuality, who might feel uncomfortable around him. But as long as he treats them with respect at school — and there’s no evidence that he does anything but that — his private views should not matter.

I’m sure there are religious students I’ve had in the past (or will have in the future) who know (through various means) about my atheism. Should I be punished because they feel uncomfortable about it? Absolutely not.

Buell doesn’t seem to be getting them same opportunity. He’s already been punished, “reassigned to administrative duties while comments on his Facebook page are investigated.”

I hate defending Liberty Counsel on anything, but the Christian legal group put out this statement… and they have a point:

The school district’s response to Buell’s comments is unconstitutional, violating his right to free speech. Mr. Buell is being investigated and punished for communicating his mainstream objection to homosexual marriage, an objection shared by a large majority of his fellow Floridians who have outlawed homosexual marriage through a constitutional amendment. If the First Amendment does not protect Mr. Buell’s right to voice his personal opinion, on his personal time, from his personal computer, on his personal Facebook page, then the First Amendment means nothing.

Buell did make one lapse of judgment that the school ought to criticize him for:

Buell’s Facebook page was private, so only approved friends could view his comments. Buell has more than 700 friends, including many current and former Mount Dora High School students.

My personal policy has always been not to “friend” students currently at my school. (We now have a district policy that says the same thing.) Once they graduate, of course, the school’s not keeping tabs on them, and they can Facebook friend you and no one will care. It’s an easy way to keep in touch and see how they’re doing. Some teachers I know friend students after they graduate. Some don’t. It’s a non-issue, though.

If Buell was making his comments around current students, I can understand how people could have a problem with it. If that’s the case, and there’s no official policy against friending students, the administration should have a talk with him about the problems with that. (Basically, if the school can’t keep tabs on your conversations with current students and their parents, you’re opening the door for all sorts of trouble, even if nothing shady is happening.) According to WKMG Orlando, “other Central Florida districts have completely forbidden teachers from befriending students online.”

That has nothing to do with the comments he made.

The student who reported Buell graduated from high school nearly a decade ago, in 2002.

Brett Winters, the former class president and prom king who complained to the school district, said “hateful” remarks like Buell’s fuel bullying and heap even more emotional pressure on students struggling to sort out their own sexuality. Things are tough enough in high school — students shouldn’t have to wonder if a teacher will treat them unfairly because he is repulsed by people like them.

If Winters is going to criticize Buell for this, then he needs to criticize every teacher who attends an evangelical church in the area, because they believe the same things (if not worse). The only concern students and parents should have is what goes on in the classroom, and no one is saying that Buell is a bigot inside the classroom. End of story as far as I’m concerned.

A teacher’s personal beliefs should not come into play at work. There are teachers who are Creationists, polyamorous, Jewish, swingers, drug-users, Republicans, atheists, and homosexuals. None of that matters as long as it doesn’t affect their teaching. No doubt some of your own teachers held views that you find abhorrent, but you have no right to complain if they’re doing their job at school. Save the energy for anti-gay teachers who pontificate in the classroom instead of doing their jobs.

There’s a Facebook page that says “DON’T support homophobic Jerry Buell. Keep him suspended.” I hope you don’t join that because he shouldn’t be suspended. There’s also a page in support of him, but I’m not eager to join it, either, since it’s become a page focused on Jesus instead of free speech.

This is a free speech issue. You don’t have to like what Buell said — I know I don’t — but everyone has the right to believe what they want, even if it’s crazy, untrue, or harmful. As far as we’ve seen, when Buell entered the school, he left his private beliefs at the door. That’s all we can ask for.

Now, stop picking on this poor bigot and let him get back into in the classroom where he belongs.

***Update***: Reader fred5 points out some potentially damning evidence that Buell may not have left his beliefs at the door when he went to work. A Google Cache of the school’s website (from August 10th) shows Buell’s very godly biography (click to enlarge):

First and foremost, I am a man of God. I try to teach and lead my students as if Lake Co. Schools had hired Jesus Christ himself. That doesn’t mean I give a sermon and serve communion each day…what it means is I try my very best to teach and serve and minister to my students as a teacher led by and connected to the Creator of the Universe…

Lake Co. Schools and Mt Dora HS tell me what to teach; God guides me in how I do that, and it is all done with a Servant’s heart, to the best of my abilities.

That bio has since been purged from the school’s website. 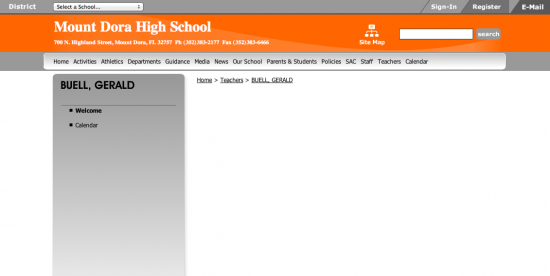 That doesn’t mean he was preaching in class, but Buell’s certainly not doing himself any favors — and someone’s trying to cover it up. It makes me wonder what else he’s hiding…

(I’m also *really* curious how that bio slipped through the school’s website and IT staff for FSM-knows how long. No one saw anything wrong with that before?! Who manages that site?)

In any case, the bio isn’t a smoking gun for me. He’s saying exactly what most devout Christians would say — they won’t preach in class, but they try to be a good “servant.” It’s just Christianese. At least someone figured out it shouldn’t be there.