I love this picture 🙂

Reader John snapped this image of his friends Amber and Jason with Congresswoman Michele Bachmann‘s husband Marcus during the GOP Straw Poll in Iowa yesterday: 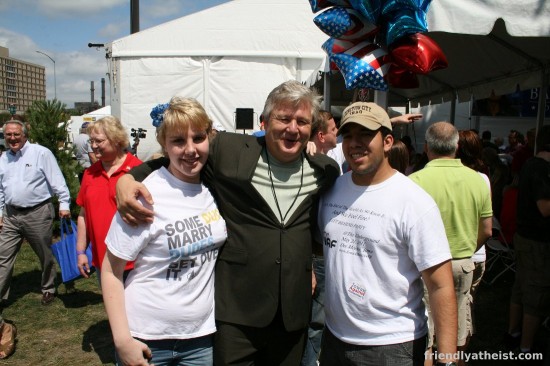 When I was standing outside Bachmann’s tent, Marcus Bachmann was there shaking hands with supporters. One girl walked up wearing a t-shirt that said, “Some dudes marry dudes. Get over it.” She shook his hand and walked into the tent. Asked if she’d vote for Bachmann, she said she would… if Bachmann became an atheist.

(That is *so* much cooler than when I met former Iowa Governor Tom Vilsack‘s wife back when he was running in the Democratic primaries leading into the 2008 election.)

August 14, 2011
A Couple Updates About Military Atheists
Next Post