Woman with a Mancard: My Night at Kirk Cameron’s Marriage-Strengthening Event

This is a guest post by Annie Thomas. Annie is a science teacher and writer from Gainesville, Florida. She attended this event at my request and donated the ticket reimbursement to Atheist Nexus.

The Hare Krishnas on University Avenue chanted and drummed as I started my hour drive south. I drove past the Islamic Center, the YMCA summer camp, and a variety of tiny little churches whose denominations I had never heard of before moving to Florida years ago. Once in the country, I listened to an NPR story about the cross at Ground Zero, as I passed a horse farm named “Almost Heaven.” When I stopped at a store to pick up a bottle of water, the clerk instructed me to “have a blessed day.” I enjoy the freedom of living in a university town, as it tends to be more secular, or at least more tolerant, than the surrounding area. My drive south was not just a directional journey, but a cultural one as well. I was headed to the First Baptist Church of Ocala to attend a “marriage event” hosted by evangelical Christian (and childhood star of “Growing Pains”) Kirk Cameron. In the event’s promotional video, Cameron promises to teach me how to strengthen and protect my marriage… with the help of the Bible.

I wondered if the techniques he was going to teach would be secular at the bone, and simply fattened up with Bible verses and prayer. I was curious if the message could be beneficial to people who were not evangelical Christians. Also, I wanted to find out about Cameron’s atheist past and what made him abandon reason for faith.

I settled into a pew in the back of the big box church and looked around the crowded main floor. I was the only “single” woman in view, and I didn’t see any people of color until the intermission (two out of 1,000 participants, according to my estimate). People seemed pleasant and looked dressed up. Most of the women were adorned with elaborate hairstyles, manis and pedis, and wore fine jewelry and clothing (See 1 Peter 3:3). Tickets were $25 per person, unless you chose to come early for a meet-and-greet with Cameron, which cost an additional $10. The main event lasted 3 ½ hours.

Warren Barfield, a Christian singer and songwriter shared the stage with Cameron. Throughout the evening, we listened to Barfield sing and play his guitar, interspersed with his own testimonial and stories about faith, family and life. He was likable and told lots of jokes (many of them funny). When he was showing the crowd one of the t-shirts on sale in the lobby, which read, “I love my husband,” he promised if we ladies wore this shirt we would spark conversations with others, and be given opportunities to share our faith. He joked, “Guys. If you wear this shirt, you’ll start a conversation… but you’re probably at the wrong conference.”

Kirk Cameron came up on stage while Barfield strummed and sang part of the “Growing Pains” theme. A bit of fanfare ensued. Warren introduced him as a “Granola” because he comes from California, “the land of fruits and nuts” (the audience laughed again). Cameron gave a little introduction, talked at length about “Seaver Fever” and finally spoke of his atheist past. He dismissed evolution by stating that he knew he was more than the product of some chemical reactions or a cockroach waiting to be crushed. He reminisced out loud about pondering, “Is there something other than my blind faith in evolution and atheism?” Later in the evening, he made a reference to Creationism: “The same guy who designed our universe also designed our marriages. And I’ve read his manual. And his word trumps Oprah’s every time.” (“Amens” from the audience.)

Marital advice was scant during the first half of the program. Cameron instructed us to write down three “Principles from God’s Word”… even though no Biblical references were tied to them and I don’t remember ever reading the phrase “Marriage is awesome” in the Bible.

Fuzzy logic right out of the gate with number one. Marriage was designed by God, so marriage can’t fail. We were designed by God, but we can fail? Which is it? The three points were elaborately illustrated by Cameron. He became most fired up when discussing principle number three. “Pornography and sexual immorality will destroy you. It devours people in their thought lives, all the while being hidden to others. Burning bridges to your feeding grounds [sin] only works for a while.”

The concept of a war strategy and fighting for love was intertwined throughout the evening, and sometimes in rather frightening ways. After the intermission, we watched a trailer for Cameron’s upcoming documentary Monumental. Up to this point, there had been a lot of jokes and laughter, so when I saw Cameron on screen, running through a recreated pilgrim village, with a voiceover asking, “What if our forefathers left us a map?” I thought this was a fun little spoof on The Da Vinci Code or National Treasure. But he was serious. The movie teaser is not out yet, but you can watch other videos about the making of the documentary here. Some other quotations from the teaser included: There’s “something sick in the soul of America” and “Our history has not been forgotten; it’s been rewritten.” After the teaser, Cameron added, “I see some fruit on the tree of America that is very concerning.” He did not expand on this comment. But the most worrisome statement he made was that we needed to “build a brand new nation and use the Bible as a blueprint.” (Heads up, FFRF!)

The marriage advice during the second half was all taken from one Bible verse: 1 Peter 3:7. “Likewise, husbands, dwell with your wives in an understanding way, showing honor to the woman as the weaker vessel, since they are heirs with you of the grace of life, so that your prayers may not be hindered.”

From this one verse, Cameron painstakingly created six concepts:

Most examples he gave were very basic in nature. Eat dinner with your wife. Give her genuine compliments… often. Take the trash out. Nothing earth-shattering. However, some of his specific and “practical” messages were downright sexist.

Before giving this information to the audience, Cameron said his message was for the guys, because, “I would be a fool to try and tell you ladies what to do.” (Big laughs.) But that butter melted fast. “If something is wrong with a company, go to the CEO. If something is wrong with a team, go to the coach. Us men have been given by God the role of leadership.” Whenever he referred to how hard a woman worked during the day, it was always in reference to her cooking, cleaning, and caring for the children — never to a woman’s professional life.

To illustrate how a man could honor his wife in public, Cameron offered a personal anecdote: “I was in a movie a few years back… Fireproof.” (It was good that he mentioned this… in case we missed the previous seventeen references to his hit Christian film.) He explained that although he and his wife were both actors, they have a rule never to kiss another person, even on screen. During the filming of the movie, there was a scene that would not have been as moving if the husband and wife did not reconcile with a kiss. Cameron was giddy with pride while he explained the clever way he and his wife skirted this sticky situation.

He had his wife wear his co-star’s dress, don a wig, and act as a “kiss double.” Really.

Things veered from juvenile to creepy when he said, “Protect your wife by managing your anger and aggression in a conflict. Don’t throw things, punch the wall, or use a deeper voice during an argument.” (I thought this was common knowledge…) Before another video vignette, Cameron told the husbands, “If your wife cowers in front of you — ever — you have crossed the line and you are not protecting her.” That’s the main concern? That the man is “not protecting” his wife? Why not call it what it is: the result of bullying and emotional abuse.

“When you married,” he told the men, “You signed up to play the role of Jesus Christ to your wife.” (I looked around to see the reactions of others, but no one was vomiting.) He continued, “To the point of warring against sin. To treasure her, so she will be spotless and blameless.” He then invited the men up to the front to pray with him. He later added that they could go back and get their wives, which created a bit of a congestion problem, even in such a large church. I thought they were going to get up on stage and hold hands, but the stage entrances were blocked, so the men (and some women) just stood in the aisles near the stage. Most of the men looked around, searching for direction in what to do next. A few groups showed some gumption and formed mini prayer circles within their aisles. The whole thing seemed pointless, as I felt everyone could have prayed again (we prayed a lot) from their seats. It felt like a time killer more than anything else.

After these six points were presented — ad nauseum — Cameron announced that he had something for the guys in the audience. He instructed the wives that he had cards that were for the husbands’ eyes only, and he asked that the husbands always carry them, but not show them to their wives. I conveniently forgot to bring my husband with me, and I don’t particularly like being told I can’t have something because I’m a woman, so I knew I had to get a card. When the volunteer came to my row, she carefully counted how many men were seated, and handed me the pile. I took one off the top, slipped it in my purse, and smiled as I handed the rest of the stack to the woman next to me. Her eyes widened to the size of meatballs, but she said nothing. It was labeled “MANCARD” on the front and had the very six steps he just spent an hour explaining (!), so I’m unsure why the card’s contents were such a big “secret.” I have the unabridged version of the card in my notes anyway, so there. 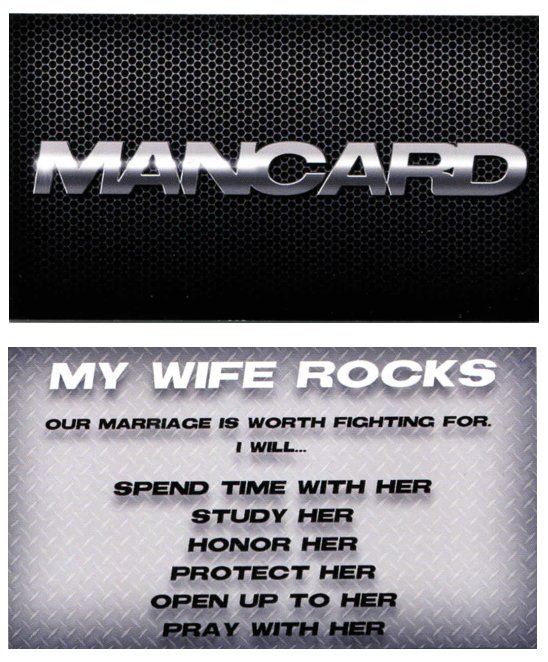 The evening ended with Cameron pitching the merchandise available (once again). I could feel eyes on me when he gave a message for those women whose husbands, for whatever reason, couldn’t join us tonight. He said to tell our husbands that “God knows exactly where you are.”

I may have been the only women not wearing high heels, so it was easy for me to sprint out the exit and get in my car before anyone else. I called my husband to say hello once I hit the road. I was excited to share my victory of card-snatching and QBAPLD (quick big-ass parking lot departure). I told him that Kirk Cameron had a message for him. He laughed and waited. I repeated, “God knows exactly where you are.” My husband let out an audible scoff. “Everyone knows where I am. It’s 10:30 at night. I’m in my recliner.”

August 10, 2011 SSA 2011: Dave Silverman on a Fight Atheists Can Win
Browse Our Archives
What Are Your Thoughts?leave a comment