The Best Young Math Problem Solver in the World Is a Girl August 10, 2011 Hemant Mehta

Remember how awesome it was that the top three finishers at the Google Science Fair were all girls? They got some well-deserved attention for that.

Here’s a story that probably won’t get as much press, but it’s just as impressive considering how few women go into mathematics.

At the 2011 International Mathematical Olympiad, 18-year-old Lisa Sauermann not only obtained a perfect score — giving her sole possession of first place — her gold medal performance put her atop the IMO Hall of Fame.

In other words, she’s the best problem solver in the more-than-50-year history of the competition. And she’s a she.

In case you’re curious, these are three of the six problems she had to solve in this year’s tournament… 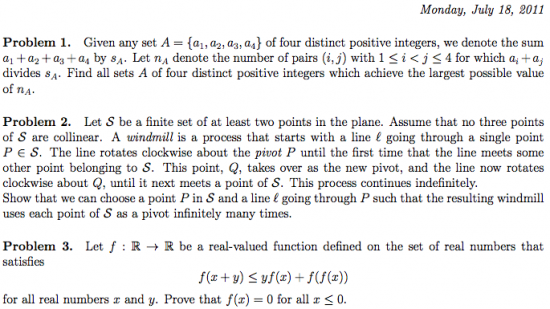 (Please don’t ask me to explain them…)

August 10, 2011 Brief Atheist Book Related News
Browse Our Archives
What Are Your Thoughts?leave a comment