In the midst of all the chaos in our government, Sam Shore pointed out some happy news last week regarding women’s health:

On August 1, 2011, the Department of Health and Human Services (HHS) adopted additional Guidelines for Women’s Preventive Services — including well-woman visits, support for breastfeeding equipment, contraception, and domestic violence screening — that will be covered without cost sharing in new health plans starting in August 2012. The guidelines were recommended by the independent Institute of Medicine (IOM) and based on scientific evidence.

That sounds incredible. It’s about damn time they did this, right?!

Unless you’re the Illinois Family Institute… in which case you read that paragraph and saw it as an attack on everything you value.

Here’s the headline for the email alert they sent out:

Sounds freaky. Like HHS is going to shove a knife and a baby in the hands of every American just to see what we’ll do!

Their alert is full of wisdom… as is tradition.

Why should every American be forced to subsidize the destruction of human life through abortifacients especially when there is a more effective and surer way to avoid unwanted pregnancies — abstinence? Why should Americans have to pay for sexual risk-taking or irresponsible behavior?

Yeah, women who are married or in a committed relationship but not ready to have a child just yet! Why don’t you just tell your hormones go back to church where they belong?

But surely, HHS has no response for the claim they’re subsidizing abortifacient drugs, right?

Women will have access to all Food and Drug Administration-approved contraceptive methods, sterilization procedures, and patient education and counseling. These recommendations do not include abortifacient drugs.

IFI loses that round. But apparently they know that because they address that issue directly:

These abortifacient drugs act to break down the lining of the uterus so that it is either unreceptive to implantation by a fertilized ovum or unable to sustain an implanted embryo — killing a newly conceived human being.

In other words, these drugs stop a baby from ever… becoming a baby… so HHS must be supporting the killing of… um… HUMAN BEINGS!

They’re misleading you about the “abortion” thing. But what about when they point out that every health insurance plan covers these pseudo-abortion-drugs?

This means that every health insurance plan will be required to cover “emergency contraceptives” or “morning-after pills” such as Plan B.

Surely, HHS has no response for this, either… right?:

** Group health plans sponsored by certain religious employers, and group health insurance coverage in connection with such plans, are exempt from the requirement to cover contraceptive services. A religious employer is one that: (1) has the inculcation of religious values as its purpose; (2) primarily employs persons who share its religious tenets; (3) primarily serves persons who share its religious tenets; and (4) is a non-profit organization under Internal Revenue Code section 6033(a)(1) and section 6033(a)(3)(A)(i) or (iii). 45 C.F.R. §147.130(a)(1)(iv)(B). See the Federal Register Notice: Group Health Plans and Health Insurance Issuers Relating to Coverage of Preventive Services under the Patient Protection and Affordable Care Act (PDF – 108 KB)

So there’s a religious exemption… and every health insurance plan doesn’t have to cover the contraception services.

Media reports claim that the Obama administration has incorporated an amendment to the new regulations that permit religious institutions that provide health insurance coverage to exempt themselves from the contraceptive mandate. But if you don’t happen to work for a religious institution, you have no individual conscience rights.

Ahh… so if you work for a public institution, your religious label doesn’t grant you special treatment. Shocking, that.

IFI must know they have no argument because they jump to their last resort: excessive and unnecessary use of quotation marks.

The U.S. Department of Health and Human Services (HHS) recently announced a new and onerous mandate which will force all health insurance policies to pay for free contraception without co-pays or co-insurance, including every “birth control” drug or device approved by the Food and Drug Administration (FDA).

Birth control? Please. Obviously, HHS is just handing out baby-stabbin’ knives to anyone who asks. 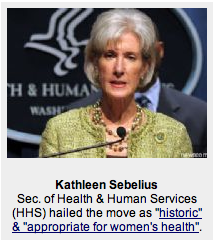 We all know this can’t be historic. It’s only never been done before. And “appropriate“?! Hardly. This only impacts women who voluntarily choose to use the contraception methods… and that’s just uncalled for.

The sad thing is that some of the very women who will need to take advantage of these contraceptive services are the daughters of IFI members — they’re among the ones who know the least about safe sex and the most likely to be at risk of an unplanned pregnancy. As much as I’d love to see IFI patriarchs pledge that their families will never take advantage of these HHS services (if that option applies to them), that’d only hurt the women who need the services the most. And, unlike IFI, I want to see women get the help they need in those situations.

August 9, 2011
A Pastor Who Condemned Rick Perry's Pray-a-Thon
Next Post

August 9, 2011 Seth MacFarlane Event… Re-Rescheduled!
Browse Our Archives
What Are Your Thoughts?leave a comment