A Better Response to “The Response” August 7, 2011 Hemant Mehta

A Better Response to “The Response”

In light of Texas governor Rick Perry’s “The Response,” I’m writing briefly about prayer. Prayer is one of those things that religious people love and atheists love to hate. But actually, I’d like to put forth the idea that prayer can be—can be—a useful thing. I’m not the first atheist to say so, but prayer is not completely useless, and has several redeeming qualities. Prayer helps people relax, focus, and feel like they are in control of things they really have no control over. 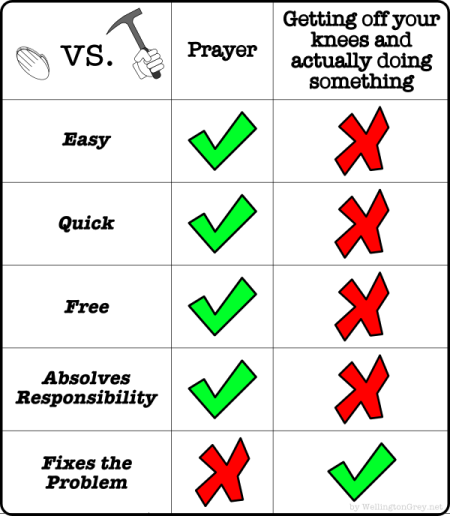 Prayer doesn’t have any effect on the outside world, of course. Plenty of studies, as well as common sense, establish this; but prayer—like its sister pursuits meditation, music, and exercise—does some wonderful things for our brains. What it does not do is solve real-world problems per se. That requires, quite frankly, the rolling-up of sleeves.

The United States does have its problems: economic, as we saw last night with the S&P downgrade of the US credit rating, as well as social. But as the bumper sticker says, two hands working do more than a thousand clasped in prayer. Today in Reliant Stadium, we’ve 60,000 (30k people). Argh.

I’m not going to call this a complete waste of time. If it helps people feel better and gives them hope, that’s something. It’s a misplaced hope, but it’s better than apathy or cynicism, if you ask me. Recognizing that the world isn’t perfect is a step in the right direction if we want to make things better. Now, we just have to educate people on the best way to fix what’s wrong. Prayer—demonstrably—isn’t it.

On Facebook there’s an event today, a response to The Response, called “Day of Debauchery and Gluttony – A Great Day of Sinning!” At present count it has about 36,000 (virtual) attendees. Now, I’m as much a fan of debauchery as anyone, but I think this is the wrong way to counter The Response. Our world does have problems, and we do need to work together to fix them. Prayer and fasting are simply ineffective ways to do that. We can do better.

Let’s make a concerted effort to educate our neighbors on more-effective ways to improve things. Charity—in particular to, for example, The Richard Dawkins Foundation for Reason and Science, Sam Harris’s Project Reason, and The BIll & Melinda Gates Foundation—is a great place to start. My personal favorite is VillageReach, on the advice of GiveWell, a charity that reviews and empirically rates other charitable organizations. If you don’t know where to start, I recommend Peter Singer’s absolutely life-changing website & book, The Life You Can Save: Acting Now to End World Poverty.

If you can, volunteer for the secular charity of your choice this weekend. Donate to the secular charity of your choice today, and monthly if you can, and encourage everyone you know to do the same. Be an activist for change. Let’s do some good, and teach those religious people a thing or two about what it takes to make a real difference in the world!