Court Rules Against Christian Who Left His Pets’ Healthcare to God 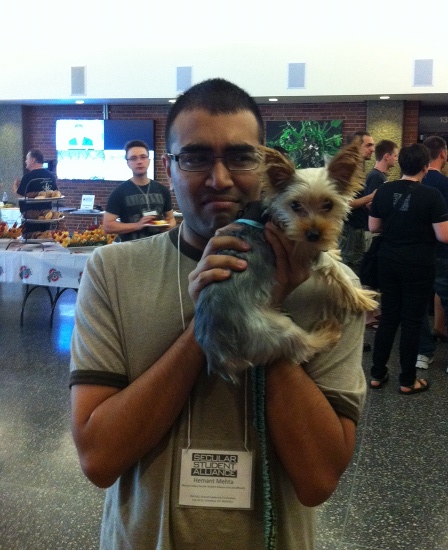 Even I would agree, though, they have a right to be cared for properly.

In Texas, they have animal cruelty laws that say (among other things) if you don’t take care of your pet, you’ll be subject to punishment/penalties. Just the way it should be. That includes taking your pet to the vet when it needs treatment.

Who in the world would be opposed to anything like that?

The same Christians that don’t take their children to the doctor because they believe God will fix everything. No, really. They think prayer is going to cure the pets’ problems.

On April 10, 2009, Myers went to the animal shelter in Fort Worth to reclaim some animals. An animal cruelty investigator subsequently conducted a follow-up investigation of Myers’s home to determine if it was safe for the animals to return there. The investigator had warned Myers on prior occasions that state law required him to provide adequate shelter, food, and water and that it is unlawful to tether animals on a chain. The investigator reiterated these warnings on the day of the investigation and gave Myers a handwritten notice of violations that the investigator observed. When the investigator returned to Myers’s home the following day, she observed that the condition of a dog that needed treatment had worsened, so she took pictures, obtained a warrant, and seized the dog the following day. A detective with the Fort Worth Police Department who spoke to Myers about the animal cruelty allegations testified that Myers admitted that he was the caretaker of the dog in question, he had failed to provide adequate care, and he did not feel the need to provide veterinary care to his animals. The detective used this information to obtain and have issued an arrest warrant, and a police officer arrested Myers a month later. A jury convicted Myers of animal cruelty and assessed a fine of $2,000, and the trial court sentenced him accordingly.

Myers argued that veterinary care “violate[d] the Christian command to trust God’s power to heal.” He sued. He lost. He appealed. And now, he’s lost again. On Thursday, the appeals court upheld the lower court’s ruling.

A lawyer can correct me if I’m wrong, but the ruling seems to say that Myers argued the penalty punished him for his religious beliefs… but he wasn’t arguing that the animal cruelty laws were themselves unconstitutional, which is what the court wanted to hear. They’re dismissing the case for that reason while avoiding making a judgment call about his religious beliefs.

Myers urged the jury to consider his religious beliefs, but he never argued to the court or requested a ruling on the constitutionality of the statute. Nor did Myers’s motion for new trial challenge the constitutionality of the statute. Consequently, Myers failed to preserve this point for our review.Accordingly, we overrule Myers’s sole point, and we affirm the trial court’s judgment.

Whatever the reason is, for now, animals are safe from the hands of Christians in Texas who think god will somehow fix everything and who refuse to take their pets to professionals because of that.

It’s an irresponsible and, yes, cruel move. Vets have far more power to heal than any god ever did.