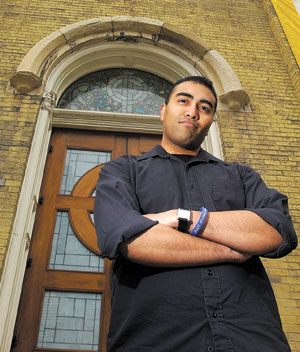 I have an announcement about Hemant. Heads up: I’m going to gush a bit.

Today marks the start of the Secular Student Alliance’s Annual Conference, which promises to be an exciting weekend full of inspiration, camaraderie, and – let’s face it – a whole lot of fun. We (full disclosure: yes, we – I work for the SSA) have a great line-up speakers including Dan Barker, PZ Myers, Greta Christina, Dave Silverman, Jamila Bey, and on and on… and Hemant!

But Hemant will be doing more than giving a talk on “The Need for Critical Thinking in Public Schools”. This year we’re also presenting Hemant with the 2011 Freethought Backbone Award.

Every year our national conference, the Secular Student Alliance presents the Freethought Backbone Award to an individual within the freethought movement who is a guide and inspiration for secular students and student groups – someone who has demonstrated a commitment to the secular values of scientific and critical inquiry, democracy, secularism, and human-based ethics.

In the past this award has been presented to such notable figures as Ellery Schempp, plaintiff in the landmark Supreme Court case Abington vs. Schempp; Herb Silverman, president and founder of the Secular Coalition for America; Dan Barker, Co-President of the Freedom from Religion Foundation; and Lori Lipman Brown, former Director of the Secular Coalition for America.

It’s rare for the honor to go to someone so young – Hemant is only 28 – but his impact on the secular student movement has been incredible. From an organizational standpoint, he’s been involved for years. In college, Hemant helped establish UIC’s first secular student group, he served as CFI’s student president, and was on the Secular Student Alliance’s Board of Directors (acting as Chair of the Board for 5 years) for so long he got term-limited off.

But it’s what he’s has done outside the organizations that really sets him apart. Hemant has been an excellent role model for the kind of positive engagement I wish we saw more often. His book, “I Sold My Soul on Ebay” is a story of his experience visiting churches to share his outsider perspective with them. He’s continued engaging with “the other side”, speaking at churches and religious events to present the friendly face of a nontheist. I remember his talk for the 2010 SSA Conference, where he told the room full of student leaders how productive it had been to reach out to Laurie Higgins of the anti-gay Illinois Family Institute to get coffee with her. I can’t think of a better “guide and inspiration” for secular student leaders to follow.

It’s because Hemant lives humanist values of critical thinking, respect and compassion. Though he’s no longer on the SSA Board of Directors, he’s now Board President of the Foundation Beyond Belief – an excellent nonprofit devoted to creating a culture of nontheistic involvement in charitable efforts. Besides that, he uses his online reach to help others. When Damon Fowler was being thrown out of his home for being a nontheist, Hemant rallied the secular community to raise over $30,000 toward Damon’s college fund. Since we atheists don’t have as many in-person gatherings, it’s remarkable to see the internet being used so effectively to provide that support.

Not only is the Friendly Atheist blog bringing the secular community together around humanist ideals, it’s bringing more people into that community. There’s no telling how much of an impact this blog has had on people questioning their faith, curious about atheists, or long-time doubters looking for others who think like them. For years, the Friendly Atheist community has been a place for all of them.

Sorry to gush, but I really am proud. I’m proud to be a part of Hemant’s Friendly Atheist blog, proud to consider Hemant a friend, and proud to see him honored with this award. Congratulations Hemant Mehta on being presented the Secular Student Alliance’s Freethought Backbone Award of 2011.