No Wonder Sita Sings the Blues…

Last week, the beautiful animated movie Sita Sings the Blues was going to be screened at Starlight Pavilion in Queens, New York. 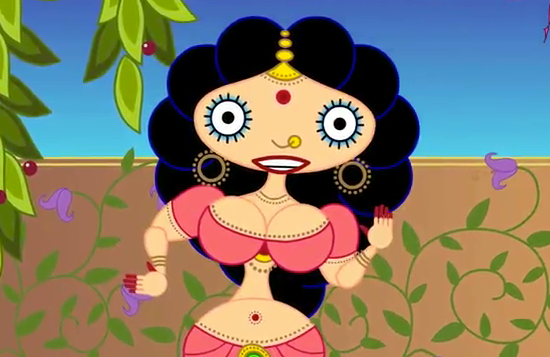 If you haven’t seen it, set aside some time and watch it:

Roger Ebert, who words contain more truth than you’ll ever find in a Holy Book, loved the film.

Anyway, I say it “was going to be screened” because that never actually happened thanks to a group of Hindus who say the film is offensive:

Rohan Narine, a 26-year-old real estate broker who is a Guyanese Hindu, has been trying since April to screen the film in his area, and had to change the venue twice. His first choice was Shri Trimurti Bhavan in Ozone Park, a temple where his uncle is a priest. But when his uncle saw the film, he didn’t like it — particularly because in the animation film, Sita appears somewhat buxom. Besides, he didn’t like the language, or the fact that some characters were from Brooklyn. On July 20, the latest venue — Starlight Pavilion — developed cold feet as the protest emails crossed the 1,000-mark, each carrying nearly identical text.

An organization that calls itself Forum for the Hindu Awakening protested the film. The emails called the film denigrating and insulting, and said freedom of expression cannot be absolute. A worried Pastor Mathew John, who owns the pavilion, decided to cancel the screening.

Here’s exactly what the Hindu group told followers to send in their emails:

… We would like to bring to your attention that ‘Sita sings the blues’ denigrates Hindus’ revered scripture Ramayan, and Deities Rama and Sita.

People from different faiths live in America and it is important to maintain sensitivity towards each other’s religion, to live harmoniously. Denigration of religious symbols and icons causes disharmony, as it hurts the sentiments of the community being targetted.

How exactly does this movie denigrate Hinduism? It doesn’t. But there are scenes that don’t always show the scripture in the most favorable light and how dare anyone interpret the Ramayana in anything but rose-colored glasses?! A full list of complaints is on their website.

A couple examples of the “issues” from this thin-skinned group:

5. False representation : Sita sings with her love for Ram in the forest. The words of her song were… ‘He is not an angel or a Saint and I know that with all his faults, he will still get by’. Then she imagines carrying Ram piggy back. After that she stands on all her fours (like a horse or a dog) and Ram is shown sitting on her back.

(Editor’s comment : This is outright insulting to the faith of Hindus and destroys the reverence for the Ramanyan in children’s minds.)

Key word: “Imagines.” It’s an interpretation of a holy book. Not an anti-Hindu sentiment.

(You want anti-Hindu sentiment? The Ramanaya is full of made-up stories and no one should take it seriously. Booya.)

11. False representation : Sita sings a song saying ‘Ram is mean to me’ and Lord Ram is depicted kicking Sita into the fire at the time of her agnipariksha (Test by fire) and He kicks her at the time of banishing her from the kingdom. Lord Ram nonchalantly also walks over Sita’s pregnant stomach

(Editor’s comment : Does the US government allow its citizens to disrespect and demean other religions ? After being notified about how infuriated the Hindu community is with her film, if the US government does not take any action against her, it will be tantamount to approving of her actions.

Actually, yes, the U.S. government does allow freedom of speech. That includes the right to criticize religion (or, in this case, depict it with liberal interpretation). Just because it’s allowed by the government doesn’t mean it’s endorsed by them. How does this group not know that?!

Also, learn to close your parentheses. That’s more offensive than anything in the film…

There’s nothing anti-Hindu about this film. If anything, by drawing parallels from the Ramayana to her own life, the creator Nina Paley found a way to make the Hindu mythology somehow relevant.

But that doesn’t matter to the Forum for the Hindu Awakening. They’re asking people who have presumably never seen the film to fake outrage and complain about something that doesn’t affect them. It’s unfortunate that Starlight Pavilion canceled the screening because of them, but when it comes to religious purists, you have to be cognizant about the security concerns…

There’s somewhat of a happy ending, though.

Narine did a wonderful thing by screening the movie at his parents’ home — with an audience — and following it up with a productive discussion.

I especially love these words from Sunita Viswanath, a board member for the group Women for Afghan Women

“Attacking this film is an act of such ignorance and small-mindedness when Hinduism is expansive and lends itself to unlimited questioning by its adherents. As a Hindu raised by devout Hindu parents and raising three Hindu sons, I have to say that the people who have a problem with Sita Sings the Blues do not represent me. In fact, Sita Sings the Blues is a wonderful way to keep Hindu mythology alive.”

Absolutely. (And thanks for calling it “mythology”!)

(Thanks to Bruce for the link)

July 25, 2011 An Easy Way for Atheists to Help a Good Cause
Browse Our Archives
What Are Your Thoughts?leave a comment