There’s Bacteria on the Cracker; Must Be a Miracle! July 23, 2011 Hemant Mehta

There’s Bacteria on the Cracker; Must Be a Miracle!

A Catholic priest molests a little boy and the Church sits on the issue for years. A communion wafer turns red and they’re on it faster than you can say “cracker.”

The story is that a consecrated wafer fell on the floor. They placed it in water. But it didn’t dissolve. Instead, it turned red.

The archdiocese, which now has the host, is taking a “very cautious stance on the matter,” spokesman Dennis McGrath said.

“I make no claims, and the archdiocese makes no claims, as to the likelihood of this being supernatural,” [St. Augustine Church Rev. John] Echert said. “But it is enough of a phenomenon, or unusual, that we will continue to examine this host.”

He added: “I’ve never in my 24 years as a priest seen or been aware of a phenomenon where a consecrated host placed in water turns to this bright-colored red and continues in what I would call the blood-red color.”

Word of the wondrous wafer eventually landed on several Catholic websites and blogs, sparking discussion and conjecture by some that it resembles the flesh and blood of Jesus Christ.

Oh. By the way. Some scientists have weighed in on this, too:

According to Microbe Zoo, a website developed by the Center for Microbial Ecology at Michigan State University, the [Serratia marcescens] bacterium grows on bread and communion wafers that have been stored in a damp place.

The site goes so far as to cite Serratia marcescens as the probable cause of the bloodlike substance that a priest discovered on communion bread in 1263, referred to as “The Miracle of Bolsena.”

(SHHHHHH. You’re gonna ruin the magic trick! Why do you all hate Jesus so much?!)

Something similar happened back in 2006, and there were natural explanations then, too. Even Catholic officials admitted as much:

According to a report on Texas Catholic Online, the Dallas Diocese had the host analyzed by two University of Dallas biology professors who concluded it was anything but a miracle.

In a letter to the parish priest, Dallas Bishop Charles Grahmann wrote “… the object is a combination of fungal mycelia and bacterial colonies that have been incubated within the aquatic environment of the glass during the four-week period in which it was stored in the open air.”

None of that will stop the Archdiocese of St. Paul and Minneapolis from investigating the claim, as if there might actually be a miracle at play.

And Catholics wonder why atheists don’t take their beliefs seriously…

Speaking of being taken seriously, why is the St. Paul Pioneer Press even bothering with this poll question? 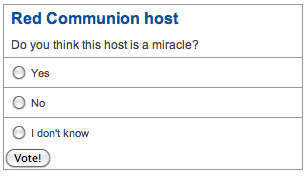 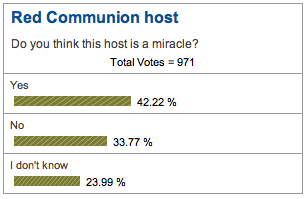 Yeah, yeah, I know they have the poll up there just to get cheap hits on their website… and, dammit, they win. Go Pharyngulate the poll and make things right!

July 23, 2011
An Evolution-Related Victory for Texas Schoolchildren?
Next Post