… Poles celebrate a holiday in June called Corpus Christi. It might not be as popular in the US, but here, traffic is banned in whole towns for hours because of the processions. These ‘parades’ can be very loud, take up police time, block traffic, and if any other religion or denomination wanted this kind of privilege, they would not be able to get it. Very recently, a brave person protested against that obvious religious intolerance by dressing up as a butterfly and running around during the procession.

Mind you, he touched no one, caused no harm or disruption, and was even quiet. Now he may be awaiting trial because a priest felt offended and reported a crime. Outrageous.

I don’t have any other details on the case, but the picture is priceless: 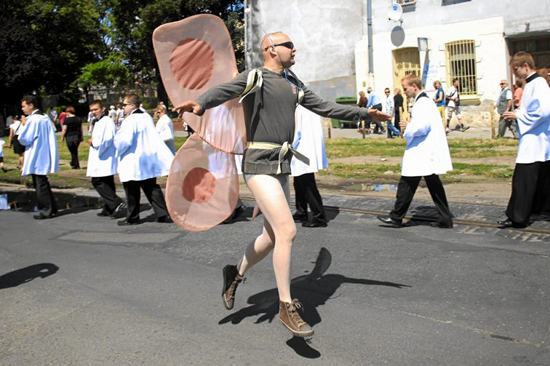 ***Update***: This article has more information on the story. (Thanks, Preston!)