Earlier this morning, President Obama did a town hall meeting at the University of Maryland and when it came time for the Q&A session, guess who was first up?

Amanda Knief, the Government Relations Manager for the Secular Coalition for America! How perfect is that?!

She asked an important question, too. 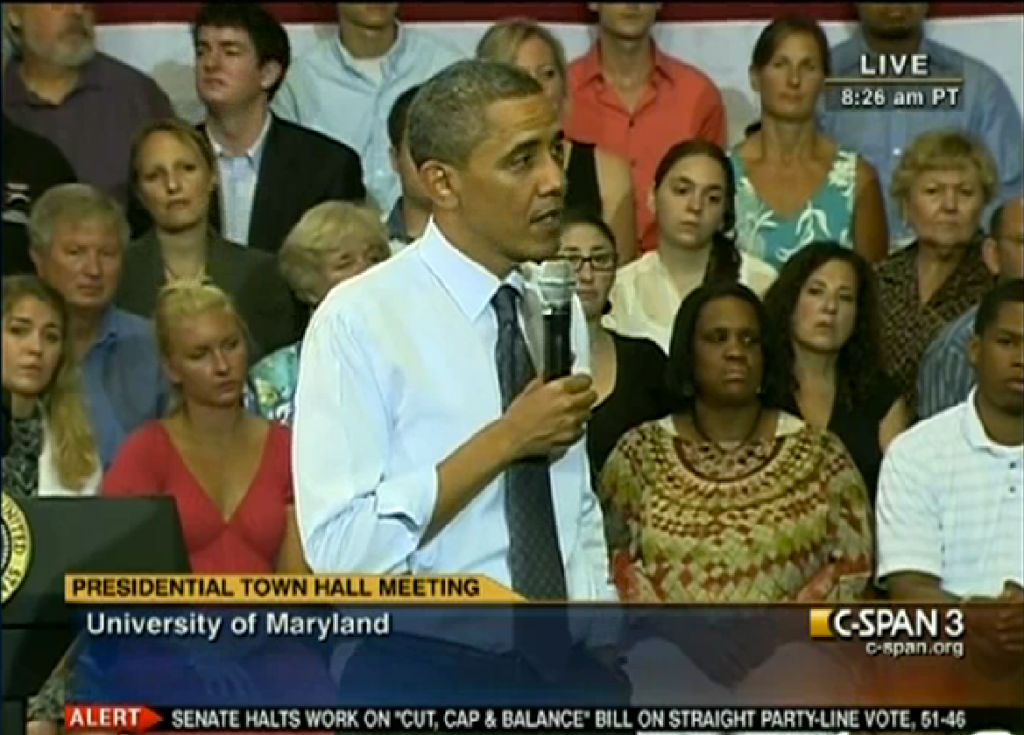 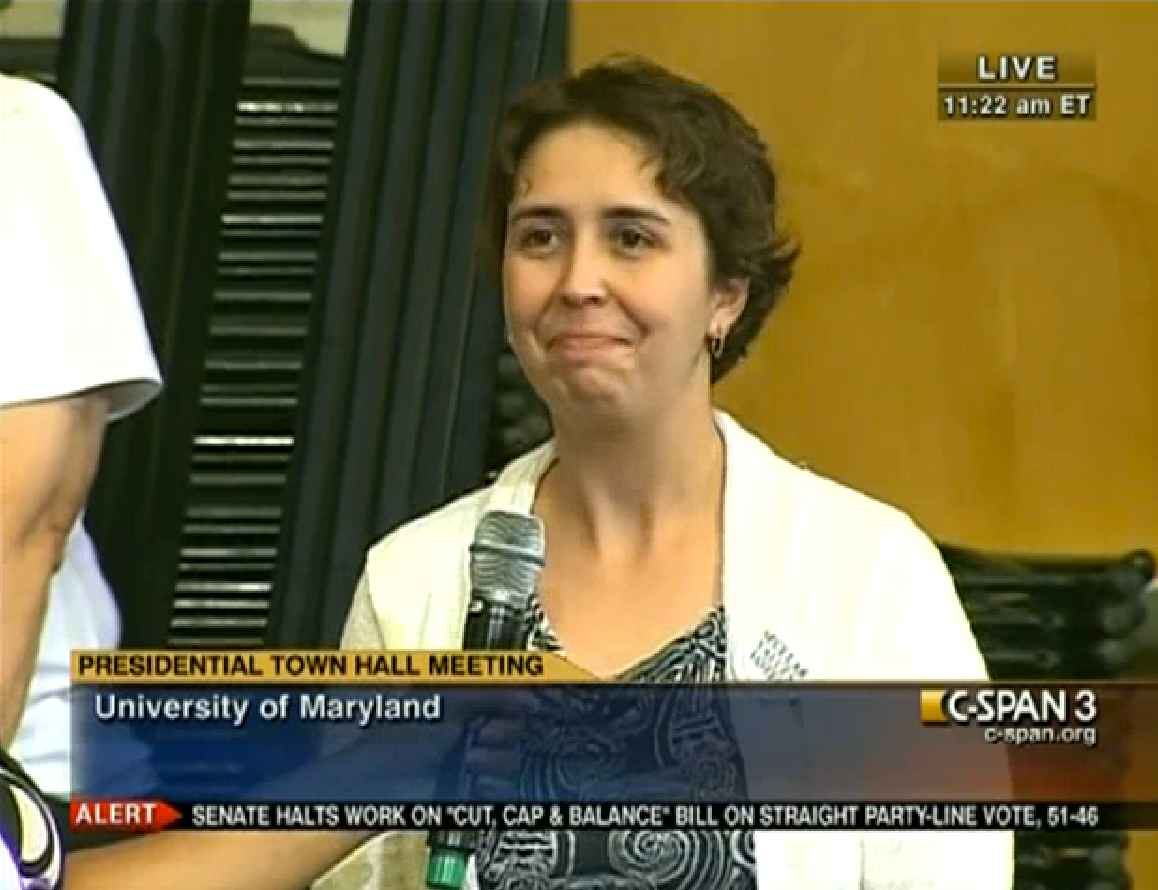 Knief: I’m an atheist, and in Zanesville, Ohio in 2008, you asserted that no organization receiving taxpayer funds would be able to discriminate in hiring or firing based on a person’s religion. However, you have not rescinded the Executive Order that permits this type of discrimination.

In a time of economic hardship, when it’s difficult for a person to get a job based on her skills, what would you say to a woman who has been denied employment because of her religion or lack of religious beliefs by a taxpayer-funded organization?

Obama: Well, this is a very difficult issue, but a more narrow one that I think might be implied. It’s very straightforward that people shouldn’t be discriminated against for race, gender, sexual orientation, or religious affiliation.

What has happened is that there has been a carve-out dating back to President Clinton’s presidency for religious organizations in their hiring for particular purposes. And if — this is always a tricky part of the First Amendment. On the one hand, the First Amendment ensures that there is freedom of religion. On the other hand, we want to make sure that religious bodies are abiding by general laws. And so where this issue has come up is in fairly narrow circumstances where, for example, you’ve got a faith-based organization that’s providing certain services. They consider part of their mission to be promoting their religious views.

But they may have a daycare center associated with the organization, or they may be running a food pantry. So then the question is: Does a Jewish organization have to hire a non-Jewish person as part of that organization?

Now, I think that the balance we’ve tried to strike is to say that if you are offering — if you have set up a non-profit that is disassociated from your core religious function and is out there in the public doing all kinds of work, then you have to abide generally with the non-discrimination hiring practices. If, on the other hand, it is closer to your core functions as a synagogue or a mosque or a church, then there may be more leeway for you to hire somebody who is a believer of that particular religious faith.

It doesn’t satisfy everybody. I will tell you that a lot of faith-based organizations think that we are too restrictive in how we define those issues. There are others, like you, obviously, who think we are not restrictive enough.

I think we’ve struck the right balance so far, but this is something that we continue to be in dialogue with faith-based organizations about to try to make sure that their hiring practices are as open and as inclusive as possible.

It doesn’t look like he’s doing anything to fix this problem. He’s not going to rescind the Executive Order. He’s going to continue allowing federal funding to go to groups that are more concerned with promoting their faith that providing a service for the common good.

I think Amanda’s reaction to his response speaks for a lot of us: 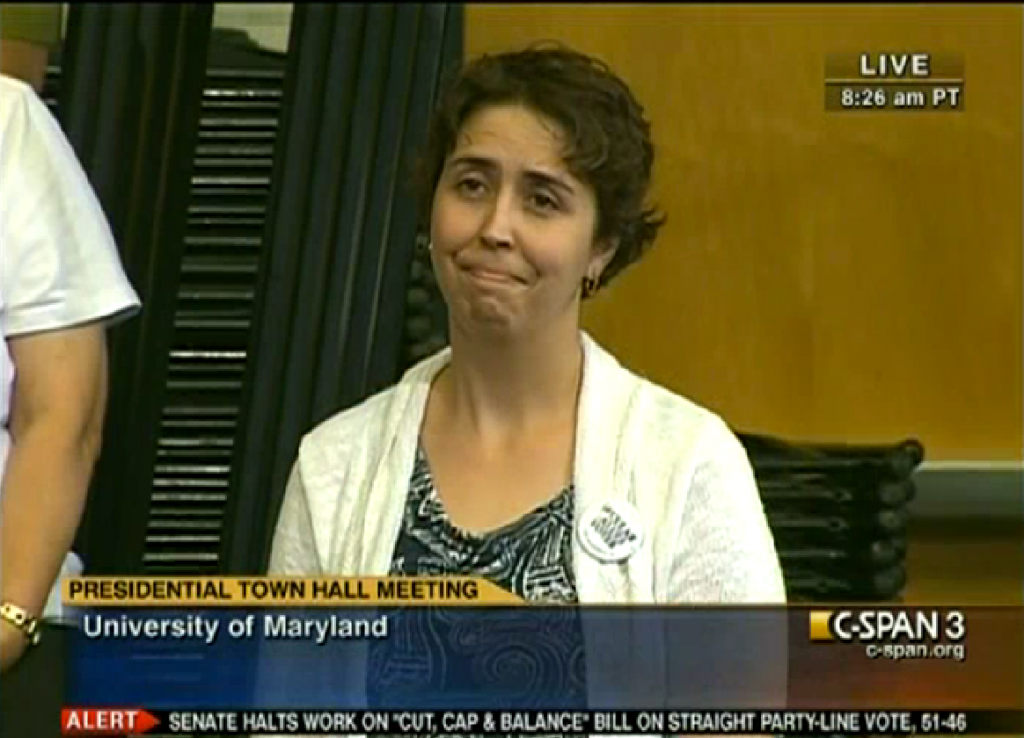 It’s the look that says: “Really, Obama…? That’s the best you got? Damn, you’ve really disappointed us.”

***Update***: According to an SCA press release, Knief wasn’t satisfied with the response:

“Unfortunately, the president didn’t address the most egregious aspect of this policy — that religious discrimination is occurring on the taxpayer’s dime,” Knief said. “Discrimination is wrong in all forms, especially when it is being funded by taxpayers. I would urge the president to reconsider the statements he made today, and stick to his campaign promise of 2008 by signing an executive order barring any taxpayer funding of religious organizations that discriminate on the basis of belief.”

… The question here is whether any organization that receives taxpayer dollars can discriminate in hiring based on religion. And that was the question Obama didn’t answer.

So when Obama says the Jewish food pantry, for example, has “to abide generally with the nondiscrimination hiring practices,” he’s dodging the real question: why he won’t rescind the Bush rule, and prohibit any organization that receives federal funding from discriminating based on religion in hiring. An organization like World Vision, for example, is not a church but a 501(c)(3); it receives federal funding. Its president, Richard Strearns (who also served on the first Advisory Council to Obama’s faith-based office) has long argued that his and other organizations should be able to discriminate against employees, and it has fired employees who denied the “deity of Jesus Christ” and “the doctrine of the Trinity.” Last year, World Vision received over $100 million in federal dollars.

July 22, 2011 Stop Calling Ricky Gervais' New Show An 'Atheist Comedy'
Browse Our Archives
What Are Your Thoughts?leave a comment