Kathleen Crowe says her nine-year-old daughter Angeline was playing in MacEwan park last week when she was approached by a couple from the Victory Christian Center who gave her candy and a Bible verse. Angeline was also promised more candy if she memorized the verse.

“What if the next person who offers her candy doesn’t have the same good intentions as the church? That’s always a fear in the back of every parents mind,” Crowe said.

Hmm… I’d be freaked out if the next person offering her candy had the same intentions as the people from the church.

It’s scary to think about either way.

As if the story wasn’t bad enough already, the Bible verse they handed out was in Comic Sans. (Why won’t they think of the children?!) 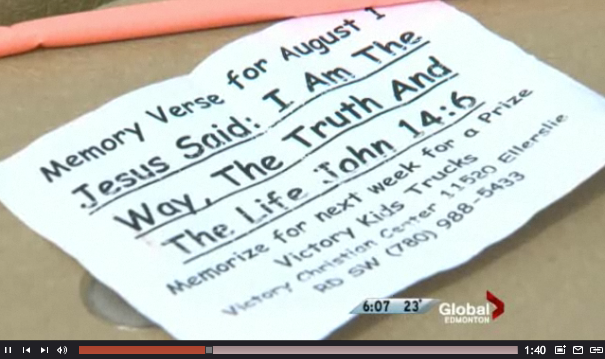 None of this is very surprising, though. This is what churches do — they go after kids who don’t know any better. Might as well brainwash them from the get-go.

(Thanks to Ashley for the link!)