I’ll set you up: A church near New Orleans was given $250,000 to help build “low-income housing for recovering addicts.”

Take a wiiiiiild guess how this story ends.

Yep! You’re right. Not all the money was used for the intended purpose! In fact, most of it went right back into the church itself. And into the wallet of its leader.

The Living Witness Church of God in Christ in Central City, Louisiana received all that money to build “low-income housing for recovering addicts.” However, a state audit released yesterday (PDF) shows what really happened with the cash:

As of March 29, 2010, Rev. Pierre had spent the entire $250,000. However, he only spent $114,915 of the $250,000 in accordance with the grant. He used the remaining $135,085 to pay the organization’s “daily operating expenses.” In addition, as of March 29, 2010, the building was still in complete disrepair and uninhabitable, and neither the church nor the Social Service organization had funds available to make the repairs and renovations it originally agreed to do.

The inspector general said much of the money was comingled. Its examination of church bank accounts found that in 2008 and 2009 Pierre issued himself 11 checks totalling $32,810, “including a $20,000 check … classified as an anniversary gift.”

He also paid himself $41,000 in regular housing allowances, the report said.

During the March 29th inspection, here’s what the building that was supposed to be fixed up with the quarter-million dollars looked like: 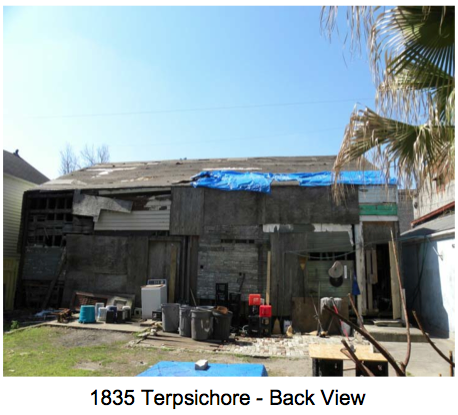 How the hell are you supposed to recover from a drug addiction when you live in a place like that…?

The Inspector General is suggesting that the state work to get its money back and consider criminal prosecution. More power to them — I hope they get this conman.

No doubt some churches can handle this kind of money effectively, but without better accountability and harsher punishments, it’s not a surprise to see some of them abuse the privilege. They’re no more moral than any other group of people. So why does our society give them undeserved respect as a whole? We’re better off giving the money to secular agencies with leaders who can be held accountable for the responsibilities they’re tasked with — who care more about the people needing the housing instead of their own bank accounts.