Hey everyone, its Jen. Hemant’s on the next panel, so you’re stuck with me again. Speaking of the next panel, it’s Diversity in Skepticism moderated by Desiree Schell, with the panel including Greta Christina, DJ Grothe, Debbie Goddard, Jamila Bey, and of course Hemant. 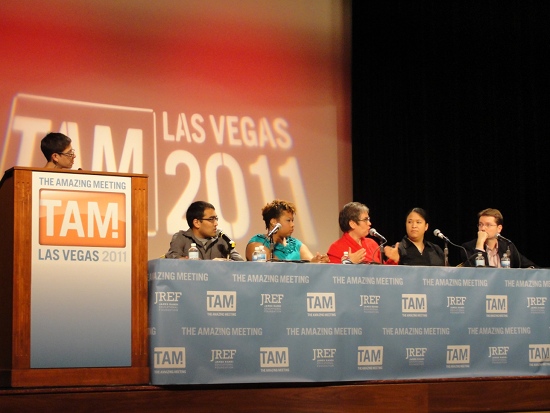 (Side note: this was the worst possible time spot in the program. It was after a far too short lunch – most people were still in line for food. And it’s at the same time at the US women’s soccer match. Boo)

The panel is going to be talking about gender, race, sexuality, disability, age, and class. The first question is an easy one – is this important? Yes, duh. My favorite line from Greta – “For purely Machiavellian reasons, it makes our movement stronger. It puts butts in seats.”

DJ notes that the skeptic movement is already a diverse community. There’s room to grow, but it’s improved since it once was. Hemant agrees, but he’s concerned with how we’re getting that diversity. Do we make groups for specific types of people, or to just incorporate it into the larger movement.

Jamila asks the audience to look around. If we include more people who are underrepresented, it’ll just improve the movement. Greta adds that we’re getting better, but there’s a huge amount of room to grow. Every time there’s a new diversity related kerfuffle, minorities express that they don’t want to get involved and deal with it. A minority with show up to one or two meetings, but they just don’t feel welcome if it’s all white men. And that’s really self perpetuating, so we have to be proactive, like having more diverse speakers.

DJ makes a point that it is hard work. That you just can’t automatically expect that you’re welcoming. JREF has gone to great lengths to make the speakers more diverse. But he’s gotten emails from white guys who are conservatives who don’t feel welcome, so we need to be welcome to diversity of thought too. What matters is sharing skeptical values.

Desiree asks what specifically we can do to improve inclusiveness. Greta notes that the main point is listening to what concerns people have. Debbie adds that broadening the types of topics we discuss is also likely to bring in a diverse group a people.

Jamlia adds that if we care about the state of everyone, we need to be outspoken about police brutality, the drug war, and crime. In less affluent neighborhoods, who’s the first to respond when a poor black child gets shot? “Reverend Blahblahblah” We need to offer some social programs. We love hard facts and evidence, but we also need to understand that the people who need us may not be drawn in just by meeting Neil deGrasse Tyson (as crazy as that sounds to us).

DJ Grothe disagrees, saying the great thing about skepticism is that we don’t have one set of beliefs. Jamila responds that she’s not asking for dogma – we agree that holding a prayer rally to balance the budget is ridiculous. We don’t need one voice, we need a voice in our community.

Greta replies, saying that we can totally apply skepticism when asking if things like the war on drugs, abstinence only education, and No Child Left Behind work (Hint: No). We may not 100% agree, but we should still speak up. DJ still disagrees, saying that historically skepticism has been about evidence, not social movements. Uh, who the hell cares about history when we’re trying to make things better?

Jamila disagrees. This is our issue. Logic says we need more foster parents. Logic says a religious book shouldn’t dictate politics. That’s something we need to talk about. DJ still disagrees, arguing from historical skepticism. “Then you will get the audience that you have” responds Jamila.

Greta: What you’re saying is historically we had issues that were interesting to middle class educated white men, and we should still only talk about those issues. That’s why we’re not attracting diverse people.

Hemant thinks these are great things individuals can do, but maybe not the movement so we don’t dilute our topics. But Debbie adds that we can just add a couple more issues, it’s not a main organizing principle. DJ says he doesn’t want to be telling people the content that people should believe, that we should just talk about the methods of critical thinking. He doesn’t want reorganization away from science and to politics.

Observation: From looking around, only white dudes were clapping for that. SHOCKING.

Hemant, what have you done letting me blog the diversity panel? I’m going to convert your blog to a feminist cesspool.

Hemant asks if talking about the drug war would bring in new people. Debbie says that one group had one speaker talk about skepticism in women’s makeup, and they got a new audience. DJ asks if those people are going to keep coming back, though. Jamila and Debbie and Greta enthusiastically say yes. They get in from maybe one issue, they meet people they like, they make friends, they have fun, and they build communities.

Q: Don’t we have stuff we can contribute to stuff like cases of police brutality?

Sure. We can talk about gathering evidence and eye witness testimony.

Q: The core of the skeptic movement would have to always be focused on science and then also those topics that are the traditional ones, as opposed to other issues that are fair game to apply science, but it’s not the core of the issue.

Jamila disagrees that science isn’t the core the issue. She’s not saying that that should be the focus of skepticism, but that looking at issues that are important to people, you find a lot of misinformation. If we can get our voice out there, that’s obviously a good thing.

Debbie: “We don’t care enough about people about this movement.” We ignore huge parts of the population. Women get interested in skepticism because of stuff like the Hug Me I’ve Vaccinated program exists. Greta adds that these issues aren’t mission drift. We’re just applying our mission to topics that will bring in more diverse people.

Hemant says you get that message out there on a local or individual level, not a huge thing like TAM. This should be the core group, the base.

Q: Can’t we still discuss things we don’t necessarily agree on, but just have the sides discuss the evidence?

DJ says many of us may be allies of feminism, or gay rights, but we shouldn’t become all things to all people. But Greta says that’s not what we’re saying. We can stay focused on our mission of critical thinking and just say “Hey, this applies to issues that we haven’t historically focused on!” Debbie has the impression that we don’t do enough. We sit around and talk about it too much. We will attract new people by doing these new things.

Annnnnd we’re done. Without Elevatorgate coming up at all. Kind of amazed.

Next up is Jennifer Ouellette, with The Universe Through the Looking Glass. 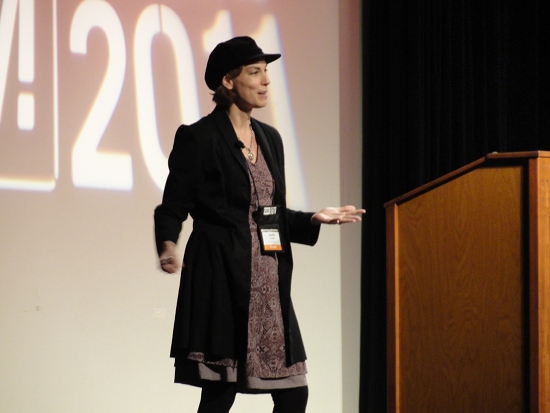 Apparently we’re going to be whizzing through physics and astronomy, which means my reporting will probably be horrible. I apologize ahead of time.

Ptolemy. Something. Oh FSM, I want to go to sleep so badly.

…Sorry Jennifer. I feel a certain kinship since we share a name, but I’m burnt out. I’m going to stare at your pretty photos while Hemant snarfs down his very very late lunch.

We just watched the opening sequence from Contact. My favorite movie, so I’m happy. Yep, still at this level of comprehension.

Sean Faircloth is up next, talking about Attack of the Theocrats — and What We Can Do About It. 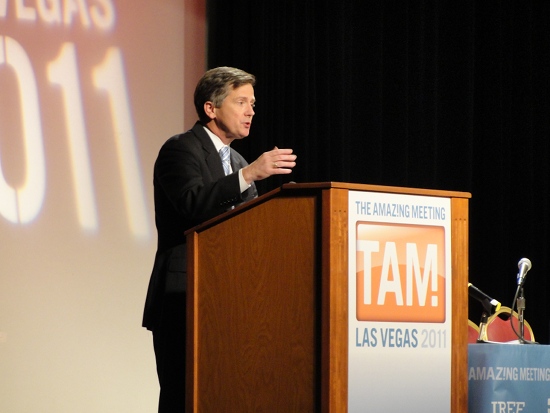 Hi! It’s Hemant. I’m back to wrap things up while Sean is talking. My airport shuttle leaves in about 20 minutes so my apologies to Sean for not properly covering his talk. It’s about theocrats. And what we can do about that. (Bet you didn’t see *that* one coming from the talk’s title.)

Great laugh line from Sean: “I have a modest plan… TO TAKE OVER THE UNITED STATES!”

Sean knows how to work a crowd — Yes, Secular Americans have opposed this… but we’ve also DONE THAT! — and he’s getting a lot of applause with his rhythmic, patterned rhetoric. It’s like he’s reading a Greta Christina post.

Because I can’t cover Sean more extensively, here, have an extra picture: 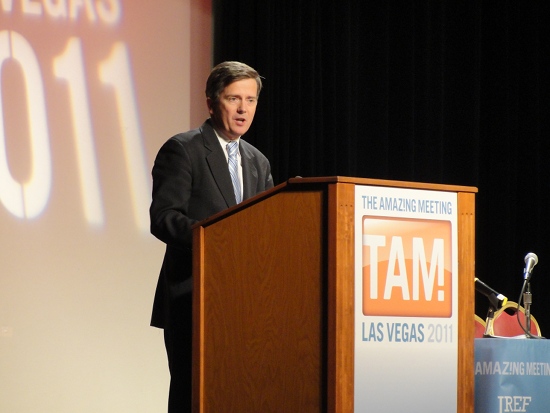 Bye, everyone! Thanks to JREF for this opportunity, and thanks to Jen, Jamie, and Ashley for stepping in when I needed some help!