Alright… after a couple interviews, I’m back just in time to catch the end of Carol Tavris‘ speech, in which she talks about Dissent and Dissonance. There are soundbytes left and right — according to one Tweeter, it sounds like it was the Don’t Be a Dick speech, but with specific examples and a focus on practicality. She mentions that our movement is large and there will inevitably be significant differences of opinion. We need to find a way to work through that. 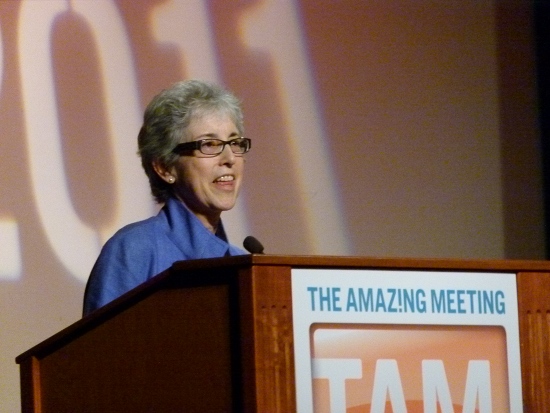 It’s Bill Nye! His talk is called “Bringing them around with our place in space.” 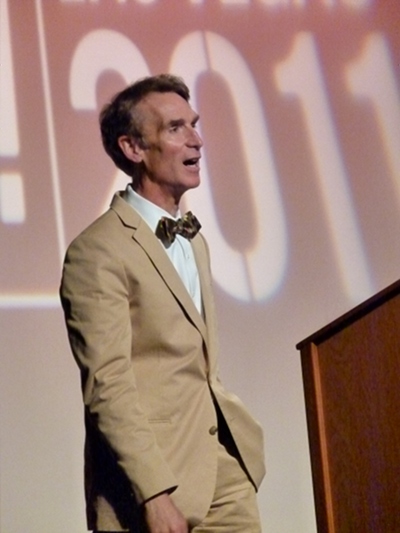 First up is a story about how Ripley’s Believe It or Not said that bumblebees were aerodynamically unable to fly! Nye knew that was wrong and became skeptical at a young age.

He went to Cornell, where he learned Astronomy under Carl Sagan. He shows a picture of him with Sagan that totally belongs on this site.

When Nye began his show, Sagan sent him a letter saying he had seen it, adding, “Also, I thought I caught a few conceptual errors.” 🙂 But Nye backed up what he said on his show.

Another time, Nye gave a lecture at a community college and mentioned that, unlike the account in the Book of Genesis, the moon does not give off its own light. Rather, it reflects light. A lady screamed, “We believe in god!” and stormed out. Yikes.

Now, we’re talking about going to Mars. Sweet. There was a time we could imagine going to Mars, finding water, possibly finding microbial life, and, oh, how that would change the world! But we’re not going to be exploring space more anytime soon. 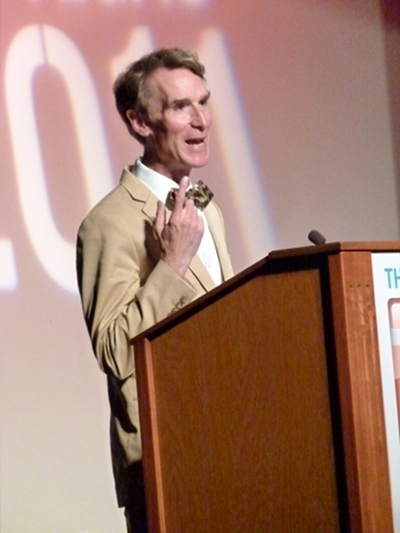 In October of this year, Earth will have more than 7 billion people. This alone is evidence for climate change, because that many people doing stuff (“Can I say stuff?” asks Nye) will affect our climate. 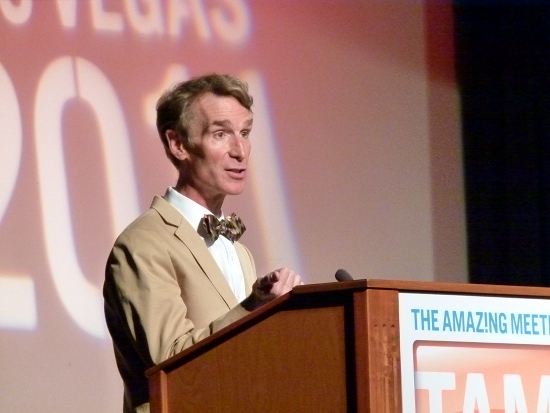 There’s a lot of talk about the amazing things the Planetary Society, which Nye is the Executive Director of, is doing. You can get a gist of them by looking at the “Innovative Technologies” section of this page.

Nye is channeling a bit of Sagan, too, talking about how this planet is all we have and why we must protect it. We’re on a pale blue dot, after all. But we have the ability to do that and we have all the social media we could ever want to create a real change. Gil Scott-Heron was wrong when he said “the revolution will not be televised.” 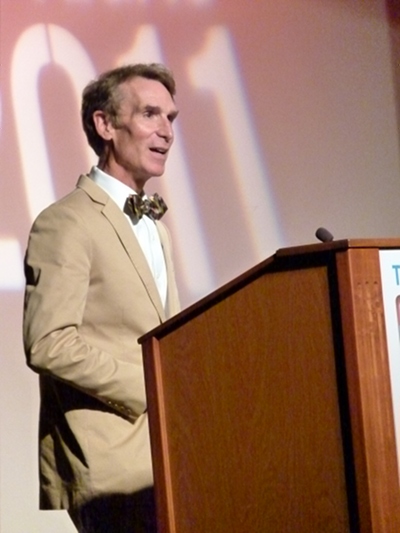 The last line of his talk: “With science, we can — dare I say it — change the world!” 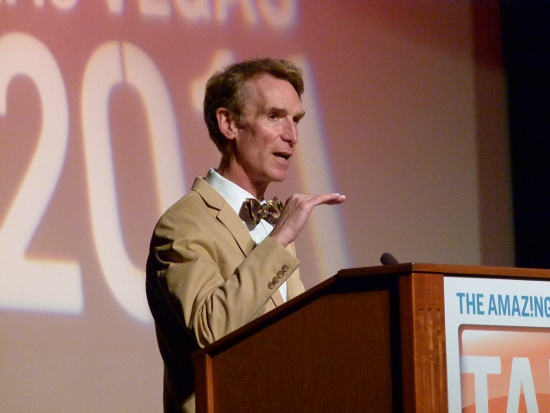 The last talk of the night is from Richard Dawkins, who will be talking about his forthcoming book aimed at young adults The Magic of Reality: How We Know What’s Really True. It’s an exclusive sneak preview!

He’s introduced by James Randi, who praises two of Dawkins’ previous books The Blind Watchmaker and The God Delusion. 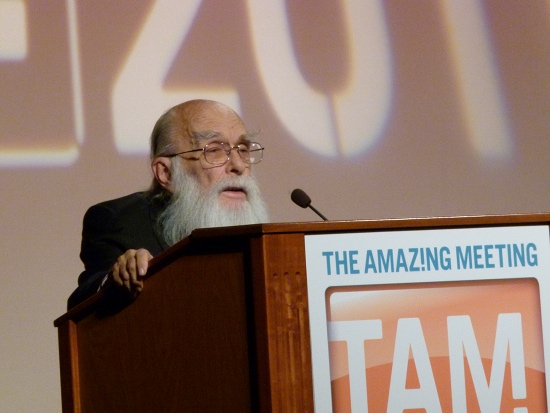 Last year, Dawkins just participated in a Q&A, so it’s a nice change at TAM to hear him give a talk.

You have to wonder if Dawkins is going to address ElevatorGate… in the introduction, he doesn’t mention it.

He asks everyone that he’s only showing us a preview of the book with the understanding that it doesn’t leave the room — no video or photos. Umm… good luck with that.

There are three types of magic Dawkins will discuss in the book: 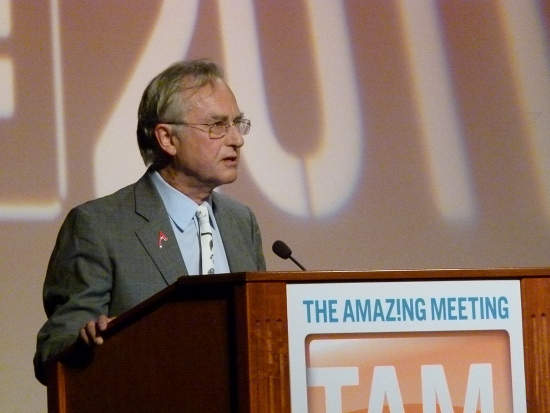 In each chapter, Dawkins will talk about the myth before he talks about the reality. For example, in the chapter asking “Who was the First Person?” He’ll mention the Christian answer (mixed in with all other religious/cultural nonsense) before saying the truth: There was never really a “first person.”

That goes on for a while. Where do the light and day come from? What is a rainbow? When and how did everything begin? What is an earthquake? Why do bad things happen to good people? What is a miracle? The myths will be followed by the scientific truths. 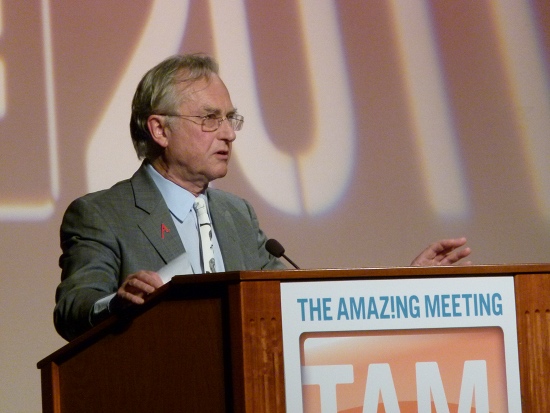 Once again, we have a speaker who’s (literally) telling us about his book, things we can read for ourselves. While it’s really exciting to see an exclusive preview of Dawkins’ new book, I feel like it’d be more entertaining to hear how the book came about or which chapters were the most challenging to write.

Since it’s TAM9, Dawkins is going to go in some depth about Chapter 9: “Are We Alone?” (Eerily perfect for this conference…)

If we are alone, though, think about how rare it would have to be. Virtually impossible. So the notion of recreating the origin of life in a lab is just silly. What you want, then, is a “staggeringly implausible theory”! Dawkins doesn’t think that’s the case. He thinks it’s more likely there are indeed other forms of life out there.

Defining “intelligent life” is another question, Dawkins says, as he puts up images of Michele Bachmann and Sarah Palin 🙂 (And some commenters are Twitter are whining about how he put up images of two women. That wasn’t his point…)

So let’s say intelligent life exists out there. What would it look like? How much of what we know about life here would be true of those life forms? Just because things are true for us, would it also be true for them? (Sure, this is speculation, but Dawkins finds them to be interesting questions.)

Does life have to be Darwinian? Dawkins says it would have to be. That’s really the only thing he’s sure about regarding other life forms.

What kind of event is an origin of life? We don’t even know how it happened on Earth, but we know it must have been the origin of a high-fidelity replicator. Like DNA, though that’s way more complex than what the original replicator would’ve been.

Does it have to be carbon? Does life need protein? What if evolution were re-run? What would happen? (How did Dawkins’ talk turn into a college science class…?)

This is all well and good, but it’s just a rehashing of Dawkins’ previous books. Nothing his fans haven’t heard before. 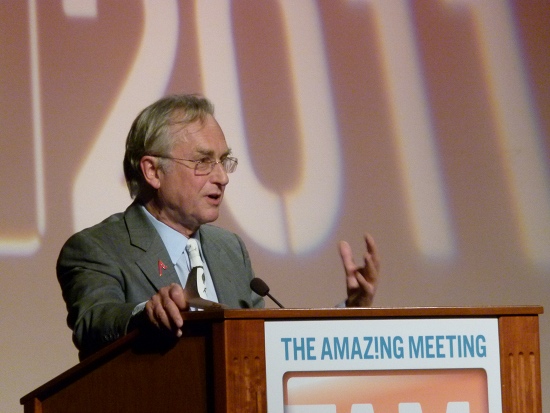 The general reaction on Twitter seems to be that Neil deGrasse Tyson and Richard Wiseman’s talks (and the space panel from yesterday) were the highlights on stage so far. Dawkins is good, but he’s not killing it.

He ends his talk on a very different note: suggesting that we offer childcare at conferences so that mothers/parents can attend — a fantastic gesture. Camp Quest has offered this service for years now at various conferences and Dawkins’ foundation has partnered with them to offer this service at future conferences.

There’s a brief Q&A at the end… nothing too interesting to note. Though I should mention that Chuck Norris is also in the hotel right now for a martial arts conference. Oh, if only the encounters that are now going on in my mind would happen in real life…

Dawkins says he has no idea who Chuck Norris is, solidifying his Britishness and the fact that he really doesn’t pay attention to what happens on the Internet.

That’s it for tonight! We’ll be back tomorrow for the last of the talks.

By the way, a special shoutout goes to Elyse Anders and the Women Thinking Free Foundation. They coordinated it so that over 300 TAM attendees got their Tetanus, Diphtheria and Pertussis (TDaP) Vaccines (for free) in just under 6 hours today. Take THAT, Jenny McCarthy!